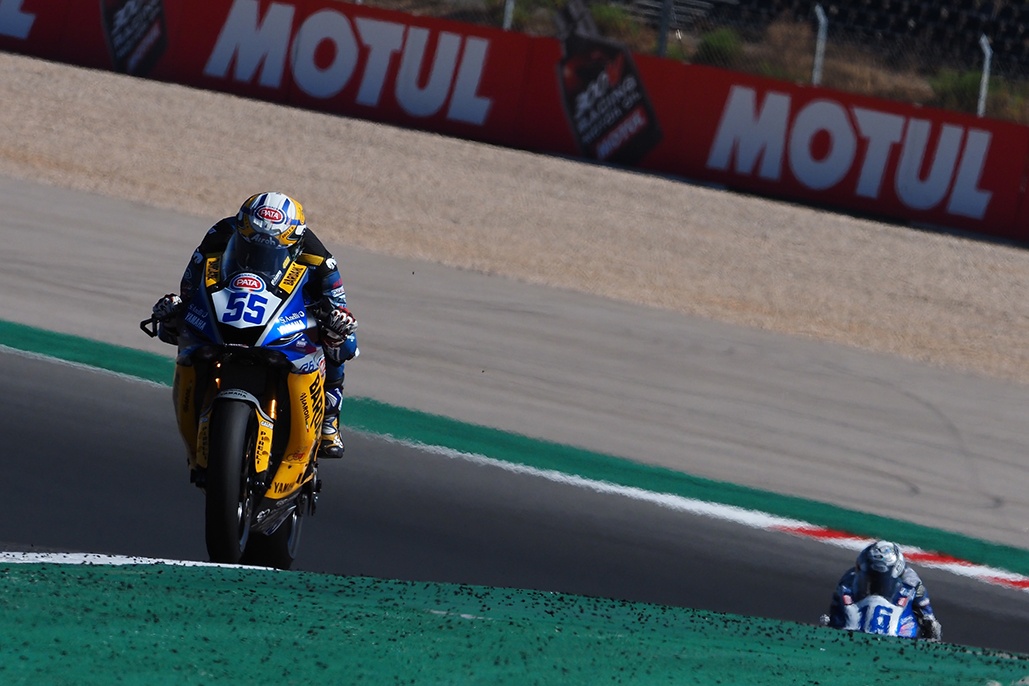 Action in FIM Supersport World Championship resumed with Race 1 at the Autodromo Internacional do Algarve as Andrea Locatelli (BARDAHL Evan Bros. WorldSSP Team) claimed victory at the Motul Portuguese Round as he equalled a record set three years ago by WorldSSP legend Kenan Sofuoglu.

Sofuoglu won four consecutive races in WorldSSP on three occasions, the most recent time coming in 2017, a record Locatelli has now equalled following an epic battle throughout the first 11 laps of the 17-lap race to claim his fourth consecutive victory in his rookie season. Locatelli had been battling with Jules Cluzel (GMT94 Yamaha) throughout the race and, despite pulling a gap of around one second, Cluzel was starting to come back at Locatelli.

He pulled out around half-a-second on Lap 11 to close the gap to 0.6s but while pushing hard to close the gap and apply pressure, he came off his bike at Turn 5. He was able to remount and continue the race, re-joining in sixth place. Lucas Mahias (Kawasaki Puccetti Racing) was able to take advantage of Cluzel’s error to come home in second place with Raffaele de Rosa (MV Agusta Reparto Corse) completing the podium after a titanic three-way battle including a drag race to the line with Corentin Perolari (GMT94 Yamaha) and Isaac Viñales (Kallio Racing).

Perolari and Cluzel initially jumped Locatelli at the start of the race, putting Locatelli under pressure to fight back. Locatelli was able to pass both at Turn 1 on Lap 2 before the Italian battled for a few laps with Cluzel, passing him on Lap 6 before pulling out a gap. It turned out to be the race-winning move to secure his fourth consecutive win; the first time it’s been done to start a season.

Perolari finished in fourth place, jumping Viñales on the run to the line after Viñales lost out to de Rosa and Perolari; the Spanish rider initially passing de Rosa on the final lap at Turn 12, an ambitious move that looked to clinch a podium. However, both de Rosa and Perolari were able to pass him on the run down to the line. The trio were separated by just 0.018s across the line. Cluzel finished the race in sixth place following his crash.

Philipp Oettl (Kawasaki Puccetti Racing) finished the race in seventh place, having almost been in a race of his own as he finished six seconds behind Cluzel but more than one second clear of South African rider Steven Odendaal (EAB Ten Kate Racing). Odendaal had a titanic battle with Hannes Soomer (Kallio Racing) for eighth place, with the Estonian missing out by 0.096s as they raced to the line.

P1 Andrea Locatelli (BARDAHL Evan Bros. WorldSSP Team)
“I have no words because it is incredible. We work very well every time, every session. Winning is our objective and we have succeeded, so far, every time. The feeling today in the race is so difficult because the wind is not so easy, and we need to understand a bit more for tomorrow. I’m confident and we’ll push hard.”

P2 Lucas Mahias (Kawasaki Puccetti Racing)
“It was not an easy race with the start. There was a lot of wind and my bike is not nice in these conditions. The bike is a little bit big and it’s very difficult. Also, the track temperature was a little bit warmer compared to the Free Practice and Superpole and the bike is a little bit strange. When I saw it was not possible to be at the front, I just tried to save the position. After Jules crashed, I reduced the pace because I was a little scared that I would crash because the conditions were really difficult. It’s nice for me, it’s nice for the Championship and also for Kawasaki. Thanks to my team for all this work.”

P3 Raffaele de Rosa (MV Agusta Reparto Corse)
“In the race, I’m very happy because from this morning I had a good feeling but I made a mistake and started from ninth on the grid. I concentrated and tried to get a good start, stay concentrated every lap and never gave up. In the end, I got the podium and I’m very happy. I want to say thank you to my family.”

Championship Standings after Race 1, Round 3