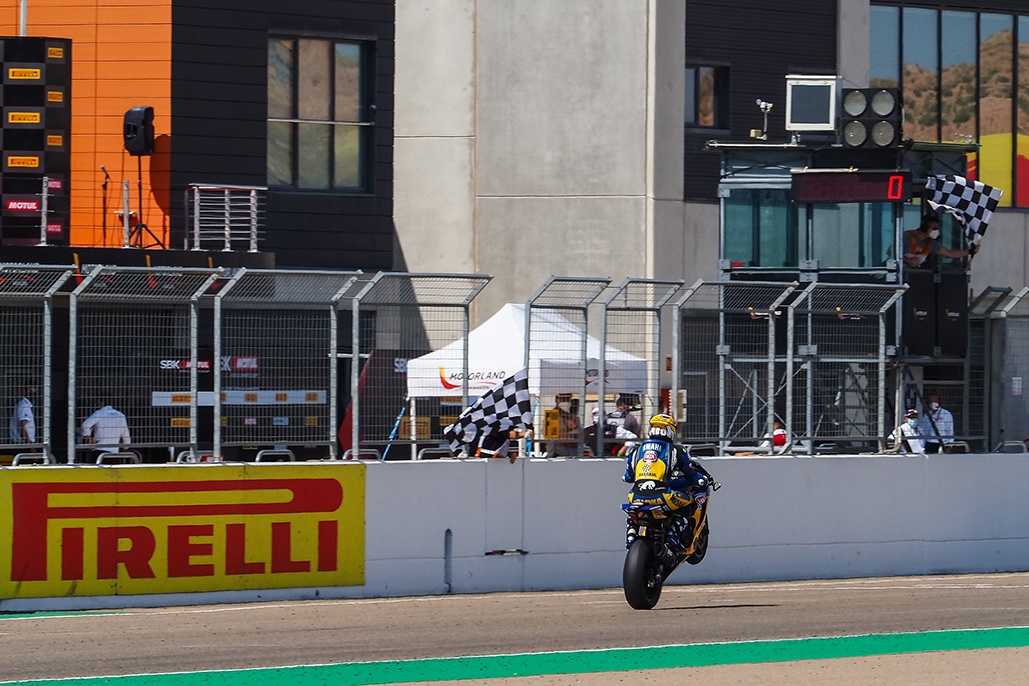 Race 2 for the FIM Supersport World Championship at MotorLand Aragon for the Pirelli Teruel Round was full of drama as Andrea Locatelli (BARDAHL Evan Bros. WorldSSP Team) claimed his ninth consecutive WorldSSP victory, extending his Championship lead to 79 points, as he won the 15-lap race by more than six seconds.

Locatelli had fallen to third place before responding on the second lap and was looking to battle his way through the front running pair of Jules Cluzel (GMT94 Yamaha) and Raffaele de Rosa (MV Agusta Reparto Corse). Cluzel was fighting with de Rosa, the Italian putting pressure on Cluzel from second place, before the pair collided at Turn 1 on Lap 4; forcing both riders out of the race. Cluzel was taken to the medical centre for a check-up following the incident and was diagnosed with fractures to his left tibia and fibula, with Cluzel transferred to a local hospital for further assessments.

It meant Locatelli assumed the lead of the race with 11 laps to go but took a handful of laps before he could pull out a gap from Lucas Mahias (Kawasaki Puccetti Racing) with Mahias not giving Locatelli any room to breathe until around the half distance point of the race. After that, Locatelli was able to pull out a gap to claim his ninth win of the season, the first rider to win nine races in one WorldSSP season. Mahias claimed a comfortable second place ahead of Isaac Viñales (Kallio Racing), who completed the podium, after an epic last-lap battle with Philipp Oettl (Kawasaki Puccetti Racing); the pair separated by just 0.032s at the line.

Hikari Okubo (Dynavolt Honda) did not take the start of the race while Luigi Montella (DK MOTORSPORT), Kevin Manfredi (Altogoo Racing Team) and Can Öncü (Turkish Racing Team) all retired from the race alongside Cluzel and de Rosa; with Öncü bringing his bike back to the pits after just five laps.

P1 Andrea Locatelli (BARDAHL Evan Bros. WorldSSP Team)
“It’s another fantastic day. We pushed until the end and tried to win; it was a fantastic weekend for us. I’m a little bit sorry for de Rosa and Cluzel. This is not good for the race. We are happy for our work and we will continue this way.”

P2 Lucas Mahias (Kawasaki Puccetti Racing)
“I’m really happy because I didn’t think it would be possible to get a podium at the start of the race, and my goal is fourth or fifth. I had the crash in front of me. I tried to follow Andrea and was able to keep the gap. I made a little bit of a mistake in the chicane and I lose some time. After that, I looked at the gap behind me and managed the bike because second place is important for Kawasaki and for the team.”

P3 Isaac Viñales (Kallio Racing)
“I’m really happy. After four laps, my tyres went down a lot and I was thinking I would finish in eighth or tenth. Finally, it was possible to stay in the second group and it was possible to fight for third position.”