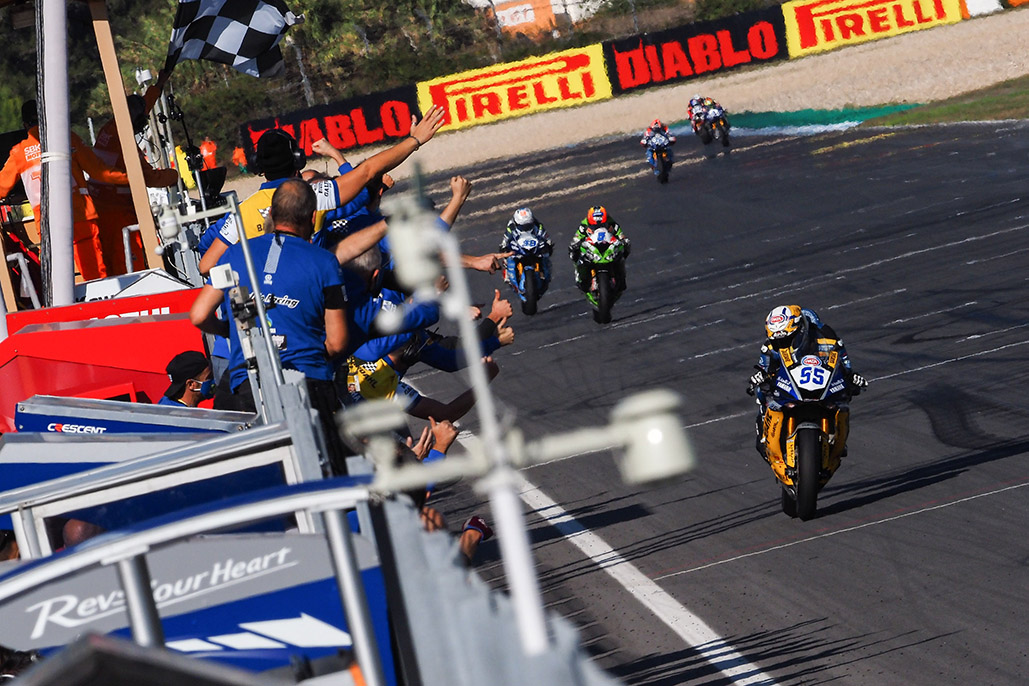 restart to take victory at Estoril.

There was plenty of action across Race 1 at the Pirelli Estoril Round for the FIM Supersport World Championship as Andrea Locatelli (BARADHAL Evan Bros. WorldSSP Team) claimed victory at the Circuito Estoril in a Red Flagged and restarted race in Portugal, with the second part of the race reduced to 12 laps.

The race was Red Flagged on Lap 3 when Peter Sebestyen (OXXO Yamaha Team Toth) crashed at Turn 13, the final corner at the Circuito Estoril, spraying gravel onto the track. The Red Flag was shown in order to give marshals a chance to clear the stones from the tarmac, with the new grid set by positions at the last timing point before the Red Flag was deployed.

The restarted race started dramatically when Raffaele De Rosa (MV Agusta Reparto Corse) and Lucas Mahias (Kawasaki Puccetti Racing) collided at Turn 2 on Lap 1; with de Rosa retiring from the race on the spot while Mahias was able to return to the pitlane with his Kawasaki machine. It meant Locatelli was able to move clear at the front of the field to take victory; his 12th of the season after 14 races in 2020.

Axel Bassani (Soradis Yamaha Motoxracing) finished in eighth place as the highest-placed WorldSSP Challenge rider as he looks to snatch the title away from Kevin Manfredi (Altogoo Racing Team); the Italian down in 14th place. Jules Cluzel’s (GMT94 Yamaha) return from injury culminated in points with ninth place, finishing ahead of teammate Corentin Perolari who completed the top ten.

Danny Webb (WRP Wepol Racing) battled from the back of the grid in the restarted race after crashing at Turn 3 in the first part to finish in 11th place, holding off Hikari Okubo (Dynavolt Honda) who came home in 12th. Federico Fuligni (MV Agusta Reparto Corse), Manfredi and Andy Verdoïa (bLU cRU WorldSSP by MS Racing) completed the points in Race 1; with Indonesian rider Galang Hendra Pratama (bLU cRU WorldSSP by MS Racing) just missing out on points with 16th place.

P1 Andrea Locatelli (BARDAHL Evan Bros. WorldSSP Team)
“Another victory! Today was not so easy and the conditions here were a little bit crazy with the wind. We are stronger when it is time to race, we are ready, and this is important. Now we are working a little bit for tomorrow, but I am confident I can make another victory and I will try for this.”

P2 Philipp Oettl (Kawasaki Puccetti Racing)
“I’m really happy about this result. It as a really up and down race. I tried to close the gap to Andrea, but it was not possible. The track conditions were quite slippery and the front was sliding away all the time and also the rear was difficult to control and I tried my best to stay on the bike and take as many points as possible and now I’m really happy. The team did an amazing job from yesterday to today. It was an amazing race.”

P3 Hannes Soomer (Kallio Racing)
“We had quite good speed, but I messed up the Superpole so had a really bad starting position. I had a good start and I could almost stay with Andrea. Unfortunately, there is the last sector where I am not so strong, but we will try to fix it for tomorrow and maybe we can fight for the victory.”