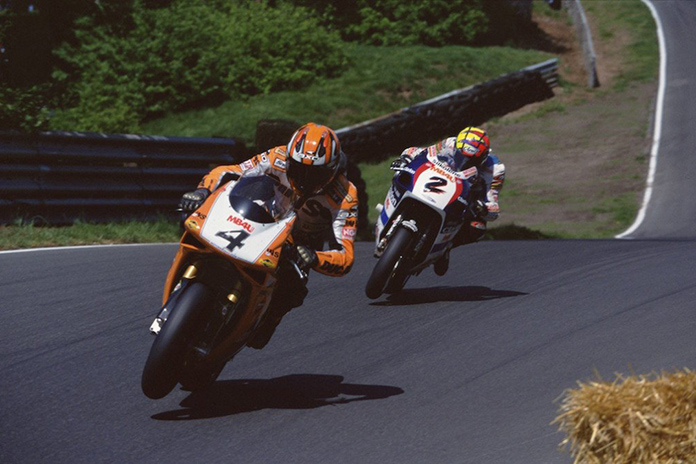 The 2016 Carole Nash MCN will play host to a special 20 year celebration of the MCE British Superbike Championship (BSB), with a collection of title winning machines on display and former champions going head-to-head in the live action ‘Slide’ show.

Since its introduction, the British Superbike Championship has grown to become the most competitive domestic motorcycle series in the world. Five of the most talented riders to grace the series – Neil Hodgson, Chris Walker, Niall Mackenzie, John Reynolds and Tommy Hill – will be donning their race leathers once again as they join Isle of Man TT legend John McGuinness in the fast-paced live action ‘Slide’ show, which is free to all ticket holders.

The five BSB stars will also be reunited with the machines that took them to glory. Included in the anniversary collection will be Mackenzie’s Cadbury Boost Yamaha; Hodgson’s title-winning GSE Ducati, alongside bitter title rival Walker’s Crescent Suzuki and Reynolds; 2004 Rizla Suzuki.

Stuart Higgs MCE British Superbike Series Director said: “What a great opportunity for fans to not only see some of the machines that make up the rich heritage of our series but also witness past champions going bar to bar!

‘With the events at Brands Hatch always attracting huge crowds, we know that London and the South East have a very strong British Superbike following.”

Rob Aherne Managing Director of Motorcycling at Bauer Media said: “This is a really exciting addition to the 2016 Carole Nash MCN London Motorcycle Show line up. The British Superbike Championship is one of the best series in the world and has produced some of the biggest stars in racing, so the big names going head-to-head in Slide is something not to be missed.”

Tickets are now on sale, with adult advanced tickets at £17 online, senior and student tickets £15 and one child going free per paying adult. Additional children’s tickets are just £10 while bike parking will again be free. All tickets will be subject to a one-off charge of £1.50 per transaction.