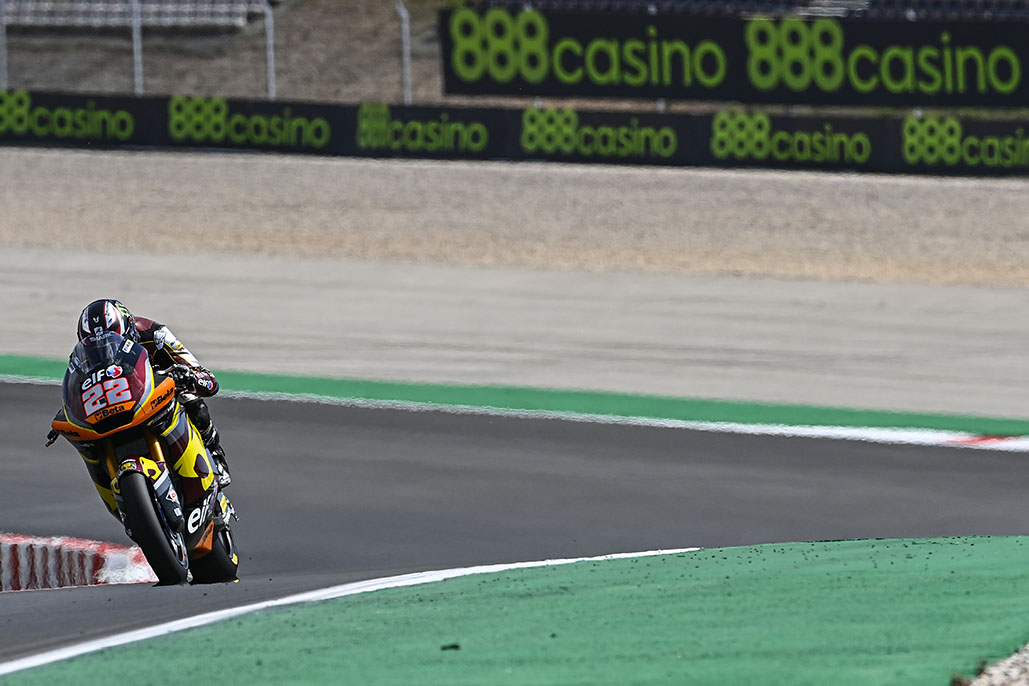 The Brit remains undefeated on Saturday. But will the same be true on Sunday? Gardner is homing in…

Sam Lowes (Elf Marc VDS Racing Team) has made it three from three in 2021 as the Championship leader took pole once more for the Grande Premio 888 de Portugal. It was close though, with Remy Gardner (Red Bull KTM Ajo) just 0.023 off as the 2020 winner at the track remains the man closest on the chase. Xavi Vierge (Petronas Sprinta Racing) went from Q1 to P3 as he completes the front row.

Lowes was the early leader in Q2 as the first laps of the second part of qualifying were fired in, but Gardner soon took after after setting a 1:43.032. However, the fight between Gardner and Lowes had already begun. The British rider was back on top by 0.114s after two flying laps, but the number 22 had a hairy moment heading into the tight Turn 5 left-hander on his third flyer. Responding, Gardner improved his lap time to lie just 0.006s behind Lowes.

Q1 graduate Vierge was in P3 already, having shown some impressive pace in the early stages of Q2, and the Spaniard was ahead of two rookies in the form of Ai Ogura (Idemitsu Honda Team Asia) and Albert Arenas. The reigning Moto3™ World Champion was shuffled down to P7 rather rapidly though as Marco Bezzecchi (Sky Racing Team VR46) and Augusto Fernandez (Elf Marc VDS Racing Team) moved to P5 and P6 respectively.

Another great lap from Lowes came in next and his advantage over Gardner grew to 0.023s – not a lot – but the Brit was then down at Turn 11, ending his session a little early. No one could better him regardless, although Gardner runs him closest in P2 once again and the top two in the title fight so far line up side by side. Vierge joins them on the front row.

Ogura takes fourth and that’s the Japanese rookie’s best Moto2™ qualifying performance, just 0.220s down on Lowes and showing his Doha GP speed was no flash in the pan. Bezzecchi and Augusto Fernandez join Ogura on Row 2, which is Augusto Fernandez’s best Saturday result of the year. Arenas is another rookie to bag his best Moto2™ qualifying in P7, the Spaniard beating one of the pre-qualifying favourites in Joe Roberts (Italtrans Racing Team) by just 0.010s. The American is P8 on the grid, just ahead of Aron Canet (Solunion Aspar Team) and a seemingly disappointed 10th fastest Raul Fernandez (Red Bull KTM Ajo). The rookie sensation, who won in Moto3™ at the track last year in some style, will be hoping to shoot through to the podium fight on Sunday.

It’s three from three for Lowes on a Saturday this year, but will it be a hat-trick of wins on Sunday? And a Lowes vs Gardner shootout for victory again? Find out when the Moto2™ riders go racing in Portimão at 14:30 local time (GMT+1) on Sunday afternoon.

Sam Lowes: “It was a bit different from this morning, yesterday I think the grip was down in general, the laptimes were not so fast. Today was more similar to last year, laptimes were similar. This afternoon maybe a bit of temperature and a bit of wind and the laptimes were a bit slower but I felt good. We improved the bike a lo over the weekend. It was the first time with a new tyre and low fuel in qualifying, the bike was feeling good and we could make a good rhythm. I’m happy with the work we’ve done and I’m looking forward to the race.”