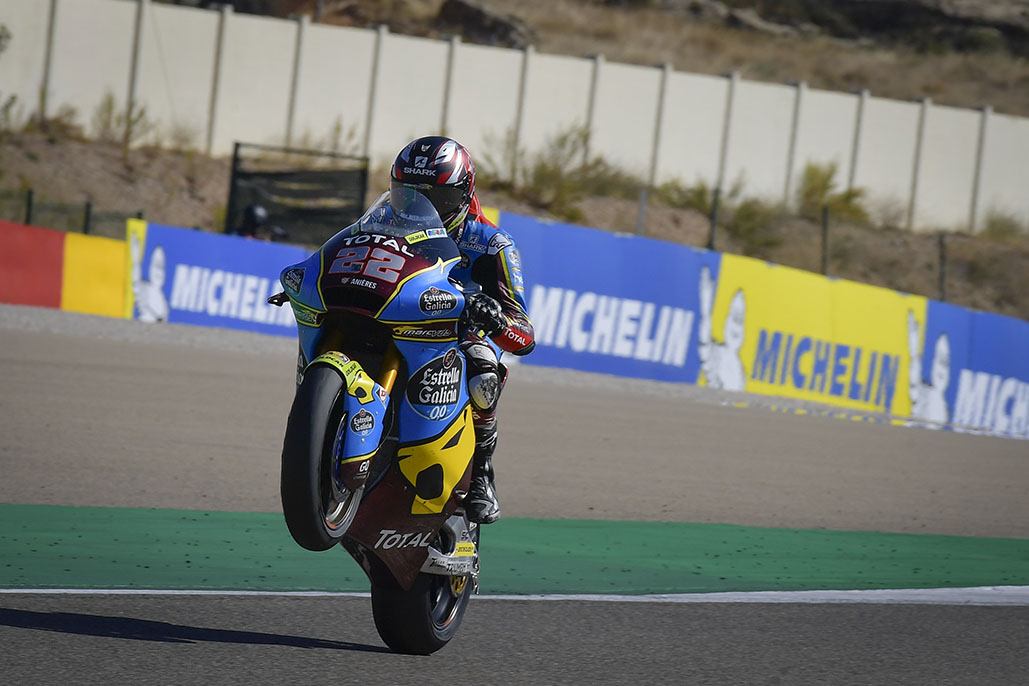 The Brit comes out on top in a race of attrition ahead of Bastianini, with Marini and Bezzecchi both crashing out to add another twist to the Moto2™ tale

A seismic shift in the fight to be crowned 2020 Moto2™ World Champion took place at the Gran Premio Michelin® Aragon Grand Prix, with Sam Lowes (EG 0,0 Marc VDS) and Enea Bastianini (Italtrans Racing Team) taking first and second – and Sky Racing Team VR46 teammates Luca Marini and Marco Bezzecchi both crashing out. That leaves Bastianini, who just beat Jorge Martin (Red Bull KTM Ajo) to second on the last lap, take over in the Championship lead, with Lowes’ 25 points for the win putting him just two off the top in the standings…

As the lights went out in Aragon, it was a super start from Bezzecchi as he took the holeshot from second on the grid, with Petronas Sprinta Racing’s Jake Dixon swooping through to third from row two. Early drama then struck as Jorge Navarro (MB Conveyors Speed Up) crashed at the opening corner following contact with Marcos Ramirez (Tennor American Racing), but the Spaniard thankfully walked away from a scary crash.

Then, polesitter Lowes ran slightly wide at Turn 12 from second and that allowed Fabio Di Giannantonio (MB Conveyors Speed Up) through after the Italian had sliced past Dixon, but Lowes hit back quick to set his sights Bezzecchi out front. Not long after that on Lap 3, the Championship then took its biggest twist yet as former points leader Luca Marini tucked the front through Turn 14 and slid out – leaving an open goal for those in the hunt to capitalise.

Teammate Bezzecchi would be the new man ahead in the standings if he could hold on to victory, but Lowes and Di Giannantonio were close. ‘Diggia’ made his move on Lowes with fourteen to go at MotorLand, but the three stayed close as Enea Bastianini edged ahead of Jake Dixon for the final place inside the top five just behind them.

Ten laps in, Di Giannantonio pounced on Bezzecchi for the lead at Turn 14. The pair were side-by-side down the long back straight but the Speed Up man was able to hold on as they went through the final corner. But then suddenly, into Turn 2 next time around, ‘Diggia’ was sliding out of the lead – leaving Bezzecchi and Lowes in a duel for the win.

By then, Martin was beginning to loom ominously in the background though, and Bastianini was just half a second off his rear wheel. With seven to go, the ‘Beast’ struck under the shadow of the MotorLand wall.

Martin wasn’t going to just sit and let Bastianini escape though, with the Red Bull KTM Ajo man immediately finding a response, but the number 33 had an answer too – back past on the brakes into Turn 8.

With five to go Bezzzecchi was still in control, half a second clear of Lowes. Three seconds further back Bastianini held third place, himself three tenths clear of Martin. The laps ticked by and the end drew nearer with Bezzecchi on course for victory, before another monumental moment in the World Championship chase suddenly took place. With just two laps remaining, Bezzecchi suddenly crashed out at Turn 2.

Lowes swooped through, and incredibly took the mantle as Championship leader too as Martin got himself in front of Bastianini. But onto the final lap, it was far from decided. Lowes crossed the line to take his first ever back to back wins, but the fight for second was close. It came down to the final sector on the final lap, with Bastianini putting in a clinical, ruthless and vital move to secure the extra four points to sit atop the Moto2™ standings.

Further back, Dixon well and truly bounced back from his Le Mans heartbreak by clinching a career-best finish in fourth. ONEXOX TKKR SAG Team’s Remy Gardner got the better of Ramirez and Hector Garzo (FlexBox HP 40) in the fight for the final place inside the top five. Tennor American Racing’s Joe Roberts took eighth, before Tetsuta Nagashima (Red Bull KTM Ajo) and Simone Corsi (MV Agusta Forward Racing) rounded out the top ten.

That’s it from MotorLand… for this weekend at least! Moto2™ are back on track for the Gran Premio Liqui Moly de Teruel on Friday – and it couldn’t be closer. Will it change everything again? Or can Lowes and Bastianini keep the momentum rolling? We’ll find out soon enough!

Sam Lowes: “Bezzecchi’s crash was a shame near the end of the race, Diggia I felt like I had his pace… I’m sorry for them, they were stronger than me at a couple of points on the track which is something I can work on for next weekend. But overall I was there, I kept the pressure on, was able to benefit from their mistakes and back to back wins is good for me! It’s the first time for me to get back to back wins in Moto2, so I’m really really happy.”