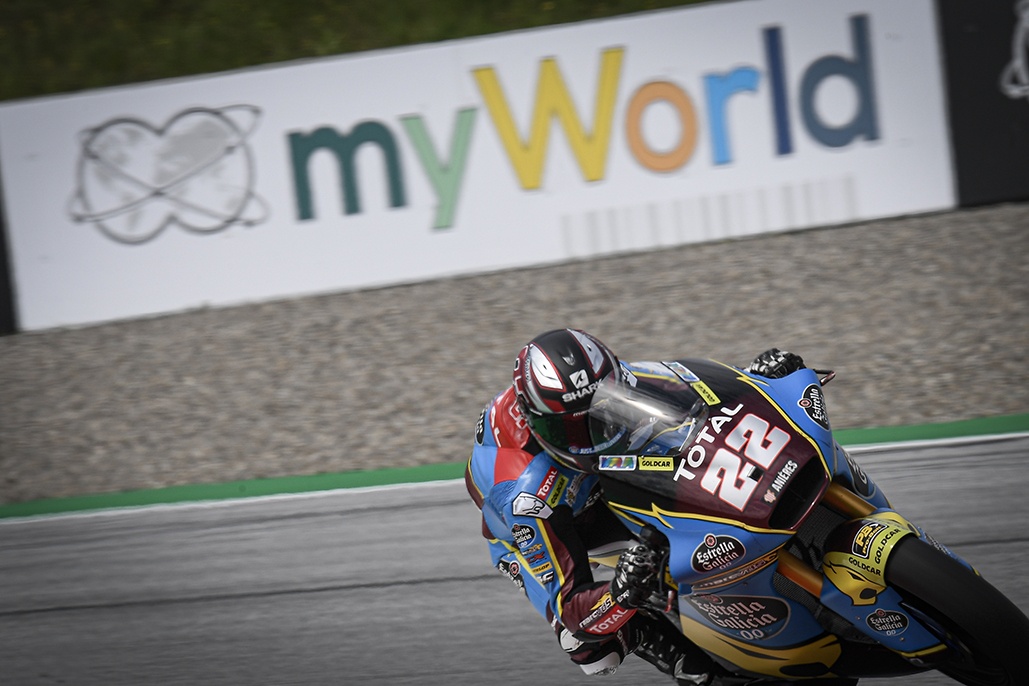 The Brit and the Spaniard duel it out in the last few minutes of FP2, with Bezzecchi third overall.

Sam Lowes (EG 0,0 Marc VDS) ended Friday at the myWorld Motorrad Grand Prix von Österreich as the fastest man in Moto2™, but the Brit had to work for it as he duelled Jorge Martin (Red Bull KTM Ajo) for the honour late in an FP2 characterised by improving conditions. In the end it’s just 0.010 that separates the two, with Marco Bezzecchi (Sky Racing Team VR46) another tenth and a half back in P3 overall.

FP1
It was Lowes who took the first spoils of the weekend, the Brit ending FP1 at the top – but even then, it was by only 0.016. Bezzecchi was the man just behind him in the morning after a late lunge up the timesheets, with Augusto Fernandez (EG 0,0 Marc VDS) completing a top three split by just 0.044.

Marcos Ramirez (Tennor American Racing) had a technical problem in the session, and the sole faller was Lorenzo Dalla Porta (Italtrans Racing Team).


FP2
After a sunny morning, it looked like the rain could ruin everyone’s chances of improving but that didn’t quite hold true for Moto2™. After the MotoGP™ field did a solid job of drying up the track just before, the conditions were good enough for riders to really push towards the end, with Lowes going even faster than his own benchmark from the morning. Martin made him work for it though and lost out by an infinitesimal few thousandths as the two traded fast laps at the end.

Jake Dixon (Petronas Sprinta Racing) was third in FP2 as the Brit impressed to end the session just two tenths off his compatriot Lowes, with Augusto Fernandez taking fourth and up at the sharp end once again. Brno podium finisher Joe Roberts (Tennor American Racing) completed the top five with a lap that proves valuable on the combined timesheets as he’d finished FP1 outside the top 14 – and therefore outside the Q2 graduation zone.

After a day of changeable weather then, it’s Lowes in the driving seat on the combined timesheets ahead of Martin, both with laps from FP2. Bezzecchi takes third ahead of Fernandez, their laps set in the morning, with Jake Dixon’s afternoon heroics meaning the Brit completes the top five overall on Friday. Navarro, Gardner, Canet and Nagashima slot in from sixth to ninth courtesy of their FP1 laptimes, with Roberts’ FP2 best meaning he completes the top ten overall on Day1.

Baldassarri, Marini, Xavi Vierge (Petronas Sprinta Racing) and Stefano Manzi (MV Agusta Forward Racing) are the final four heading straight through to Q2 as it stands, and that leaves one unexpected name out of the graduation zone: Andalucia and Brno winner Enea Bastianini (Italtrans Racing Team), who was P16 overall…

Can the ‘Beast’ bounce back on Saturday? And will the weather afford him the chance? FP3 is the last opportunity for the field to get an automatic place in Q2, before qualifying from 15:10 (GMT +2).