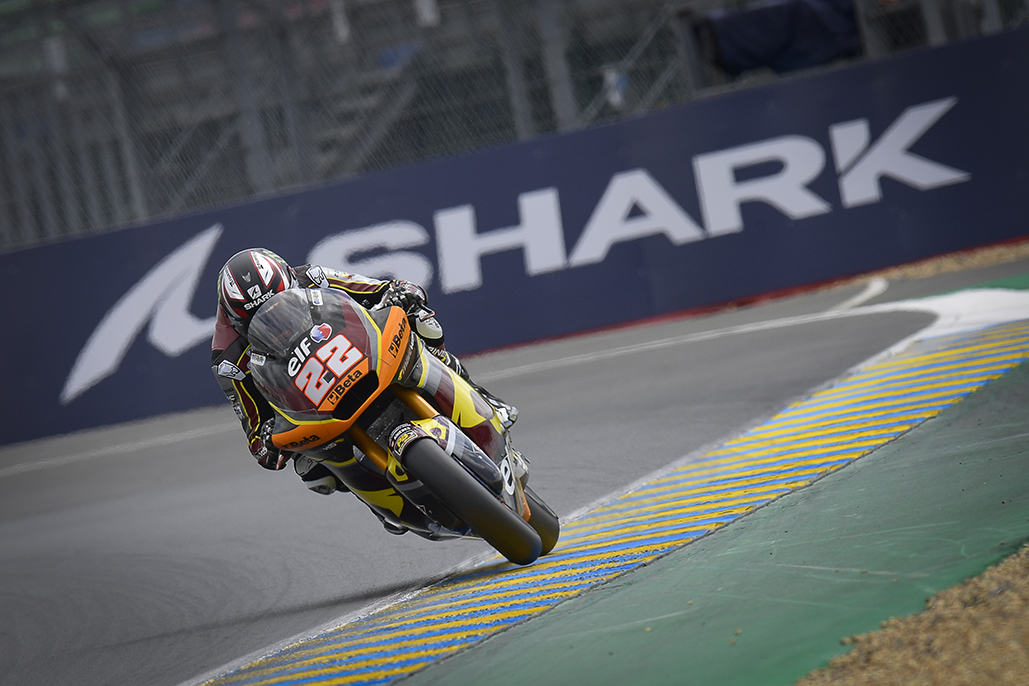 The Brit tops Day 1 from the rookie, with Augusto Fernandez completing the top three after more top form in France

Sam Lowes (Elf Marc VDS Racing Team) is once again the man to beat on the Moto2™ timesheets, but once again it wasn’t by much. On Day 1 of the SHARK Grand Prix de France the Brit led the way by just 0.075 ahead of rookie sensation Raul Fernandez (Red Bull KTM Ajo), with Augusto Fernandez (Elf Marc VDS Racing Team) completing the top three after winning a tight squabble for third.

MotoGP™ almost managed it in FP1, but Moto2™ were very much back on slicks by the conclusion of their first session of the weekend and the laptimes picked up some speed. Aron Canet (Inde Aspar Team) was top of the pile from Stefano Manzi (Flexbox HP 40), with Lowes fast in third but just 0.035 in further arrears.

Bezzecchi crashed, rider ok, but Yari Montella’s (MB Conveyors Speed Up) weekend came to an early end as the Italian broke his right wrist in his tumble. Alonso Lopez has been drafted in on replacement duty, the Spaniard fresh from three Moto2™ European Championship podiums to start his rookie season on the Boscocuro chassis. How will the Moto3™ podium finisher adapt to Moto2™ competition with Triumph?

Meanwhile, later in the day and despite the threatening cloud cover, FP2 stayed dry and Lowes took to the top, only a tenth and a half off outright the lap record. Raul Fernandez was less than a tenth off and Augusto Fernandez got promoted to third as Bezzecchi had his best effort scrubbed off, with Championship leader Remy Gardner (Red Bull KTM Ajo) within half a tenth of the top three.

Fifth went to Nicolo Bulega (Federal Oil Gresini Moto2) as the Italian put some more Friday speed on show, with Xavi Vierge (Petronas Sprinta Racing) pipping Canet to sixth. Jerez winner Fabio Di Giannantonio (Federal Oil Gresini Moto2) took P8 despite a tumble, and the Italian was one of 11 crashers including the likes of Joe Roberts (Italtrans Racing Team) and Jake Dixon (Petronas Sprinta Racing), who both suffered rough days at the office down in P28 and P25 respectively. All riders were ok in FP2, although Hector Garzo (Flexbox HP 40) must also be reviewed before FP3.

After getting his best scrubbed for Yellow Flags, Bezzecchi’s next lap puts him in ninth, ahead of Bo Bendsneyder (Pertamina Mandalika SAG Team) completing the top ten. Marcel Schrötter (Liqui Moly Intact GP), Manzi, Jorge Navarro (MB Conveyors Speed Up) and Garzo currently stand to move through to Q2 if no one can improve on Saturday… and rain is a distinct possibility!

Will the weather halt improvers in FP3 or will there be another mad dash to the line? Find out at 10:55 (GMT +2), before qualifying for the intermediate class from 15:10.