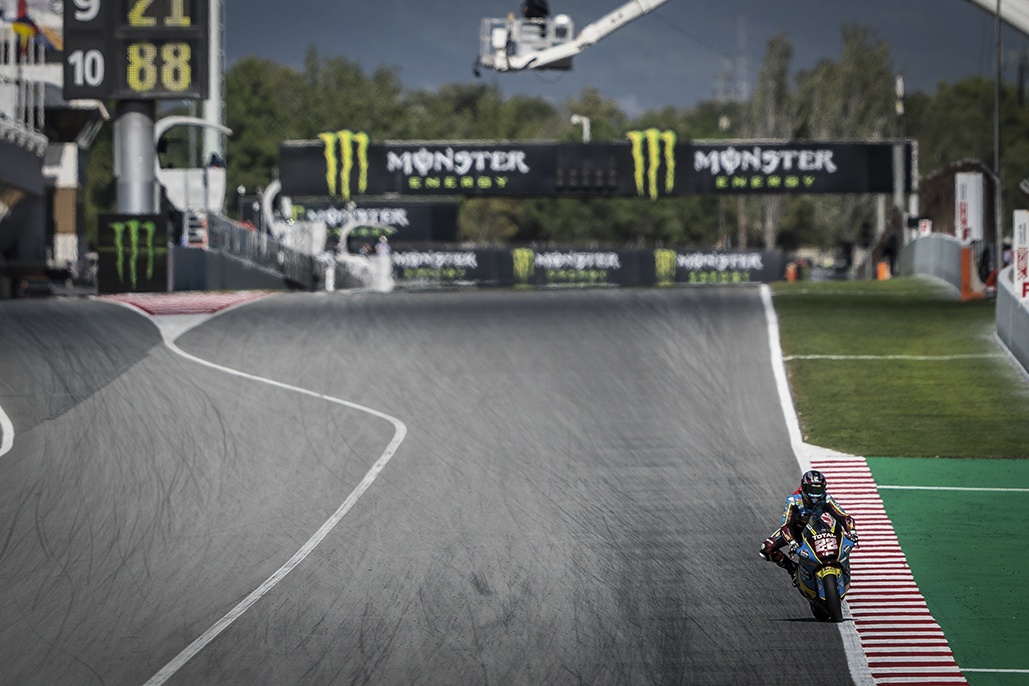 The Brit edges ahead of the Championship leader, with Schrötter completing the fastest trio on Friday.

Sam Lowes (EG 0,0 Marc VDS) was back on top on Friday at the Gran Premi Monster Energy de Catalunya, the Brit ahead of closest challenger Luca Marini (Sky Racing Team VR46) by two tenths by the end of play. Completing the top three was Marcel Schrötter (Liqui Moly Intact GP) as the German once again showed some solid speed, fastest in the afternoon.

FP1
Lowes kicked off the weekend fastest with a 1:44.122 to lead Championship leader Marini from the off, the two split by exactly two tenths in FP1. Tetsuta Nagashima (Red Bull KTM Ajo) took third as he found some solid form, but the Japanese rider was over half a second off Lowes’ lap. Speed Up machinery made a resurgence in fourth and fifth, meanwhile, with impressive rookie Aron Canet (Inde Aspar Team Moto2) getting the better of Fabio Di Giannantonio (HDR Heidrun Speed Up) as the two completed the top five.

The top 14 were within a second in FP1 and with Lowes half a second faster than Nagashima, that meant it was just half a second covering P3 to P14!

FP2
The afternoon saw Schrötter take to the top, with the German 0.066 ahead of Di Giannantonio in the session. Home hero Xavi Vierge (Petronas Sprinta Racing) slotted into third, ahead of Marco Bezzecchi (Sky Racing Team VR46) and second in the Championship, Enea Bastianini (Italtrans Racing Team), as the latter made a leap up the timesheets in the session at least, from P13 in FP1.

Jake Dixon (Petronas Sprinta Racing) crashed at Turn 2, before Remy Gardner (ONEXOX TKKR SAG Team) did the same shortly after, riders ok. Gardner has been given a six-place grid penalty for the incident after crashing whilst not respecting a Yellow Flag.

Overall then, it’s Lowes and Marini who lead the way thanks to their fastest times in FP1, ahead of Schrötter by virtue of his fastest lap in the afternoon. Di Giannantonio was consistently quick in both sessions but his FP2 best puts him in fourth, with Nagashima completing the fastest five on Friday by virtue of his FP1 lap.

Rookie Canet ends the day in sixth ahead of Marco Bezzecchi, both also courtesy of their FP1 laps, ahead of Xavi Vierge in eighth.

Next up was the returning Jorge Martin (Red Bull KTM Ajo) as the Spaniard’s FP1 best put him P7 in that session and P9 overall, a solid day’s work as he gets back on track after missing two races.

Augusto Fernandez (EG 0,0 Marc VDS) completed the top ten on Day 1, but by an infinitesimal 0.002 – with Bo Bendsneyder (NTS RW Racing GP) missing out by the equally tiny margin of 0.005!

That leaves Bastianini down in P12 overall – one better than FP1 – and the ‘Beast’ will be one of many looking for more on Saturday morning as he attempts to hunt down Marini’s five-point title lead. Find out how FP3 shuffles the entrants to Q2 at 10:55 (GMT +2), before qualifying for Moto2™ begins at 15:10.