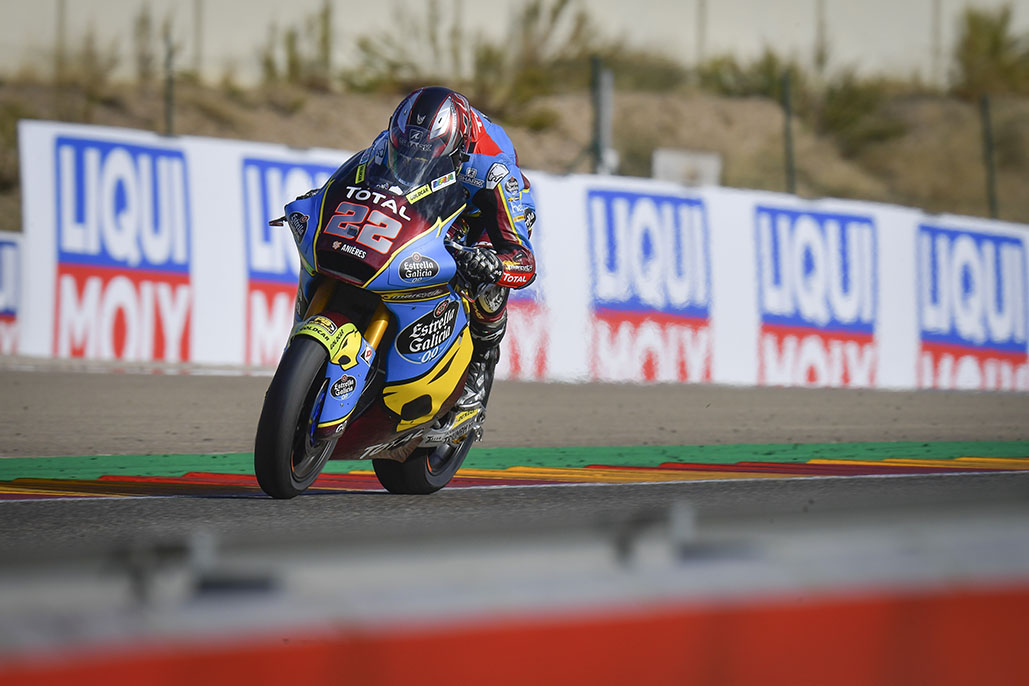 The Aragon GP winner picks up where he left off, ahead of Navarro and Garzo on Friday

Sam Lowes (EG 0,0 Marc VDS) continued his familiarity with the top of the timesheets at MotorLand on Friday in the Gran Premio Liqui Moly de Teruel, the Brit ending the day fastest overall. Jorge Navarro (Lightech Speed Up) ran him close, however, just half a tenth off to bounce back from a crash in FP1. Hector Garzo (Flexbox HP 40) ended the day in an impressive P3, 0.260 off the top.

FP1
Augusto Fernandez (EG 0,0 Marc VDS) struck late in FP1 to top the first session of the weekend, denying Aragon GP winner and teammate Sam Lowes with a late 1:52.623 to pull 0.134 clear of the Brit. Fabio Di Giannantonio (Lightech Speed Up) kept his pace rolling from last weekend to complete the top three, another two tenths down, and showing Speed Up’s pace at the venue once again.

The morning began with a few familiar names from the Aragon GP fighting it out for first as Lowes, Di Giannantonio and Marco Bezzecchi (Sky Racing Team VR46) proved the fastest out the blocks, with Luca Marini (Sky Racing Team VR46) also very much in touch. The two Sky Racing Team VR46 riders were leapfrogged by the flag, however, with Jake Dixon (Petronas Sprinta Racing), Joe Roberts (Tennor American Racing) and Lorenzo Baldassarri (Flexbox HP 40) all leaping up the timesheets later in the session. They locked out fourth to sixth in that order, leaving Bezzecchi down in seventh.

Navarro was eighth in FP1 and just lost out to Bezzecchi by 0.010, the Spaniard also recovering from an early crash to bounce back. Navarro in turn got the better of ninth-placed Remy Gardner (ONEXOX TKKR SAG Team) by an equally tiny gap of 0.014 as it closed up throughout the tight top ten.

FP2
Almost immediately in FP2, Lowes went six tenths quicker than his teammate in FP1 and on his next lap, the Brit was faster again. Lowes was lightning out the box but so was Edgar Pons (Federal Oil Gresini Moto2) as he found time too.

After a good start to the session though, Pons crashed at Turn 8 and subsequently, his Kalex-Triumph slid through the gravel, down the hill and back onto the track at the Turn 9 apex. The session was briefly red-flagged with just under 25 minutes to go to clear the gravel.

Once underway again, Bezzecchi became the next to crash, the Italian at Turn 3 – rider ok. Lowes sat 0.2 clear of Garzo and Jake Dixon inside the top three at that point, but the number 22 would be next to take a tumble. Almost identical to Pons’ incident, gravel once again brought out the Red Flags.

Once back underway for the second time, with nine minutes left on the clock, Navarro was able to cut Lowes’ advantage down to less than a tenth. There were a few more improvers late on near the top too, so it’s Lowes leading Navarro ahead of Garzo, with Di Giannantonio and Joe Roberts rounding out the top five – the American just 0.001 off ‘Diggia’.

Jorge Martin put in a late lunge back towards the front as the Aragon GP winner took sixth, 0.415 back. Dixon drops to P7 overall, with Gardner, Nicolo Bulega (Federal Oil Gresini Moto2) and Pons rounding out the top 10.

Bezzecchi was forced to settle for 11th on Day 1, ahead of Fernandez as the Spaniard took P12 by virtue of his FP1 time. Hafizh Syahrin (Inde Aspar Team) was next up, with Championship leader Bastianini rounding out the fastest 14 and currently the last rider set to move through to Q2…