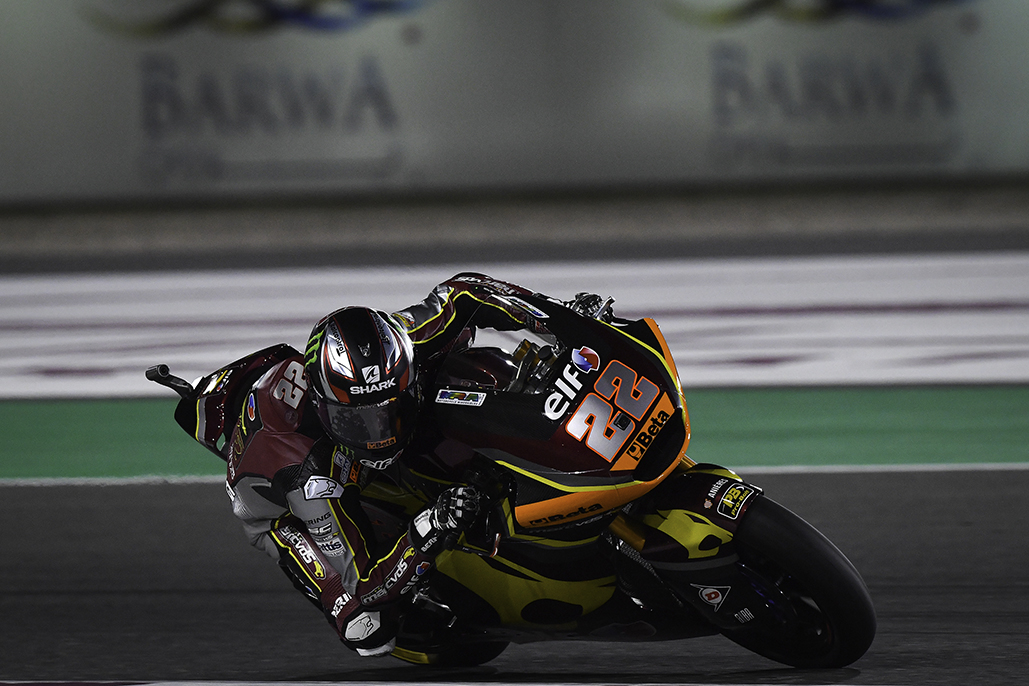 Ahead of the opening Moto2™ pole position battle, four riders entered the fray from Q1. Fabio Di Giannantonio (Federal Oil Gresini Moto2) was the quickest as rookie Celestino Vietti (Sky Racing Team VR46), Somkiat Chantra (Idemitsu Honda Team Asia) and 2019 Moto3™ World Champion Lorenzo Dalla Porta (Italtrans Racing Team) finished within a tenth of each other to get another crack at the whip in Q2.

As Q2 kicked into life, the fastest rider after the opening flying laps was Lowes. Jake Dixon (Petronas Sprinta Racing) made it a British 1-2 but working in tandem, Red Bull KTM Ajo’s Raul Fernandez and Remy Gardner then took over at the top – the latter leading his rookie teammate with a 1:59.245. Incidentally, Lowes’ first lap time was then scrapped but soon after, his second lap then saw him fly to P1, 0.447s faster than Gardner’s best.

Once again, Dixon made it a British 1-2 but Lowes’ lead was still considerable. Bendsneyder then catapulted himself to P2 before Lowes once again pulled clear of the chasing pack. Marco Bezzecchi (Sky Racing Team VR46) then took over in second, but the Italian was still over three tenths behind. The Red Bull KTM Ajo duo then launched themselves onto the front row, Raul Fernandez P2 and Gardner P3, but the Aussie’s lap would get cancelled.

The ever-impressive Bendsneyder then hit back to demote Bezzecchi off the front row on his final lap as Gardner then threatened Lowes’ time on his last lap. However, a crash for Xavi Vierge (Petronas Sprinta Racing) at Turn 10 – minutes after the Spaniard and teammate Dixon collided at Turn 3 – put a halt to Gardner’s late charge. Dixon was judged to have been riding slow on the line, causing a collision and has a three-place grid penalty.

At the top though, Lowes was untouchable. The 2020 title challenger has been in supreme form at Losail and will launch from pole, and he’ll line up alongside a rookie sensation in Raul Fernandez. The Spaniard has taken to Moto2™ like a duck to water and Bendsneyder impressed too, picking up his first front row start since the 2017 Moto3™ Dutch GP.

A star-studded second row will be lining up for the opening round of the season as Bezzecchi, Joe Roberts (American Racing) and Gardner claim P4, P5 and P6 in Q2 respectively. Dixon couldn’t improve on his couple of early banker laps and slipped down to P7, but will start further back in tenth. Q1 graduate Di Giannantonio was P8 but will start seventh ahead of Jorge Navarro (MB Conveyors Speed Up), with rookie Vietti boosted up to ninth after an impressive day.

Marcos Ramirez (American Racing) and Simone Corsi (MV Agusta Forward Racing) both went to the medical centre for check-ups after both suffering big crashes in Q1. Unfortunately, both riders have been declared unfit. Corsi sustained a left wrist fracture and Ramirez suffered a right humeral fracture, the duo will miss the Qatar GP.

Can anyone beat Lowes at Losail? It’s looking like a tricky task, but Sunday is surely going to throw up some drama under the lights. Make sure you check the clock changes before tuning in for the Moto2™ race at 18:20 local time (GMT+3)!

Sam Lowes: “I felt good in qualifying, it was the first time we went out with low fuel, I did a quite a lot of fast laps, not a perfect lap but I’m happy. We’ve done a good job all winter and good job in the test, it’s been nice to do testing cause last year I missed it! It’s nice to understand more and give ourselves more possibilities in the race weekend if we need to, it’s going good. When you have a good year it’s nice to carry it on next year and carry the momentum.”