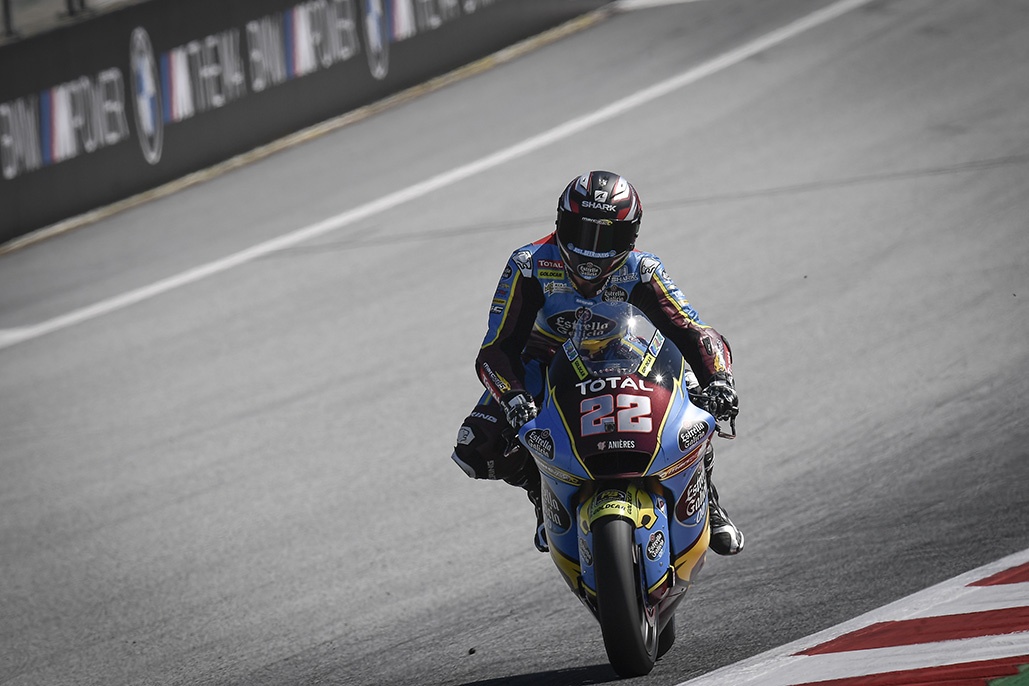 The top four end Friday within 0.081, with the Briton coming out on top after another show of pace.

Sam Lowes (EG 0,0 Marc VDS) has repeated his Friday heroics on take two as the Briton topped the combined timesheets on Day 1 of the BMW M Grand Prix of Styria. It was far from lonely at the top though, with Austrian GP polesitter Remy Gardner (ONEXOX TKKR SAG Team) just 0.016 down and most recent race winner Jorge Martin (Red Bull KTM Ajo) completing the top three… still within 0.060. As ever, the intermediate class is close!

FP1
Lowes topped the sunny FP1 session despite some late threats from those just behind him, the Brit putting in a 1:28.733 to get the better of the competition. Gardner and Martin took second and third with those tiny gaps to the top, and fourth? Fourth was still within a tenth of Lowes’ best, with Nicolo Bulega (Federal Oil Gresini Moto2) 0.081 down. Championship leader Luca Marini (Sky Racing Team VR46) was fifth, just over a tenth in arrears.

There were two incidents in the session, one a Turn 1 crash for Jake Dixon (Petronas Sprinta Racing), rider ok, and the other a run off for Marcel Schrötter (Liqui Moly Intact GP). Schrötter headed through the gravel but kept it upright and rejoined.

FP2
The weather remained sunny in FP2 but no one could quite get in the ballpark of the morning’s best laptimes. Marco Bezzecchi (Sky Racing Team VR46) topped the session in the 1:29s, with Gardner again close – this time just 0.042 off – and Jorge Navarro (+Ego Speed Up) third, two tenths off Bezzecchi. Somkiat Chantra (Idemitsu Honda Team Asia) and Hector Garzo (Flexbox HP 40) both put in top sessions in the afternoon to end FP2 in P4 and P5 respectively.

Impressive rookie Aron Canet (Openbank Aspar Team) had a blip in FP2 and was the sole crasher in the afternoon after he went down at Turn 1 – rider ok.

Looking through the fastest 14, most of the riders heading through – provisionally – to Q2 after Friday set their best in FP1, with Lowes, Gardner, Martin, Bulega and Marini the top five. Sixth went the way of Augusto Fernandez (EG 0,0 Marc VDS) as his improved form of late continues, with Bezzecchi in seventh overall.

Despite his crash, Canet’s FP1 time is enough to put the rookie in eighth, the Speed Up rider the only non-Kalex in the top ten, with former points leader Enea Bastianini (Italtrans Racing Team) slotting into ninth. Austrian GP podium finisher Schrötter completes that top ten despite his morning run off.

Currently, the final four set to move through are Marcos Ramirez (Tennor American Racing) – who had one of his best Fridays in some time – Navarro courtesy of his FP2 time, Tom Lüthi (Liqui Moly Intact GP), and Garzo… leaving the likes of Brno podium finisher Joe Roberts (Tennor American Racing) outside the graduation zone in P17, and Qatar GP winner Tetsuta Nagashima (Red Bull KTM Ajo) in P20.

Can they make it through when the field head out for FP3? That’s their final chance to move straight through to Q2, and it begins at 10:55 on Saturday morning. Qualifying then starts at 15:10.