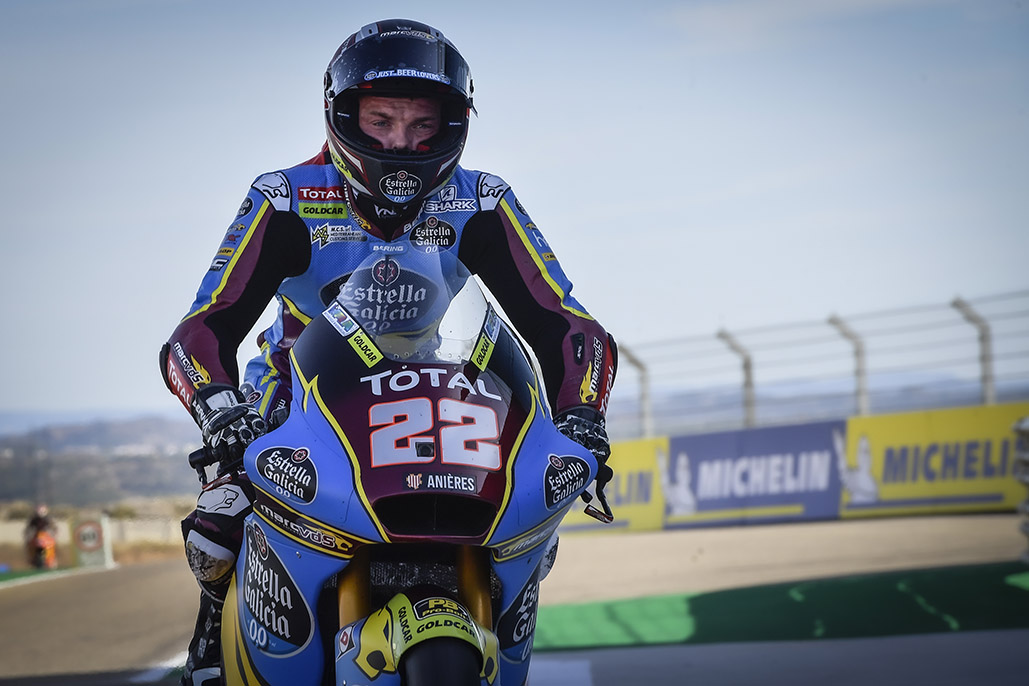 The Brit heads Bezzecchi and Di Giannantonio, with Marini seventh and Bastianini down in 12th.

In Q1 it was Red Bull KTM Ajo’s Jorge Martin and Tetsuta Nagashima heading through on top, joined by Simone Corsi (MV Agusta Forward Racing) and Tom Lüthi (Liqui Moly Intact GP) as the four got ready to fight it out again for the top 18 positions on the grid, leaving behind a few surprises such as Marcel Schrötter (Liqui Moly Intact GP) and Xavi Vierge (Petronas Sprinta Racing). But the clock was reset, and it was go-time for Q2.

It was Di Giannantonio who came out the blocks fastest in the second part of qualifying. A 1:52.364 was a decent banker lap time but it was soon beaten by Championship leader Marini, with rookie Marcos Ramirez (Tennor American Racing) then taking over at the top as he sat just behind Marini on track. Fortunes then favoured Jake Dixon (Petronas Sprinta Racing) as the British rider became the first ever Moto2™ rider to set a sub-1:52 at MotorLand Aragon, although the stunning lap was soon bettered by Diggia as the Italian took back to the top.

Out of nowhere, Bezzecchi then produced a sterling final sector to take provisional pole, making it an Italian 1-2 at the summit and Lowes lurking down in P10 with just three minutes to go. The number 22 was soon #OnIt though and at the third checkpoint, the Brit was a whopping four tenths quicker than Bezzecchi. Surely pole position was his with just the back straight and final two corners to navigate? Lowes flew across the line to do exactly that, but he did lose three tenths in the last split. Not that it matters though, the number 22 snatching P1 by 0.148.

No one else could challenge in the closing stages so Lowes will start from his first pole position since the 2016 Aragon GP – a race he went on to win. Bezzecchi will also be looking to close down the points gap from second, with Diggia completing the front row – his first since the 2019 San Marino GP. Dixon’s 1:51.999 was a firecracker of a time and yet, he’s not on the front row. Nevertheless, it’s a Moto2™ best qualifying for the sophomore who continues to show fine form. Lining up next to Dixon in P5 is another rider who claimed a career-best Moto2™ qualifying result – Ramirez. The Spaniard has been on form all weekend and will be hoping – at least – a top 10 challenge is on the cards.

Jorge Navarro (MB Conveyors Speed Up) was also under the former lap record, but has to settle for P6. Spearheading Row 3 is Marini who gets bumped back after Lowes’ late lap, far from a disaster for the Italian but it looks like he has plenty of work on his hands to try and stop Lowes or Bezzecchi closing his Championship gap further. Q1 graduate Jorge Martin salvages a P8 starting slot after finishing Free Practice in P19, the Spaniard ahead of compatriot Augusto Fernandez (EG 0,0 Marc VDS) and Remy Gardner (Onexox TKKR SAG Team) as the duo round out the top 10. Enea Bastiaini (Italtrans Racing Team) – the man second in the Championship – starts from his second-worst qualifying place of the season in P12, just behind 11th place Joe Roberts (Tennor American Racing).

Lowes is riding the crest of a wave on a circuit he loves. Will it be a second consecutive victory of the season, or can Bezzecchi beat his title rival? Di Giannantonio will be confident of a victory challenge too and whichever way you look at it, the Moto2™ Aragon GP looks set to be a barnstormer. Tune in to watch it at 13:20 (GMT+2)!

Sam Lowes: “This morning, well.. when you crash but you understand the mistake or the problem it’s ok, and we understand what happened this morning and it was probably good for me to show me where the limit was! I’m happy and I’ve got really good pace, and on used tyres as well I feel fast, so I feel good. It’s nice to come from winning last weekend to back it up with a pole position, it’s confidence building for me and thanks to the team, the bike has worked great since FP1. I’m looking forward to tomorrow. When everything’s going in a good way it’s a nice feeling so we need to make the most of it.”