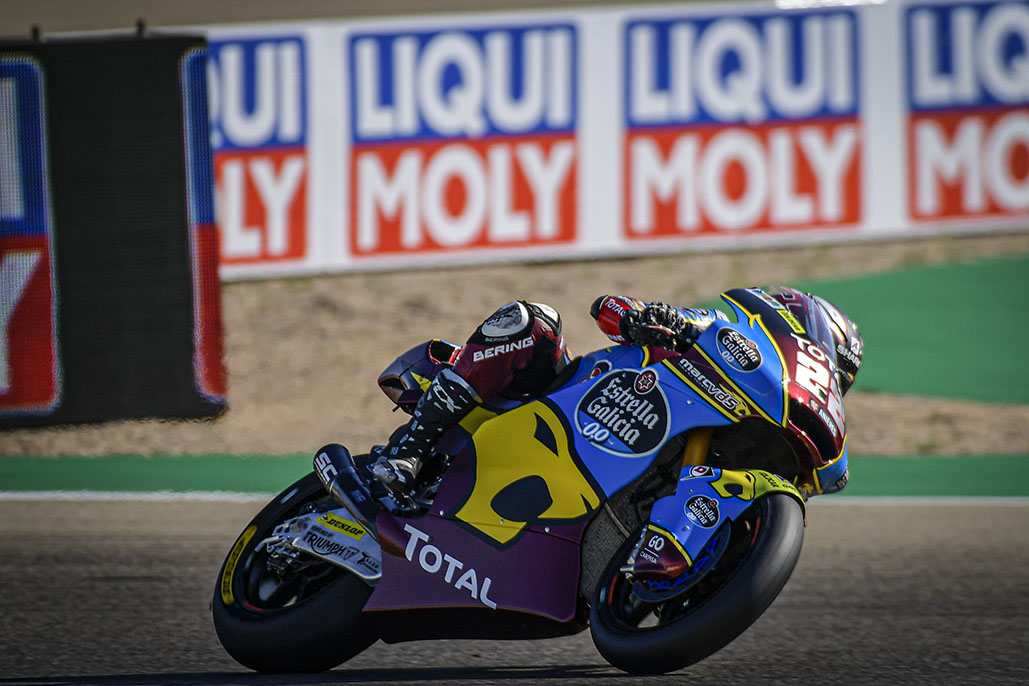 The Brit sets another new benchmark for pole, with Bastianini sixth and Marini down in 11th.

Sam Lowes (EG 0,0 Marc VDS) remains the man in form after an impressive Q2 at the Gran Premio Liqui Moly de Teruel, the Brit laying down the gauntlet of another new lap record for his 11th Moto2™ pole position. Jorge Navarro (Lightech Speed Up) was the man closest on the chase as he takes second, two tenths down, with Remy Gardner (ONEXOX TKKR SAG Team) completing the front row in a hotly-contested third place. Championship leader Enea Bastianini (Italtrans Racing Team) starts sixth, with third overall Luca Marini (Sky Racing Team VR46) down in P11 for the Teruel GP…

Marini was the man in the spotlight in Q1 as the Italian struggled to break the top 20 in Free Practice, but he moved through in third behind Bo Bendsneyder (NTW RW Racing GP) and Marcel Schrötter (Liqui Moly Intact GP), with Stefano Manzi (MV Agusta Forward Racing) the fourth man through. Could Marini make a dent in the top 18 in Q2? It was time to reset and find out.

Marcos Ramirez (Tennor American Racing) was the early pacesetter but Lowes didn’t allow the rookie to spend long at the summit, taking four tenths off and sitting just a tenth off the lap record to set his competition an almighty challenge early on. Navarro then cut Lowes’ gap down to less than a tenth though. before Gardner and Ramirez slotted themselves onto the provisional front row.

Lowes wouldn’t be stopped, however. With eight minutes to go, the number 22 slammed in a new lap record to set the benchmark once again, with Navarro still pushing and taking P2 but still a couple of tenths off Lowes. Could he do it next time around? The Spaniard was getting closer but his pole position dreams ended at Turn 7 as he slipped out of contention, ultimately ensuring the battle remained a brief duel and making it a Lowes-Navarro 1-2 on the grid.

The fight for third was close and Gardner held off Fabio Di Giannantonio (Lightech Speed Up) by just 0.009, with the fight for fourth even closer yet. Ramirez was forced to settle for fifth, but the rookie was just 0.001 off Diggia as he continues his impressive run of MotorLand form. Championship leader Bastianini had a more solid qualifying than last weekend and locks out the second row, the Italian now likely focused on trying to stop Lowes from winning – or limiting the damage.

Jake Dixon (Petronas Sprinta Racing) keeps his impressive speed rolling to spearhead the third row, ahead of Hector Garzo (Flexbox HP 40) and Augusto Fernandez (EG 0,0 Marc VDS) as the two Spaniards complete Row 3. Q1 graduate Bendsneyder picked up an impressive P10, his best Q2 result since the Dutchman qualified P5 in Qatar, with Marini forced to settle for P11 in the end but beating Aragon GP podium finisher Jorge Martin (Red Bull KTM Ajo) to it by less than a tenth.

At the end of the session, there was some drama for Martin too. He and Marco Bezzecchi (Sky Racing Team VR46) vented their frustration at each other after an incident in the closing moments of Q2, and title challenger Bezzecchi has to settle for P14, his first non-top 10 qualifying result of the season…

That’s a wrap from Saturday and Lowes reigns once again at MotorLand. Can anyone stop the man second in the Championship from taking his third win in a row? A victory would see Lowes take the title lead heading into the final three races, Bastianini is the only contender in the title race looking likely to challenge Lowes on Sunday afternoon…

Sam Lowes: “I’m really happy to get pole today after last weekend’s pole to win. A lot has changed in my life and riding since 2016, I’m different now, I’ve learned a lot and changed a lot, and this year I feel a lot more controlled and feel like I’m riding technically a little bit better which is helping me to be more consistent. There are many little things, but I’m feeling good, I’m on a bit of a wave at the moment with the results as they are but we have to stay focused. Obviously the race is the most important, we need to not get carried away because it’ll be a tough race as always. Just focus for 21 laps and see what we can do tomorrow.”