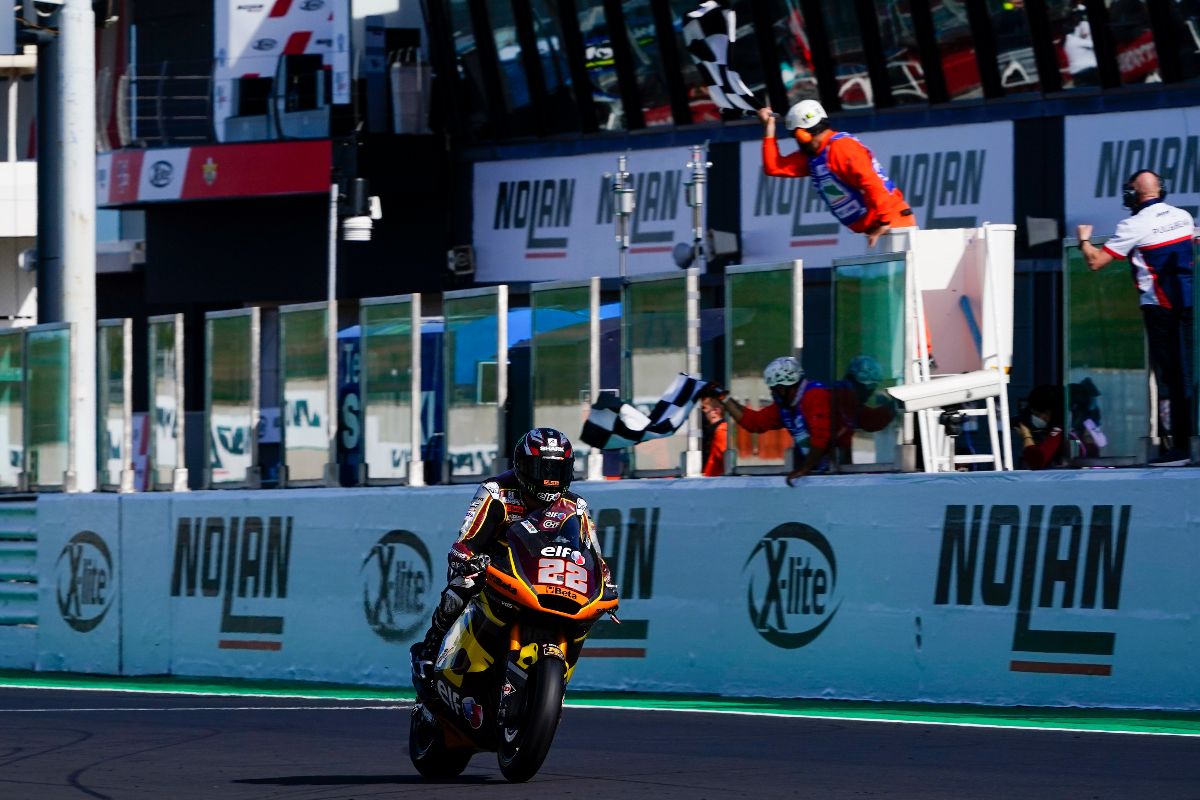 The Brit leads an Elf Marc VDS 1-2, Raul Fernandez crashes out the lead and Gardner capitalises despite taking seventh on a nevertheless tougher Sunday.

Sam Lowes (Elf Marc VDS) got his elbows out and put his foot down at the Gran Premio Nolan del Made in Italy e dell’Emilia Romagna, getting back on the top step in style at Misano. Teammate Augusto Fernandez made it an Elf Marc VDS Racing Team 1-2 despite a Long Lap penalty from qualifying, with the Spaniard just pipping compatriot Aron Canet after some late technical gremlins made life harder for the Aspar Team rider. Still, he completed the podium for another impressive race at Misano.

One moment stole the headlines, however, as Raul Fernandez (Red Bull KTM Ajo) suffered a huge crash out of the lead – rider ok – and on a day when teammate and Championship leader Remy Gardner was suffering some of his own dramas, a way back off the podium fight. But the Australian stayed calm, dug in, overcame a Long Lap given for some contact with Somkiat Chantra (Idemitsu Honda Team Asia) and crossed the line in seventh – doubling his advantage to 18 points ahead of the Algarve GP.

Polesitter Lowes grabbed the holeshot, with Canet making a good start to earn P2 ahead of Augusto Fernandez, with Raul Fernandez and Gardner P7 and P12 respectively at the end of the first lap. But by Lap 3, Raul Fernandez had made his way up to P4, with Gardner still scrapping away in the lower ends of the top 10.

A late lunge from Canet on then-race leader Jorge Navarro (+EGO Speed Up) at the tight Turn 14 right-hander allowed Lowes to retake the lead, while also gifting Raul Fernandez P3. The latter was then up to second on Lap 6, and with Gardner P8, as things stood Raul Fernandez was set to take the Championship lead…

Gardner then dived up the inside of Chantra at Turn 14 on his mission to make a comeback, but contact was made and the Thai rider crashed, adding a Long Lap Penalty to Gardner’s Sunday mountain to climb. Meanwhile, Raul Fernandez was swarming Lowes’ rear wheel for the lead…

By Lap 11, Lowes, Raul Fernandez and Canet were 1.3s clear of now fourth-placed Navarro, and then Augusto Fernandez passed Gardner too, the Australian back down to P8. Raul Fernandez then took the lead and the news of the Long Lap came for the Aussie in quick succession, with things seemingly going from bad to worse.

The everything changed. Heading down into Turn 8, Raul Fernandez was suddenly cartwheeling through the gravel, bike obliterated and out of the race, but rider ok. Another huge and unforeseen twist that left Gardner, despite the tougher race of it, suddenly holding a lot more cards. Still, he lost another position to Marco Bezzecchi (Sky Racing Team VR46), and the race was on to try and maximise the open goal…

Back up at the front, it was now Lowes vs Canet for victory. The Brit ran wide at Turn 8 to allow the Spaniard through into the lead, and another moment for the number 22 then allowed Canet to get up to an advantage of over half a second with five to go. A lap late though and Lowes was back in P1, elbows out to make his way through but clean aggression returning him to the lead.

Augusto Fernandez was also up to third after his Long Lap Penalty, the Spaniard passing a brightly coloured Celestino Vietti (Sky Racing Team VR46) as the rookie impressed on home turf, but just unable to stay with the podium fight.

As was Gardner, but the Australian did gain a position back as Bezzecchi slid out late on, putting the Championship leader back into seventh – enough to double his advantage, which seemed an unlikely feat until his teammate’s crash.

Up front though, the Lowes show rolled on and the Brit crossed the line over a second clear for an impressive return to the top step. Augusto Fernandez produced a stunning comeback ride to pick off Canet on the run to the line – handing MarcVDS their first 1-2 since 2017. Canet was disappointed with P3 as technical gremlins halted his final push, but it’s a fourth podium of the season for the Spaniard.

Rookie Vietti rode brilliantly on home soil to bag his best result of the season, and fifth place went the way of Navarro. Manzi had a quiet but impressive ride to P6 at his home track, and the Italian finished nine seconds up the road from Championship leader Gardner. It was a tough afternoon at the office for Gardner, but after Raul Fernandez’ crash, the Aussie extends his lead in the title race to 18 points with just two races to go.

That’s a wrap on Emilia-Romagna, and next up it’s a return to the Algarve and Gardner, after a rollercoaster day in Italy, has his first shot at the crown. But it’s an incredibly good venue for a few on the grid and one thing is for sure – no one will go down without a fight, whether in the battle for victory or the Championship! Come back for more in a fortnight!

Sam Lowes: “It was a complicated weekend for everybody to have the perfect setting and honestly I think the longest run I’ve ever done with the soft front is maybe 8 laps. I decided to use it cause of the conditions this weekend, the second half of the race was really difficult because it was sort of unknown for me with this tyre and I started to struggle. So I’m very happy to keep digging and keep with the pace. Normally I find a good advantage with the hard front but these conditions this weekend have been so difficult with grip with the left corners, so I felt definitely in the first half of the race I could take an advantage and then it was a bit of a struggle at the end but I dug in, I rode well and kept my pace to the end, tried manage the tyres the best I could.

“I’m really happy with the ride, I feel like all year I’ve been close to where I need to be and just missing a few results here and there. It’s all about building up these last few races. Well done to the team! Augusto also rode really well, he took a gamble with the hard front and well done to him, with a Long Lap he’s come back to second, Really good for the team, really good for me. At Portimão after crashing at Turn 1 at the start of the year I get a second chance so I can’t wait for that!”