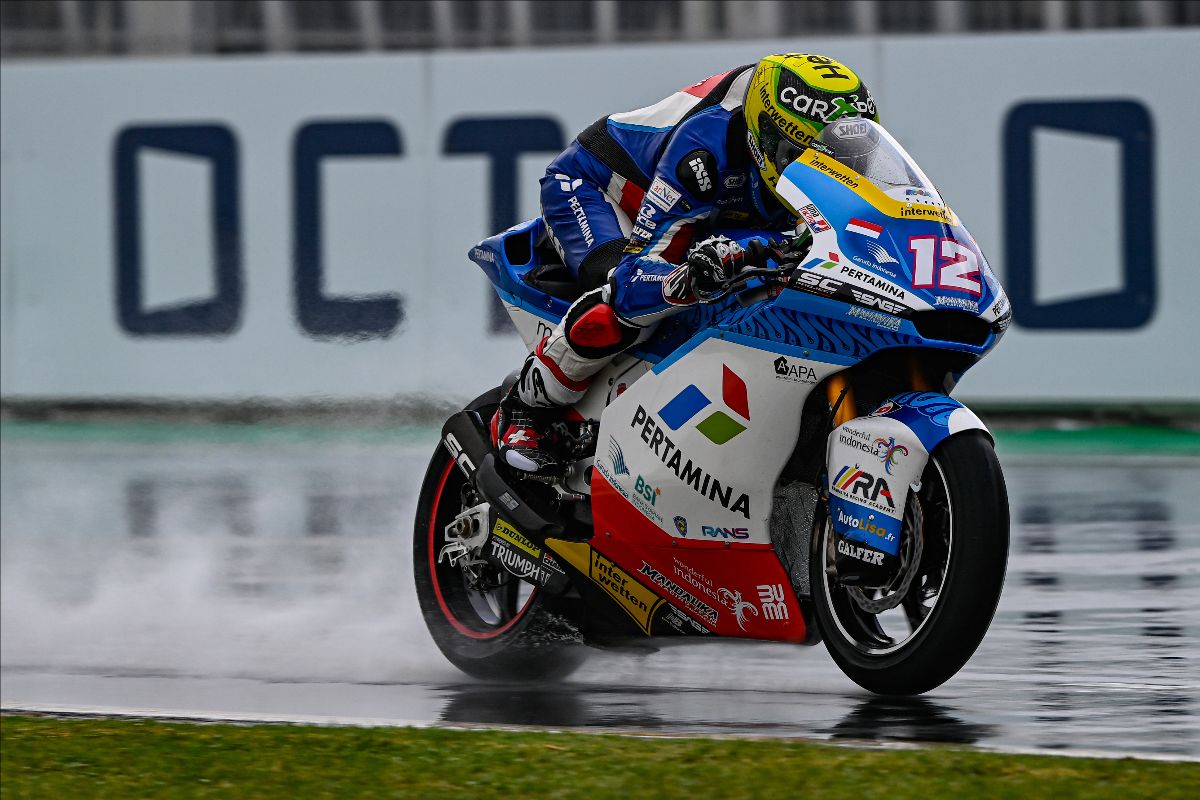 The Swiss rider heads the timesheets as the intermediate class get the brunt of the weather, with Red Bull KTM Ajo down the order on Day 1

FP1
The morning started with Lüthi on top and he set the time that wouldn’t be deposed, with Bezzecchi starting the day in second too, although a couple of tenths further back. Nicolo Bulega (Federal Oil Gresini Moto2) completed the top three on home turf.

Jake Dixon (Petronas Sprinta Racing) fell victim to the conditions, finding himself in the gravel at Turn 4, but he still posted a time good enough for P4 to make for a positive return to the intermediate class. Compatriot while Sam Lowes (Elf Marc VDS Racing Team) rounded out the top five.

FP2
The gloomy grey clouds overhead meant the wet track never had chance to dry as the intermediate class rolled out for a second rain-affected session. Bezzecchi set out his stall early, putting in a couple of fast laps to move to within 0.028s of previous P1, while Augusto Fernandez took a similar approach in recording his fastest lap of the day to move into second in the session.

Chantra took third in FP2 before going down in a fast crash at the end, rider ok, with Xavi Vierge (Petronas Sprinta Racing) fourth in the afternoon. Lowes was fifth once again.

Bulega found himself riding through the gravel but took sixth, ahead of a good session from Malaysian Hafizh Syahrin (NTS RW Racing GP) and American Joe Roberts (Italtrans Racing Team).

Combined timesheets
Lüthi leads the way with his FP1 best, with Bezzecchi second in both but his FP2 time putting him within half a tenth of the Swiss rider. Augusto Fernandez takes third, ahead of Chantra, with second, third and fourth all faster in the afternoon.

Bulega stays fifth thanks to his FP1 best, and likewise Dixon in P6. Vierge is seventh ahead of Lowes, with Syahrin and Roberts locking out the top ten.

As it stands it’s Stefano Manzi (Flexbox HP 40), Jorge Navarro (+Ego Speed Up), an impressive day for Barry Baltus (NTW RW Racing GP) and Fabio Di Giannantonio (Federal Oil Gresini Moto2) who are on to move through to Q2, but could it all change again in FP3?

Red Bull KTM Ajo will be hoping so, and we’ll find out on Saturday morning before qualifying decides the grid from 14:10 (GMT +2). Don’t miss it!