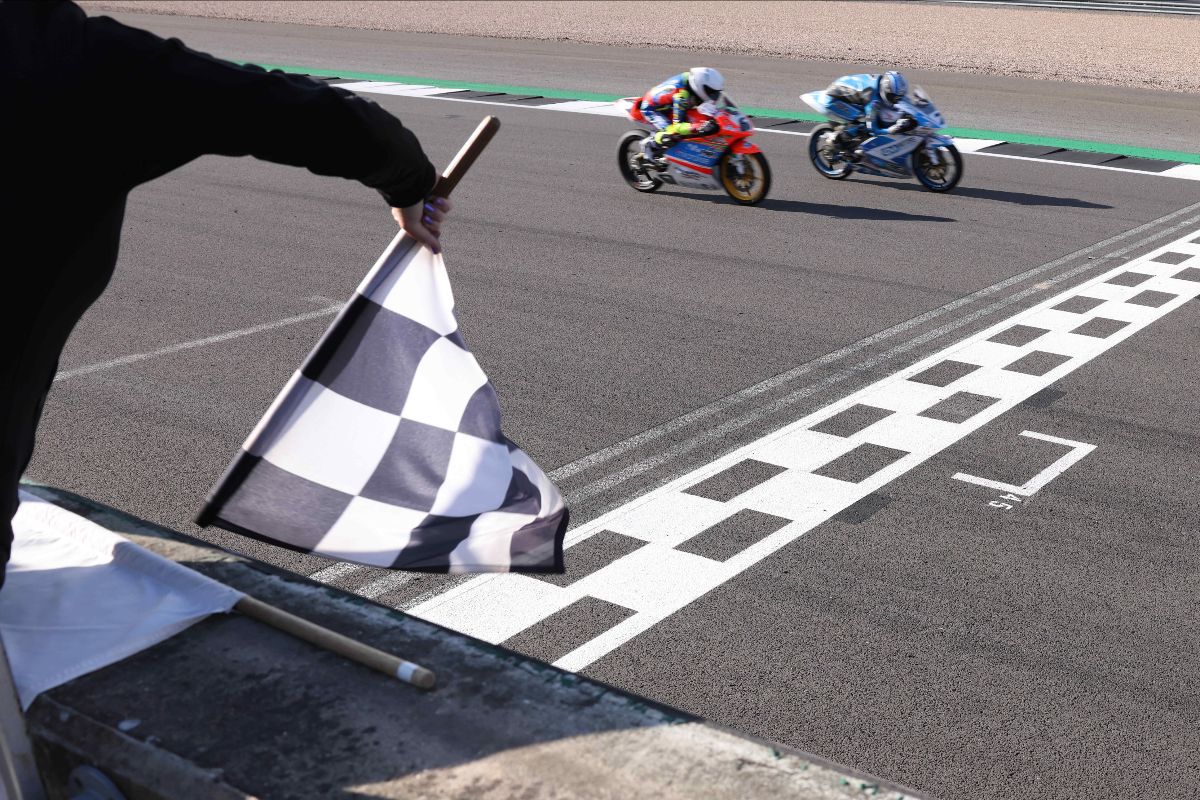 The two put the hammer down to duel round Silverstone, with Brown winning a group battle for third at the British GP

Jamie Lyons (C&M Motors Ltd / Tooltec Racing) and Casey O’Gorman (Microlise Cresswell Racing) put on quite a show in Race 1 at Silverstone, the two escaping early on and putting pedal to the metal to pull well clear of the field. The duel that followed went right to the wire, with Lyons just holding onto it to take his first Honda British Talent Cup win. O’Gorman still retains his record of first or second in every race he’s contested this season, however, with Carter Brown (City Lifting by RS Racing) completing the podium after coming out on top in a group battle behind the leading duo.

Drama hit for points leader Evan Belford (City Lifting by RS Racing) in qualifying on Friday as he suffered a technical problem and had to start from the back, and with then-closest challenger and teammate Johnny Garness on pole it looked like it could prove a costly Saturday. But not so, as it would turn out.

As the lights went out Garness got away well and took the holeshot from pole, and the number 57 was immediately pulling away. But before even the first lap was completed the race leader sadly slid out – rider ok – and suddenly Belford’s chance to do some damage limitation grew.

That left Lyons and O’Gorman in the lead, with Bailey Stuart-Campbell (151s Racing) tucked in behind as the initial stages saw the trio break away at the front. But Lyons and O’Gorman then began to stretch their legs and Stuart-Campbell found himself back into the clutches of the chasing pack, with a group battle then breaking out to decide who would complete the podium.

In the lead though, Lyons and O’Gorman were in a league of their own. By the time the final lap dawned their gap to the rest was up to 15 seconds, with the number 67 ahead over the line for the penultimate time. But Lyons was tucked in and by Stowe, where he’d already made a few moves stick earlier in the race, the number 7 was ready to pounce and pounce he did. Snatching the lead with a clean move up the inside, the Northern Irishman was back in the driving seat. O’Gorman didn’t budge though, glued to the back of the number 7, and round Woodcote for the final time he was looking for a gap up the inside. But he couldn’t quite find one, leaving the two blasting over the line almost side by side… but Lyons ahead for his first BTC win.

Woodcote also decided the battle behind and in the gaggle streaming round the final apex, Brown just kept it to take another podium and move himself into second in the standings following Garness’ crash. Sullivan Mounsey (iForce Lloyd & Jones) took fourth after a stunning start and a good race keeping pace with the podium fight, with Stuart-Campbell forced to settle for fifth. Corey Tinker (CT Racing) took an impressive sixth place, just beating Cormac Buchanan (Microlise Creswell Racing) as the returning Kiwi lost out a little in the last lap fray. He was the last of the group fighting for third as Harrison Crosby (Banks Racing) crashed and collected James Cook (Wilson Racing), taking them out of contention.

Rhys Stephenson (Rocket Racing) impressed to take P8, with the next rider up the points leader: Belford. The gap to the podium fight proved too big to bridge but the number 52 kept his head under pressure to take ninth and some valuable points – actually increasing his lead in the standings given Garness’ crash. Ollie Walker (Moto Rapido / SP125 Racing) completed the top ten almost glued to the back of Belford, with Rossi Banham (MLJ Racing) and Harley McCabe (MLav VisionTrack Academy) for close company too.

That’s Race 1 in the books and Belford off the hook as the Race 2 grid will be set by fastest laps… what will Sunday bring? A re-run of Lyons and O’Gorman’s chess match seems hard to look past, but the number 67 will be keen to turn the tables. Can anyone stay with them on take two? Find out at 16:00 (GMT +1) in Race 2!