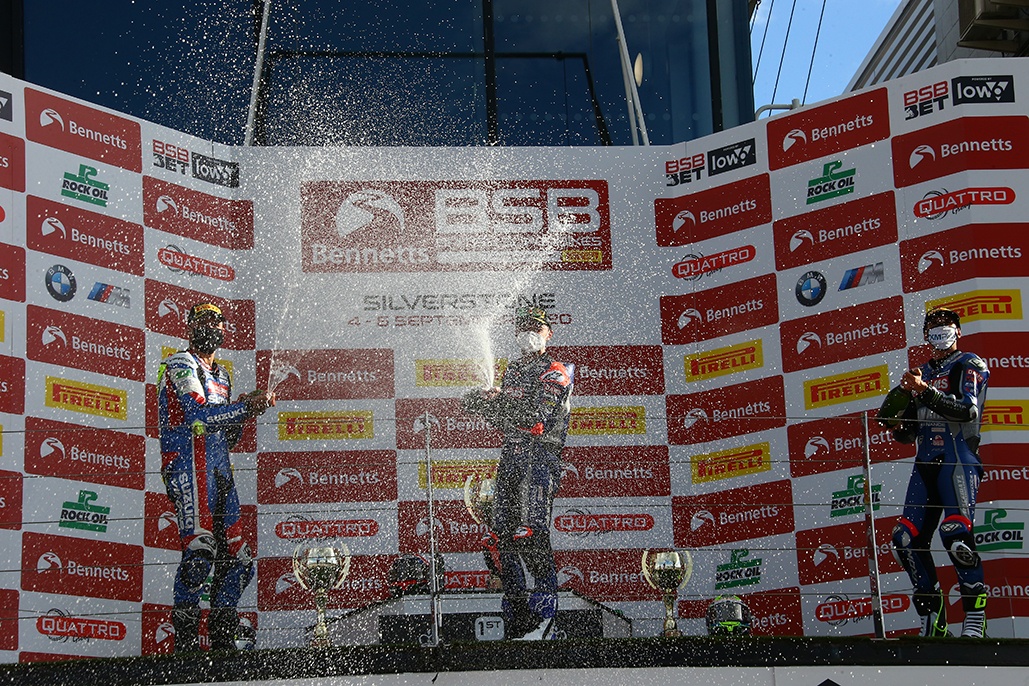 Tarran Mackenzie claimed a spectacular victory in the seventh round of the Bennetts British Superbike Championship at Silverstone this afternoon, becoming the sixth different race winner of the season to give McAMS Yamaha their first win in 2020.

At the start of the race, Danny Buchan launched off the pole position to lead the pack for the Rapid Fulfillment FS-3 Kawasaki team, however it was short lived as Andrew Irwin was instantly on the attack and stormed ahead before they crossed the line for the first time.

Buchan was under fire from the opposition and soon it was the Honda Racing pairing at the front of the field, with Andrew leading Glenn and soon Jason O’Halloran was also in the fight for the lead, with Buchan then in fourth.

On the fifth lap, Glenn Irwin grabbed the lead from his brother and the pair looked like they would try and break the pack, however O’Halloran was in close contention, and Kyle Ryde was into fourth and proving to be a threat on the Buildbase Suzuki.

By lap eight Ryde had moved ahead of O’Halloran for third with the Australian also having his teammate for company, as Mackenzie sliced his way through the field from his fourth row start position.

Mackenzie wasted no time in getting ahead of O’Halloran and by lap 12 he was into third place, before passing Andrew Irwin a lap later. The Honda Racing rider was trying to fight back, but a mistake into Brooklands meant he lost serious ground and then would have to do the work all over again.

At the front Mackenzie was soon putting the pressure on Glenn Irwin and a decisive move on lap 16 put him into the lead for McAMS Yamaha, with Glenn Irwin then having Ryde for company in the tussle for second place.

Ryde wasn’t able to make a move stick until lap 22 when he was able to move into second and then a lap later O’Halloran also carved ahead of Glenn Irwin to push him out of a podium position. On the final lap Mackenzie had the margin he needed to claim an emotional victory and his first of the season.

Ryde meanwhile celebrated his first ever Bennetts BSB podium finish, making him the eighth different finisher in the top three in 2020, with Buildbase Suzuki the fifth different team to celebrate a podium result.

Glenn Irwin and Andrew Irwin finished in fourth and fifth ahead of a huge contest for sixth place with Josh Brookes holding off Lee Jackson, Christian Iddon, Danny Buchan and Tommy Bridewell, who started last on the grid, completing the top ten.

Tarran Mackenzie (McAMS Yamaha)
Round 7 race winner
“My last podium was at Snetterton at round five last year so I was pretty emotional. I had a really strong start to last year and then broke my wrist at Thruxton, and after that it just became difficult with injuries and not having the confidence and I reset in the off season.

“During lockdown I worked really hard, and then thought ‘when I get to round one I will be strong and back up the front where I know I can be, and it didn’t happen. Then it didn’t happen at Snetterton and in the last race at Snetterton I had good pace, for a podium if not a win, so that gave me a lot of confidence.

“For me and probably the team as well, we didn’t understand the front tyre maybe as much as some other people did, and that was really hard. It was understanding it and getting the feeling and the confidence, and once I got that back, I knew coming in to this weekend I could be strong.
“I have been strong here since I started riding a Superbike, so I was really annoyed in qualifying to be starting 12th. I didn’t expect to be getting a win – maybe a podium, because of my pace I had in practice, but I got a really good first couple of laps. I came through to fifth or sixth, then picked them off and pulled a gap.

“I was really surprised to see I had a gap. I had to use my tyre a lot at the start and the middle of the race to make some ground on the leaders, so starting on the front row tomorrow should help that. I can maybe conserve it a little bit. The last couple of laps I just backed off slightly as I didn’t want to make any mistakes. It felt like a long nine laps when I was in front, but I am really happy so a big thank you to the McAMS Yamaha team, I am over the moon and can’t wait for tomorrow.”

Kyle Ryde (Buildbase Suzuki)
First podium finish in Bennetts BSB
“It’s been quite a few practices I have topped now and not really had a decent race, but that was the perfect race. The strategy we had was pretty good.

“I was really pleased when Taz came past me halfway through the race because it gave me an understanding of what I could do and gave me the same braking markers as qualifying.

“I was struggling at the start of the race being stuck behind a couple of people and I really lost my rhythm. Then when Taz set the pace, that got me a podium. It nearly got me a win but he was that fast!

“I would just like to thank the Buildbase Suzuki team, they deserve this just as much as me. We have had a bit of bad luck but they have fixed it and I can’t wait for tomorrows races.”