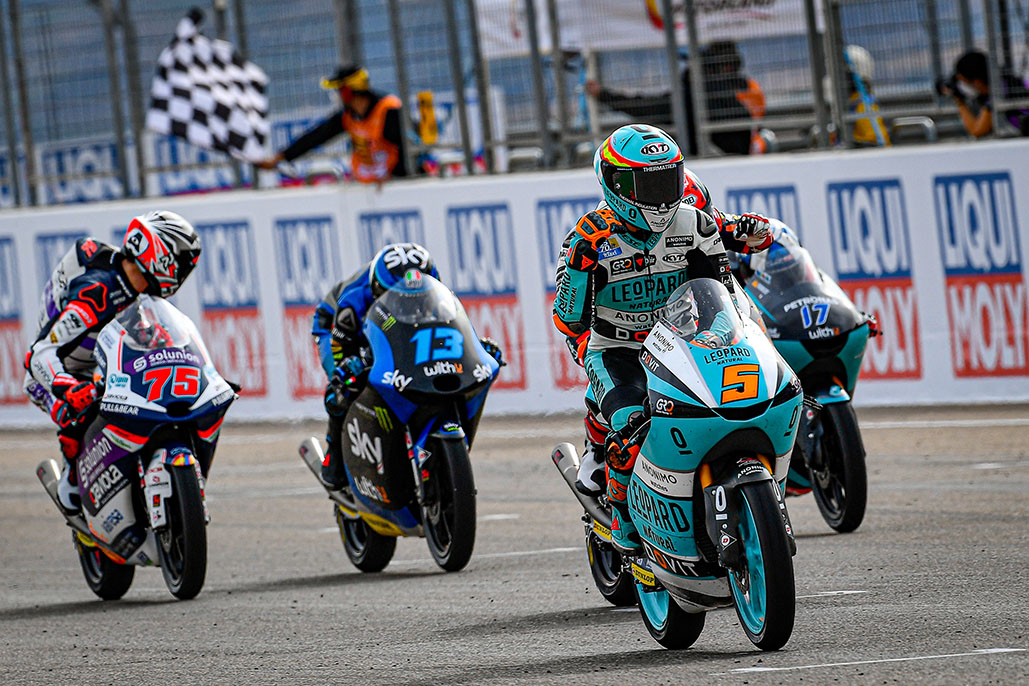 The Spaniard does it again, with Sasaki taking his first podium in second and Toba back on the rostrum for third.

Jaume Masia (Leopard Racing) is truly the master of MotorLand! A week on from his first win of the year, the Spaniard went back-to-back with another stunning victory – and it’s Honda’s 800th in Grand Prix racing. It was as close as you like in classic Moto3™ style, however, with Ayumu Sasaki (Red Bull KTM Tech 3) taking his first Grand Prix podium in second, just 0.051 off the win, and Kaito Toba (Red Bull KTM Ajo) in third… still within a tenth and a half of the top.

It was polesitter Raul Fernandez (Red Bull KTM Ajo) who managed to hold on to the front through Turn 2, the Spaniard swooping round the outside of fast starter (Tony Arbolino Rivacold Snipers Team) and Celestino Vietti (Sky Racing Team VR46) able to fight off key rival Albert Arenas (Solunion Aspar Team) – but not for long, as the Championship leader struck straight back. These were the early bouts though, and plenty was to come as the classic Moto3™ freight train got in gear.

On take two in Teruel, there would be no group splintering off at the front as what seemed like the whole field snaked around MotorLand Aragon, locked together in lightweight class combat. As ever, the leading positions were ever-changing. Down the back straight it was slipstream city as Fernandez slipped from P1 to P3, but on two consecutive laps the Spaniard bit straight back at Turn 1. Fernandez, Arenas, Vietti and Gabriel Rodrigo (Kömmerling Gresini Moto3) all took turns leading on the opening handful of laps, with Fernandez on Lap 5 getting a bit beaten up heading into Turn 1 – the Aragon GP podium man shuffled down to P10. Arenas then took to lead on Lap 6 as Darryn Binder (CIP – Green Power) did his usual Sunday morning routine of fighting his way through the pack, the South African up to P2.

For the next few laps, Arenas was holding firm at the front as the top 26 riders were all line astern. It really was a Moto3™ freight train at MotorLand. However, Arenas was looking formidable and even when the chasing pack was in the slipstream, no one could get past him down the straight. The title chase leader wasn’t getting away though…

With nine to go, Toba tried to take the lead at Turn 1 but he was slightly wide and Arenas went aggressive on the switchback into Turn 2 and held P1, Toba losing out and Masia moving up to try an attack nexy.

Masia was using the Honda grunt down the back straight, but Arenas kept biting back at Turn 1. The Aspar rider was supreme on the brakes, but Masia wasn’t allowing him to get away. After an earlier moment, John McPhee (Petronas Sprinta Racing) was back in the hunt for victory and up to P4 and with three laps remaining as the battle royale kicked into overdrive. Masia made a move stick at Turn 1 on Arenas but the latter was back through at Turn 7. Toba was up the inside of both Binder and McPhee, but the Petronas rider got back into third as Masia aimed to get Arenas down the back straight.

However, Arenas continued his great run down the 1km straight. With two laps to go, Masia grabbed the lead at Turn 7 instead, but the Spaniard was then dropped back to third as both Arenas and McPhee carved past at Turn 12. Masia got McPhee back down the straight, but Arenas led onto the last lap and the scene was set.

Done waiting, Masia struck early to force his way through at Turn 1, with Toba making McPhee’s life difficult just behind too. Sasaki followed his compatriot through on McPhee as well, as Arenas squeezed past at Turn 7, and so it was all down to the back straight. Could Arenas hold it? Once more he got a great run out of Turn 15 but Masia was reeling him in and the two KTMs of Toba and Sasaki were tucked in too. Into the braking zone, all three soared past Arenas and Masia stole the lead with two corners to go, then ultimately holding it to the line to take his first back-to-back wins and Honda’s 800th Grand Prix win.

Toba had been in second but ran slightly wide, and Sasaki needed no further invitation. Slicing up the inside, the number 71 also got some great traction to home in on Masia – crossing the line just 0.051 down but nevertheless taking a stunning first Grand Prix podium to bounce back from some terrible luck in 2020. Toba was forced to settle for third but got back on the podium, also a bounce back.

Arenas slipped to P4 in the last two corners but crucially, he beats the likes of Vietti and Ai Ogura (Honda Team Asia), key Championship contenders. Vietti finishes just three tenths off the win in fifth though, with McPhee in P6. Deniz Öncü (Red Bull KTM Tech3) rode superbly to mount a comeback to P7, with Binder suffering in the final couple of laps to finish P8 ahead of Ogura. The Japanese rider was less than a second away from the win but still lost more ground in the fight for the title. Arbolino picks up P10, 2.259 seconds adrift from the win as a crash split the pack on the final lap.

That crash was late heartbreak for Sergio Garcia (Estrella Galicia 0,0) as Tatsuki Suzuki (SIC58 Squadra Corse) crashed ahead of him, leaving the Spaniard nowhere to go, and he lost out on a solid result after slicing through from P28 on the grid. There were no other crashes.

Another rip-roaring Moto3™ race goes down to the wire, with Masia making history for the second weekend in a row. What does all this mean for the Championship? Well, Arenas extends his advantage to 19 points over Ogura with three races to go. Vietti is 20 points behind Arenas with Masia now right in the hunt, 24 points split tdown heading into the final Valencia and Portimao rounds. Game on!

Jaume Masia: “I’m really happy, it’s an amazing sensation to win back to back. I’m really happy because after the win last week I felt a bit more pressure because I was closer than before in the championship so I tried to keep my mind calm and keep working with my team. I kept believing in myself, today I struggled a bit more because the rhythm was really fast, it seems like I was fighting all race with the KTMs, they brake really strong so I struggled more but I did the same strategy as last week. Today I struggled more in the straight as the KTMs were so fast but we’re here again, two wins, closer and we’ll see.”