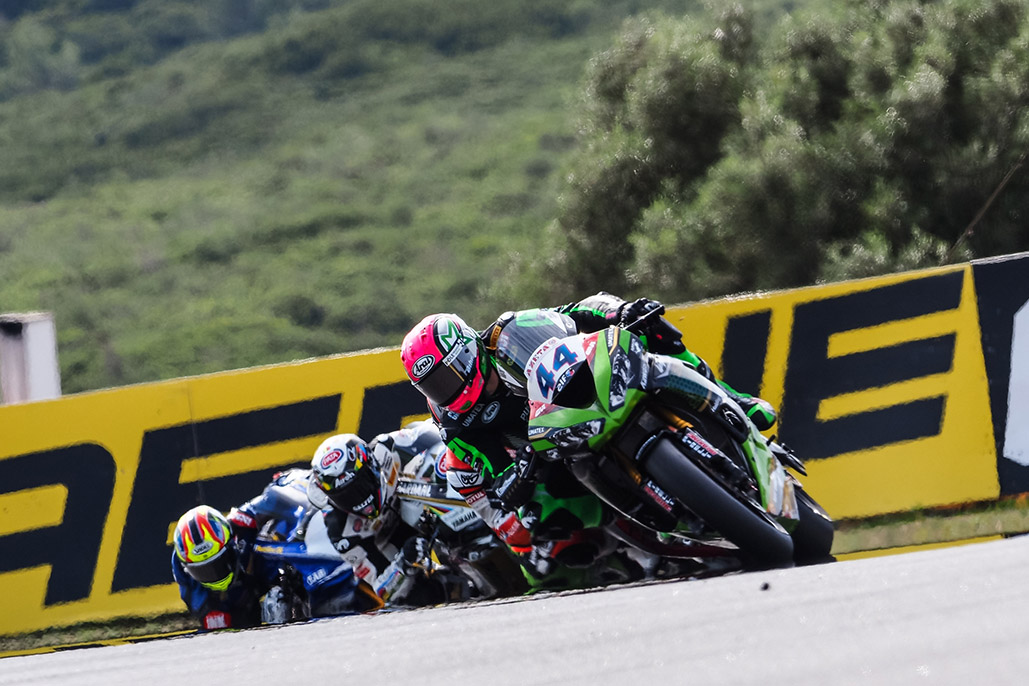 There were 18 laps of drama, action and battles as the FIM Supersport World Championship came to a thrilling conclusion at the Circuito Estoril for the Pirelli Estoril Round. The race was eventually won by Lucas Mahias (Kawasaki Puccetti Racing) despite pressure from, at various points, up to seven other riders throughout the race as the season ended in sensational style.

Andrea Locatelli (BARDHAL Evan Bros. WorldSSP Team) had started the race from pole position but soon found himself down in fourth place having been jumped on the opening lap by Mahias, teammate Philipp Oettl and Raffaele De Rosa (MV Agusta Reparto Corse); a sense of what was to come throughout the race right from the start.

The lead changed once again on Lap 8 as Oettl passed De Rosa at the right-hander of Turn 2, but that would only last another lap as De Rosa reclaimed the lead ahead of Mahias and Oettl, with Locatelli lurking just behind – although the Italian faced pressure from South African Steven Odendaal (EAB Ten Kate Racing). Mahias took the lead with an aggressive move on Lap 9 at Turn 9 on De Rosa, with the battle continuing throughout the race.

De Rosa took the lead of the race at Turn 1 on Lap 14 but was unable to hold it for the rest of the race; Mahias taking the lead on the final lap from teammate Oettl after Oettl had taken the lead on Lap 17. It meant Mahias would take his second victory of the year ahead of Locatelli in second; the 2020 Champion moving ahead of De Rosa by just 0.002s on the line.

Odendaal finished the race ahead of Oettl after the German fell down to fifth in the latter stages of the race, with Isaac Viñales (Kallio Racing) finishing sixth as he almost pipped Oettl to a top five finish. Oettl’s fifth place was enough to overhaul Jules Cluzel (GMT94 Yamaha) in the Championship for third place with Cluzel finishing in ninth; Manuel Gonzalez (Kawasaki ParkinGO Team) in seventh and Estonian Hannes Soomer (Kallio Racing) in eighth.

Hikari Okubo (Dynavolt Honda) was an early retirement from the race as he pulled off the track on the opening lap; the Japanese’s rollercoaster season ending in disappointment as he was forced to retire from the race on the opening lap of the race. Galang Hendra Pratama (bLU cRU WorldSSP by MS Racing) and Peter Sebestyen (OXXO Yamaha Team Toth) were also retirements from the race, Indonesian rider Hendra Pratama crashing out of the race.

P1 Lucas Mahias (Kawasaki Puccetti Racing)
“It’s a big emotion for me. It’s my last race in Supersport, I love this category and winning my last race is very good for me. It’s a similar feeling when I won the World Championship. In these conditions, because Magny-Cours was different conditions with the rain and you have the big difference of the rider, but now it’s normal conditions and the long straight. My bike is not very fast in a straight line and I needed a lot of fight. I think it’s the best race of the year! Now I’m ready for the next challenge.”

P2 Andrea Locatelli (BARDAHL Evan Bros. WorldSSP Team)
“I lost a little bit today as we had a small problem with the electronics on the bike. It’s normal. It’s the first time but I am very happy for the season. Every time we are very confident and very fast. We close with a podium and this is important and for my guys, it’s so good. Now we look forward for the new season.”

P3 Raffaele De Rosa (MV Agusta Reparto Corse)
“For sure, it’s a nice race. After yesterday, after the crash, my first feeling was very down. Today was not easy to get up. I tried to do my best. This morning, after warm up, the team changed everything on the bike. For the race, I had a completely new bike. I want to say a big thank you to the team. Today, the bike was unbelievable.”