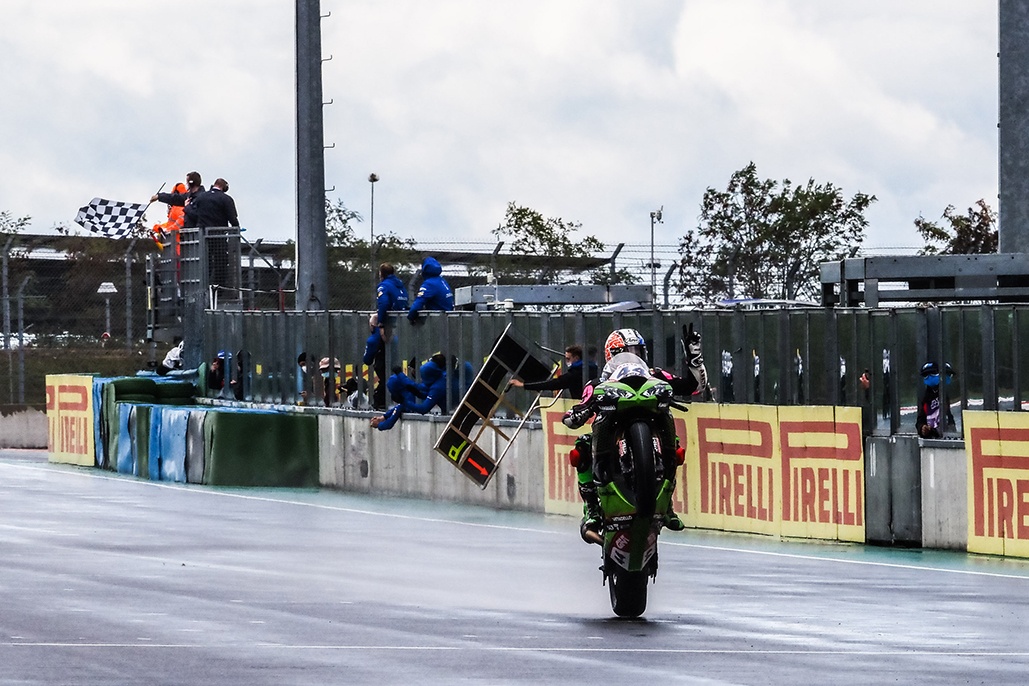 A long-awaited victory for Lucas Mahias (Kawasaki Puccetti Racing) came to an end in Race 2 for the Pirelli French Round in stunning fashion as he claimed a dominant victory at the Circuit de Nevers Magny-Cours; the Frenchman claiming a home victory as his first FIM Supersport World Championship win of 2020.

Mahias started the 18-lap race from second place but immediately leapt to the front of the field and instantly pulled out a gap to the rest of the field as he searched for his first victory of the season. The Frenchman finished well clear of second-place Kyle Smith (GMT94), who had started from pole position, as Smith secured his second podium of the 2020 season. Hannes Soomer (Kallio Racing) backed up his first WorldSSP podium in Race 1 with a third-place finish in Race 2; the Estonian taking advantage of Can Öncü (Turkish Racing Team) crashing out on Lap 15 at Turn 15 although the Turkish rider was able to re-join the race.

Steven Odendaal (EAB Ten Kate Racing) finished in fourth place after a late-race battle with Kevin Manfredi (Altogoo Racing Team); South African rider Odendaal ahead of Manfredi when the Italian went down on the final lap, but he was able to recover to tenth place. It meant Czech rider Karel Hanika (WRP Wepol Racing) secured a top five position, ahead of Manuel Gonzalez (Kawasaki ParkinGO Team).

P1 Lucas Mahias (Kawasaki Puccetti Racing)
“I’m really happy! It’s one year since I last won and to do it at my home race is incredible, same as last year. I wasn’t really confident at the beginning because the bike was not perfect and, again, there was rain. I pushed in the beginning to get a good temperature for my rear tyres and when I looked at the gap I continued to push. The last eight laps were very long as I tried to manage my rear tyre and it got too cold. It’s difficult. Every lap, I was thinking about pushing, not pushing, pushing, not pushing. It’s very good for me, for Kawasaki and very good for the French fans. The weather is not nice but there are lots of people here.”

P2 Kyle Smith (GMT94 Yamaha)
“It was a difficult race. Lucas got out in front, I was struggling a lot with rear grip and the feel. When there’s a little bit less water on track I’ve not had a problem, but the same in yesterday’s race and today I struggled a bit with the feel. I settled for second, happy for the team and a good result.”

P3 Hannes Soomer (Kallio Racing)
“It’s a really good way to finish the weekend. I knew I had to get a better start than yesterday but it didn’t happen. I made some stupid mistake on the first laps and lost a lot of time. Then I start to find my speed again and start to catch the guys in front. When I was behind Öncü, I was on the limit but saw that I was faster than him. With three laps to go, I thought I could catch him. He made a mistake so it was a bit easier for me! I am really happy with this result.”

admin - October 26, 2021
Install
Installing uses almost no storage and provides a quick way to return to this app.
Install