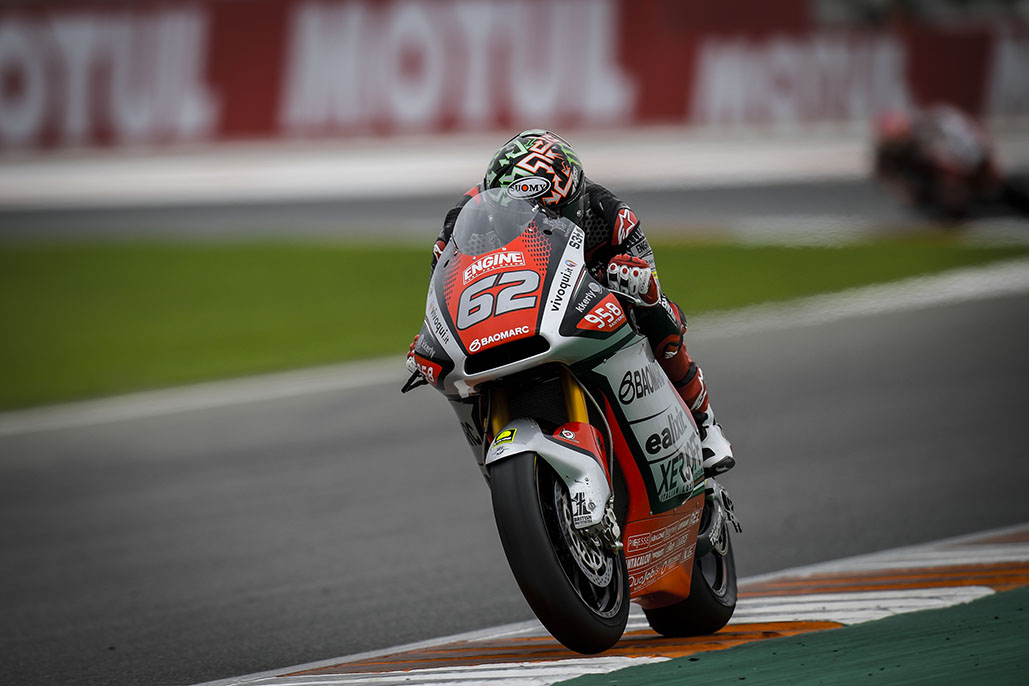 The Italian takes a stunning first pole position as he pips home hero Garzo, with Marini 10th, Bastianini 12th and Lowes 18th – the Brit after a big crash on Saturday.

Not since 1976 in the 350cc class has an MV Agusta started a Grand Prix race from pole, but Stefano Manzi (MV Agusta Forward Racing) changed that on Saturday at the Gran Premio Motul de la Comunitat Valenciana. He took his first pole position with a new lap record to head a front row split by just 0.076, with home hero Hector Garzo (Flexbox HP 40) forced to settle for second and Marco Bezzecchi (Sky Racing Team VR46) completing the top three. Of the top three in the title fight it’s Luca Marini (Sky Racing Team VR46) who starts furthest up the grid in 10th, with Enea Bastianini (Italtrans Racing Team) 12th and Sam Lowes (EG 0,0 Marc VDS) in P18 after a big crash in FP3.

In Q1 it was Lorenzo Baldassarri (Flexbox HP 40) who led the way, but the gap was infinitesimal for the Italian as Jorge Martin (Red Bull KTM Ajo) slotted into second just 0.004 back. Simone Corsi (MV Agusta Forward Racing) was closer still in third, 0.002 in further arrears, with Tom Lüthi (Liqui Moly Intact GP) the fourth man through and still within less than half a tenth. That left Europe GP podium finisher Remy Gardner (ONEXOX TKKR SAG Team) just missing out, and the Australian will be looking to move forward quick-sharp on Sunday.

As Q2 began, a lot of eyes were on Lowes. After a huge FP3 crash, the Brit was back on track sporting a bandaged right wrist after being declared fit. His opening lap time was nearly four seconds down on Bo Bendsneyder’s (NTS RW Racing GP) 1:35.131 lap time, but that wasn’t the case for long. Garzo then took turn to lead the session before Fabio Di Giannantonio (MB Conveyors Speed Up) shot to the summit; Q1 graduate Simone Corsi then moving into third with eight minutes to go.

Manzi was on a march though. The Italian was top of the tree by 0.004 over Di Giannantonio as Marcel Schrötter (Liqui Moly Intact GP) climbed to P3 soon after, puting three manufacturers sat on the front row in Moto2™ as the clock ticked down and down…

The times were again incredibly close. Less than a tenth covered the top five before Marini slotted into fifth, just 0.095 off the top. Red sectors were everywhere though and soon there was another man on a mission: Garzo. A 1:34.431 came in from the Spaniard as Bezzecchi clawed his way up to P2, with Championship leader Bastianini still down in tenth with two minutes to go.

Manzi then grabbed the spotlight for the second time. On his final lap, the Italian sliced round to claim provisional pole and break Garzo’s heart, making MV Agusta history with their first pole position since MotoGP™ Legend Giacomo Agostini in 1976 at Le Mans. Rookie Garzo’s second place is nevertheless his best yet in Moto2™, with Bezzecchi striking late to give both a scare as last week’s winner slotted into third.

Di Giannantonio spearheads Row 2 in P4, and he’s joined by Jorge Martin and rookie Marcos Ramirez (Tennor American Racing). Schrötter eventually slipped to P7, just ahead of Q1 graduate Baldassarri as he returns to form to start from P8. Bendsneyder took ninth as the Dutchman got his third top 10 qualifying result of the campaign.

Marini was under four tenths away from pole but ends up down in P10. However, importantly for the Italian, he’s ahead of the two riders ahead of him in the Championship: Bastianini will start P12 behind Corsi, three places better than last weekend but still far from ideal after another tougher session. Lowes, although cutting his gap to the top down and down, struggled in Q2 and immediately had ice on his right wrist when he was back in the box. The Brit has a salvage job on his hands from P18.

Bastianini has the chance to win the title in Valencia. The easiest way is if he wins, Lowes doesn’t finish better than 11th and Marini no better than third. But can he do it? Watch how the Moto2™ title race unfolds at 12:20 local time (GMT+1) on Sunday afternoon as the penultimate race of 2020 gets underway!

Stefano Manzi: “This morning I was 11th, at only two tenths, but I was 11th. So many riders are so close and it’s difficult to make the difference but today in qualifying I did a really good lap and took pole, and I’m so happy. I think there is a potential podium, my rhythm wasn’t bad all weekend, yesterday and this morning, we have to see on a full fuel tank but I think I can do a good race.”