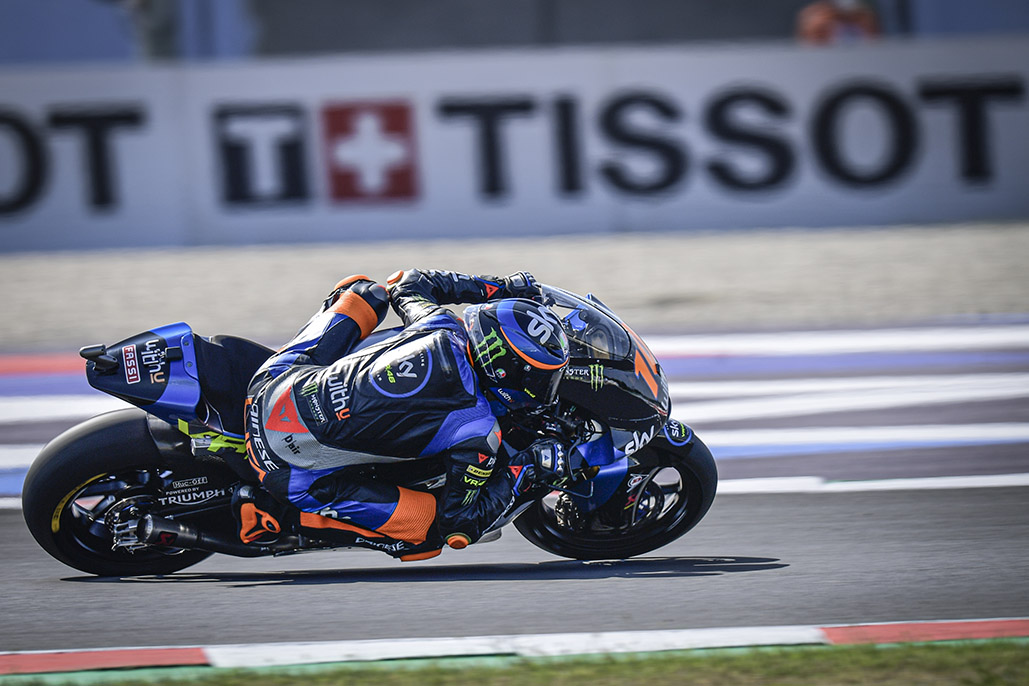 Sky Racing Team VR46 duel it out for pole, with Vierge completing the front row three tenths off the home heroes.

A 1:35.271 for Luca Marini (Sky Racing Team VR46) – and a new lap record to boot – hands the Italian a second consecutive pole position of the season as he beat teammate Marco Bezzecchi by just 0.036 in Moto2™ Q2 at the Gran Premio TISSOT dell’Emilia Romagna e della Riviera di Rimini. Petronas Sprinta Racing’s Xavi Vierge completed the front row, 0.348 off pole position despite a late crash for the Spaniard.

The first laps were slammed in and it was Bezzecchi who led the way from Vierge, but Marini’s second lap was absolutely incredible. Enea Bastianini’s (Italtrans Racing Team) FP3 lap record was a 1:35.649 in the morning, but that was obliterated by Marini. The Championship leader set a 1:35.271 to lay down the gauntlet, with Bezzecchi going P2, 0.195 seconds off. Aron Canet (Inde Aspar Team Moto2) and Jake Dixon (Petronas Sprinta Racing) got themselves into the top four in the early stages. too.

Sam Lowes (EG 0,0 Marc VDS) then jumped onto the provisional front row, 0.4 off, and went quicker on his next lap to get the gap down to 0.3, but the Brit remained P3. Meanwhile, Bezzecchi was on a charge and was right on Marini’s pace halfway around the lap. The Moto2™ sophomore was then under his teammate’s blistering time by 0.032, but he couldn’t hold it to the line, ultimately missing out by 0.036. Just ahead of Bezzecchi was Vierge, who shot onto the front row in P3. That secured the position for Sunday although immediately after, the Spaniard tucked the front at Turn 1 – rider ok.

Lowes was then going great guns again and was less than a tenth away at the third checkpoint, but something went wrong in the fourth split and the British rider lost four tenths. Bezzecchi and Marini were again both setting a very similar pace to pole, but neither could maintain it to the line. Not that it mattered, as the Sky VR46 duo remained a class above in qualifying, the two Italians getting the business done on home turf once again on Saturday.

Despite his crash, Vierge kept P3 to secure his first front row start since the 2019 Dutch GP. Lowes threatened to displace the number 97 in the latter stages but couldn’t string a lap together, but the Brit will be pleased with P4, with a podium seemingly in sight for the rider who claimed P8 from pitlane last weekend. Bastianini will be hoping to challenge the leading Italians in the opening stages too in a bid to minimise the potential damage that could be caused with Marini and Bezzecchi on song.

Canet completes Row 2, the rookie sensation 0.532 from pole and having a much improved weekend at Misano second time around, but it was close as the Spaniard beat Jake Dixon by just 0.011. P7 is nevertheless Dixon’s best Moto2™ qualifying result, and his first top ten since the 2019 Czech GP.

Augusto Fernandez (EG 0,0 Marc VDS) suffered a big crash at Turn 5 in Q2 – rider ok but to be reviewed on Sunday morning.

After the showstopper we had last Sunday, will it once again be a tale of two teammates on Sunday? Can anyone stop Sky Racing Team VR46? It’s looking like a difficult task, but you’ll find out at 12:20 (GMT+2) on Sunday!

Luca Marini: “It’s a very good weekend for now, thinking about this weekend and the past race, I was trying to improve riding style or something in the bike, thinking about that I could work well with my crew, we did a good step, also with the bike we changed something compared to last race and the feeling is coming better. Also the new soft tyre this weekend, at the beginning it was difficult but then we changed the bike and found a good compromise for this qualifying. I was not feeling so fast in the lap, but I was precise, didn’t make so many mistakes, trying to do what I’m talking about with my electronics engineer all weekend and be precise, so that’s it. I’m very happy with the new record, everybody made a step forward, the level in Moto2 is very high and I’m happy to make this record… which stays until next year!”