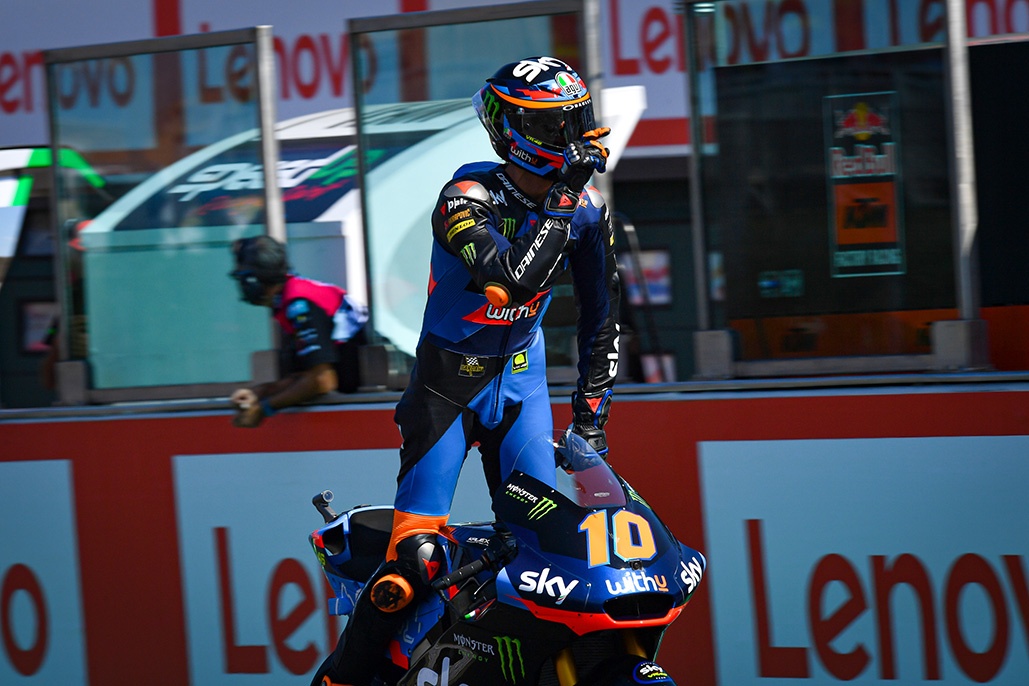 Add three Italians, a racetrack on the Rimini Riviera and a close Championship battle and what do you get? One fabulous race!

Sky Racing Team VR46 put on one hell of a show at Misano World Circuit Marco Simoncelli, with teammates Luca Marini and Marco Bezzecchi duelling it out to give the home fans a rollercoaster of a Moto2™ race. In the end though, it was Marini who came out on top as he managed to edge clear in the last few laps, taking his second victory of 2020 and extending his Championship lead. Bezzecchi was forced to settle for – and defend – second place, with second in the standings Enea Bastianini (Italtrans Racing Team) less than a tenth behind him over the line.

Marini would start the race from pole position after Remy Gardner (ONEXOX TKKR SAG Team) was forced out of the race after fracturing both his left hand and foot in a monster Warm Up highside, and when the lights went out Marini took full profit with the holeshot. Teammate Bezzecchi calmly settled in behind him but behind them, Bastianini wasn’t having the same privilege as a determined Marcel Schrötter (Liqui Moly Intact GP) edging through to third in the early stages.

There was already a gap starting to form from the rear wheel of Bezzecchi to the front wheel of Schrötter, and Bastianini’s chances at a third win of the year were slipping away before a handful of laps had even been completed. The title challenger obviously knew that too though, diving under Schrötter to reclaim third and setting his sights on the Italian duo ahead.

At the front, Marini was starting to flex his muscles as he slowly but surely moved half a second clear of his teammate. A fastest lap of the race, with five then completed, allowed the Championship leader to move over six tenths clear at the front with Bezzecchi unable to conjure up any type of response at that stage.

Meanwhile, an almighty scrap for the top five was starting to take shape. Schrötter, who had by this time dropped off the back of Bastianini and had Xavi Vierge (Petronas Sprinta Racing) burst past him, had teammate Tom Lüthi, Fabio Di Giannantonio (+EGO Speed Up) and Augusto Fernandez (EG 0,0 Marc VDS) for close company, with nobody wanting to let up.

Marini’s push towards home glory took another firm step forwards soon after when he was able to open out the gap to over a second on Lap 9, and a small Bezzecchi error in sector one allowed the number 10 to extend his comfort buffer even further…

In the fight for fifth, Schrötter was able to eek out an advantage over Di Giannantonio, who had momentarily got the better of Swiss veteran Lüthi. Jorge Navarro’s (+EGO Speed Up) miserable 2020 run then continued as the Spaniard crashed out, his fifth crash in six races, and in a lap to forget for the factory Speed Up squad, Di Giannantonio then took the car park route through Turn 14 and through went both Lüthi and Fernandez.

Bezzecchi, however, wasn’t throwing the towel in and just as we saw in Styria three weeks ago, the Italian was starting to chip away at Marini’s lead. Further back, Bastianini’s title chances flashed before his eyes as he pulled of a quite remarkable save at Turn 8. The front end folded and in true Marc Marquez style, the 22-year-old picked it up on his knee and held on to the podium place.

Suddenly drama struck and the fight was on with seven laps to go. Marini hit a false neutral into Turn 14, forcing him wide, and his eight-tenth advantage was gone. Bezzecchi swooped through, took the lead and it was role reversal at the front of his intermediate class scrap. A couple of laps later Marini hit back as he smoothly went past under the brakes into Turn 8., but Bezzecchi was having none of it, diving straight back past…

Four to go and Marini tried again through the opening corners but Bezzecchi hit straight back as the pair’s fight really started to heat up, Marini next getting the job done through the ultra-fast Turn 11. All of their squabbling was allowing Bastianini to suddenly creep into contention though, something team boss Pablo Nieto knew too well as he clambered over pit wall to point out the looming 33 to his riders.

Just two laps were remaining with a top three covered by 1.1 seconds, and it really was anyone’s game. Were we going to be treated to an incredible sprint finish? Marini had other ideas and he put together a perfect penultimate lap, before his cause was aided by Bezzecchi incredibly hitting a false neutral of his own at Turn 14. That saw Bastianini move to within four tenths of his compatriot, and it seemed Marini’s to lose.

The number 10 stood firm on the final lap and the victory was his, with teammate Bezzecchi just doing enough to fight off the charging Bastianini by less than a single tenth. That puts Marini19 points clear of Bastianini, with Bezzecchi a further ten back in third.

Vierge came across the line in fourth after having the best seat in Misano throughout the final laps, and Fernandez held off both Lüthi and Di Giannantonio to take the final top five place. They were ahead of arguably one of the rides of the day courtesy of Sam Lowes. The EG 0,0 Marc VDS rider will walk away from Misano with eight points despite starting from pitlane and will no doubt be delighted that the intermediate class is back in just seven days’ time. Completing the top ten were Aron Canet (Oceanica Aspar Team) and Joe Roberts (Tennor American Racing).

Victory went the way of Marini on a day to remember for Italy as three flags glistened on the Moto2™ podium in the San Marino sun . However, all three will be wary of an incredibly determined Brit who could be back with a vengeance next weekend… come back for more then!

Luca Marini: “This is a big one. I think my best race, because I wasn’t as fact as I expected, every time on track in the race it’s different and the track is slower, I couldn’t do it like in practice. But I tried to manage the gap with Bez until I hit a neutral, lost a second, Bez overtook me, we started to fight… but I was a bit faster so I could overtake him again. When I was at the front I pushed for the last three laps, I had something more for the end. This is great team work, and with my crew, the bike was perfect from the beginning. Now we enjoy this win, a party tonight but not with a lot of people – my house with my girlfriend and maybe some close friends! And then focus on the next one, because this year the first race I’m fast every time and can achieve a good result, but then in the second race at the track track I struggle a bit. The other guys make a big step and me, I stay the same on race pace. So we need to work a bit on this, but let’s enjoy this win and great job to Marco and to Bestia. It’s a great Championship this year with a lot of battles.”