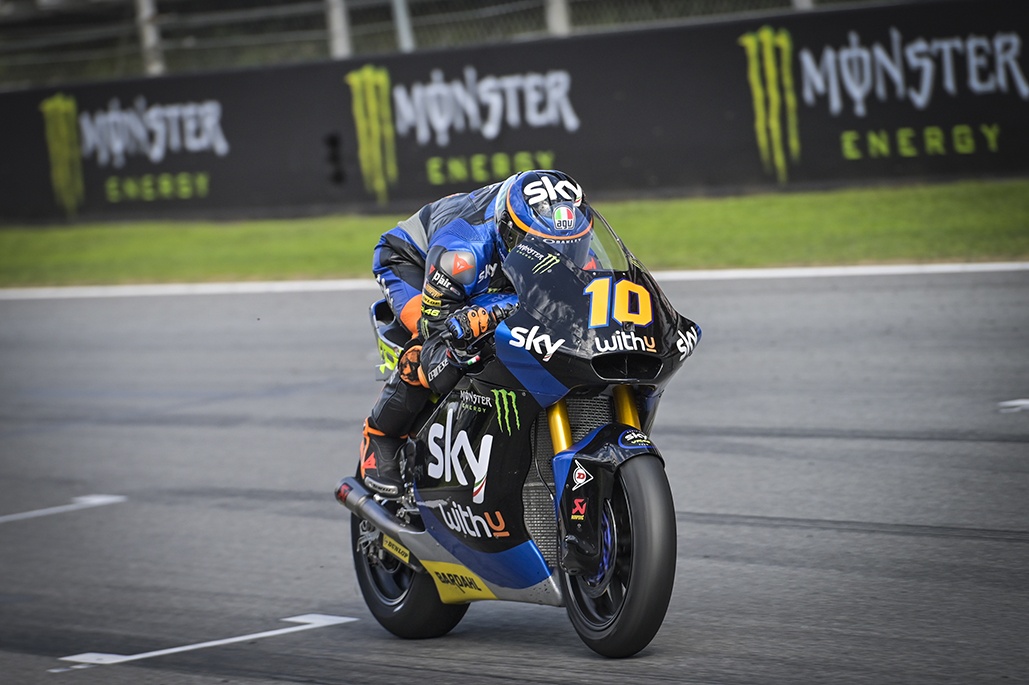 The Championship leader starts from the front, with closest rival Bastianini tenth on the grid as Navarro and Lowes complete the front row.

Another week, another lap record! Luca Marini (Sky Racing Team VR46) has done it again in the Gran Premi Monster Energy de Catalunya, putting in a 1:43.355 to set pole position and a new lap record at the track. He’s joined on the front row by Q1 graduate Jorge Navarro (HDR Heidrun Speed Up) and podium finisher last time out Sam Lowes (EG 0,0 Marc VDS). Enea Bastianini (Italtrans Racing Team), who’s only five points off Marini in the standings, starts down in tenth.

In Q1, it was Joe Roberts (Tennor American Racing) who went top, followed by Jake Dixon (Petronas Sprinta Racing), Navarro and Nicolo Bulega (Federal Oil Gresini Moto2) as they headed through – leaving one surprise in their wake in the form of Aron Canet (Inde Aspar Team Moto2), who missed out and starts P19 after also crashing on Saturday morning, rider ok.

Marini was quickest from the get go in Q2, with teammate Marco Bezzecchi going second in the early stages before Xavi Vierge (Petronas Sprinta Racing) and Lowes leapfrogged him to sit as Marini’s closest challengers. That soon changed, however, as Marini went quicker again and Bezzecchi following suit to take back second. Q1 graduate Dixon then moved up into third as Marini went even quicker, setting the fastest ever Moto2™ lap around the Circuit de Barcelona-Catalunya. His 1:43.355 moved him well clear of the competition, and as it turned out it would secure him pole.

Dixon was then setting red sectors and the British rider pipped Bezzecchi to P2, but the Brit was still 0.349 off Marini’s time. Another Q1 graduate in the form of Navarro then shot up into provisional second, cutting the gap to Marini down to a tenth and a half. Navarro’s teammate Fabio Di Giannantonio (HDR Heidrun Speed Up) and Lowes then interchanged P3 lap times to push Dixon down to P5, with Di Giannantonio forced to settle for P4.

That was pretty much that at the top. Marini was untouchable, with Navaaro in second and Lowes taking third from ‘Diggia’, leaving Dixon down in fifth. The Brit nevertheless claims his best-ever Moto2™ qualifying result for the second weekend in a row though – going one better than Misano. Bezzecchi will start on the second row alongside ‘Diggia’ and Dixon, the Italian forced to settle for sixth.

Joe Roberts spearheads Row 3 in P7 after coming through Q1, taking his first Saturday top 10 since his Czech GP pole position. After finishing second in FP3, rookie Marcos Ramirez makes it two Tennor American Racing machines on the third row as he took his best qualifying of 2020 to sit in P8. Xavi Vierge completes the third row.

Remy Gardner (Onexox TKKR SAG Team) completed the top 10 in Q2, but after crashing under yellow flags on Friday, the Australian faces a six-place grid penalty. What does that mean? It means Bastianini will move up a position into the top 10 on the grid – and every little helps for the Italian who faces a tough task to mix it with Marini on Sunday afternoon.

The stage is set for another Moto2™ classic, but don’t forget races on Sunday are taking place an hour later than normal. The Moto2™ riders will do battle in Barcelona at 13:20 local time (GMT+2).

Luca Marini: “I felt very good from the beginning of the weekend, it wasn’t easy and I didn’t expect it because it’s a very different situation to Misano, but the bike is still working well. So I don’t have so much rear grip but for everyone it’s the same so that’s great. I tried to manage the rear in practice because I want to understand how it will be in the race. In the quali I focused on being precise, and with a good lap and all sectors together. I think I did my job, and I’m very happy to start from pole because it will be important tomorrow, but I think Speed Up and Sam are strong here so it won’t be an easy race, but for today I’m happy and for the work I’ve done with my crew.”