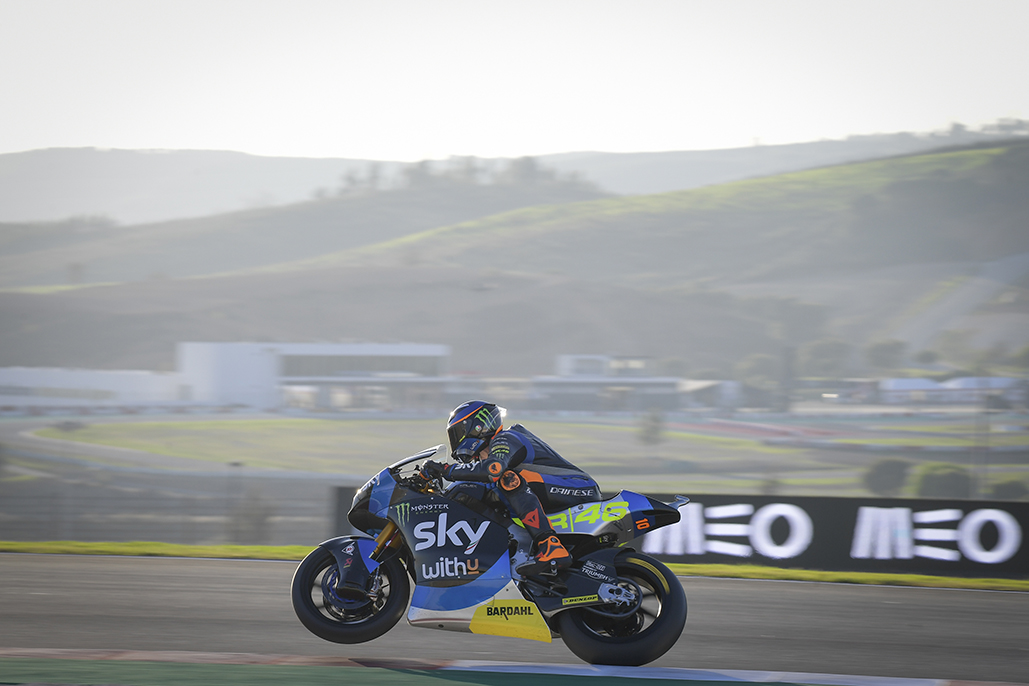 The top three in the standings make their mark on Day 1, with Bezzecchi in the top ten too.

FP1
Marcos Ramirez (Tennor American Racing) was quickest in FP1 with a 1:43.740; only five riders able to break the 1:44 barrier in the intermediate class’ first run out. Less than six hundredths separated the top three though, with Fabio Di Giannantonio (Beta Tools Speed Up) second and Marini starting the day in third.

Riders took their time in adapting to the circuit as Augusto Fernandez sat on P1 for the majority of the session, the EG 0,0 Marc VDS rider and Di Giannantonio the only men under the 1:45 bracket in the early stages.

However, with 15 minutes remaining the pace of the session picked up with the likes of Aron Canet (Pull&Bear Team Moto2) and Joe Roberts (Tennor American Racing) getting themselves into the top three. P1 then exchanged hands multiple times in the closing stages, with Marini taking it first before Remy Gardner (ONEXOX TKKR SAG Team) fought back with a flat 1:44. The other Championship contenders then got in on the fun as Lowes got into the top three, before Bezzecchi and Bastianiniboth temporarily sat in P1 with little over three minutes remaining.

Ramirez’s last flying lap put him in P1 as he took the chequered flag.

FP2
As FP2 revved into life, Jorge Martin’s (Red Bull KTM Ajo) session was brought to an abrupt end. His bike was spitting smoke on his out-lap and it was a disastrous start for the Spaniard, who ended up missing the whole session. Lowes was then the first to drop the pace as he went 0.012 seconds ahead of FP1 pacesetter Ramirez, before teammate Augusto Fernandez, Aron Canet (Pull&Bear Aspar Team Moto2) and Somkiat Chantra (Idemitsu Honda Team Asia) – the latter later a crasher in the session – proved the other riders in the top 10 to go faster than they did in FP1 almost straight away.

Marini then took to the top, and that’s where the Italian would remain after the shuffle. A herculean effort from Lowes saw him overhaul it before Marini hit back, but the Brit responded in kind. Bastianini then took P3, and three minutes left, the top four in the Championship sat 1-2-3-4…

It didn’t quite remain that way in the session or the combined timesheets – which were the same bar Martin missing FP2 and slotting into P23 overall – but not too far off. Marini improved once more to guarantee himself P1, with Lowes forced to settle for second but an incredibly impressive second. Baldassarri stole third late on and Gardner fourth, with Bastianini completing the top five.

That leaves Roberts and Martin as two key names looking for more, although as the field get more and more track time, it’s likely another roll of the dice will come on Saturday morning. Tune in for FP3 at 10:55 (GMT), before qualifying from 15:10.