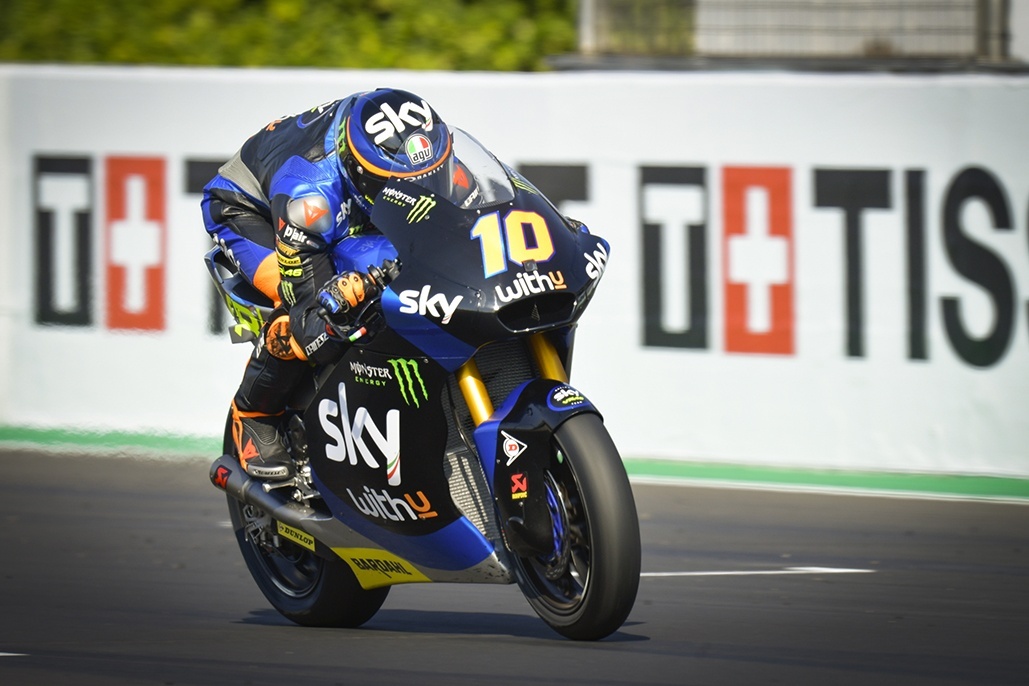 The Italian continues his reign but not by much, with Canet catapulting himself into second and only a tenth off.

FP1
In FP1, Enea Bastianini (Italtrans Racing Team) was top of the pile, 0.171 ahead of Tom Lüthi (Liqui Moly Intact GP) as the Swiss veteran put in an impressive session to get back nearer the front. Last week’s pole position setter, Sam Lowes (EG 0,0 Marc VDS), completed the top three as his Misano pace remained very much intact.

Hector Garzo (Pons HP 40) was another who impressed as he ended FP1 in fourth, just ahead of Nicolo Bulega (Federal Oil Gresini Moto2). Championship leader Marini began the day in sixth, 0.281 off the top.

FP2
In the afternoon, Marini hit back and set his fastest lap on a well-used tyre – having spent most the session on it – which may prove ominous to many. Canet was second and Schrötter third, with both making a significant move up the top ten in FP2. Lowes was fourth, with American Joe Roberts (Tennor American Racing) leaping up the timesheets to complete the top five.

Schrötter crashed in the afternoon although still took third, with the other faller proving San Marino GP podium finisher Marco Bezzecchi (Sky Racing Team VR46). It seemed a tougher first day at the track this time around for the Italian, and he crashed at Turn 6 in a highside.

On Friday it’s an FP2 top five on the combined timesheets as Marini leads Canet leads Schrötter, with Lowes and Roberts in fourth and fifth respectively. Bastianini slots into sixth by virtue of his FP1 best, ahead of Bezzecchi and Xavi Vierge (Petronas Sprinta Racing).

Lüthi ends Friday in ninth from his FP1 fastest, with the top ten completed by Jorge Navarro and his FP2 best. Currently, the final riders provisionally moving through to Q2 are Garzo, Bulega, Tetsuta Nagashima (Red Bull KTM Ajo) and Jake Dixon (Petronas Sprinta Racing). The first three by virtue of FP1, and Dixon after a huge step forward in the afternoon following some technical troubles in the morning.

That’s it from Day 1, with Saturday poised to deliver some more awesome track action for Moto2™. Tune in for FP3 in the morning, before qualifying starts from 15:10 (GMT +2).