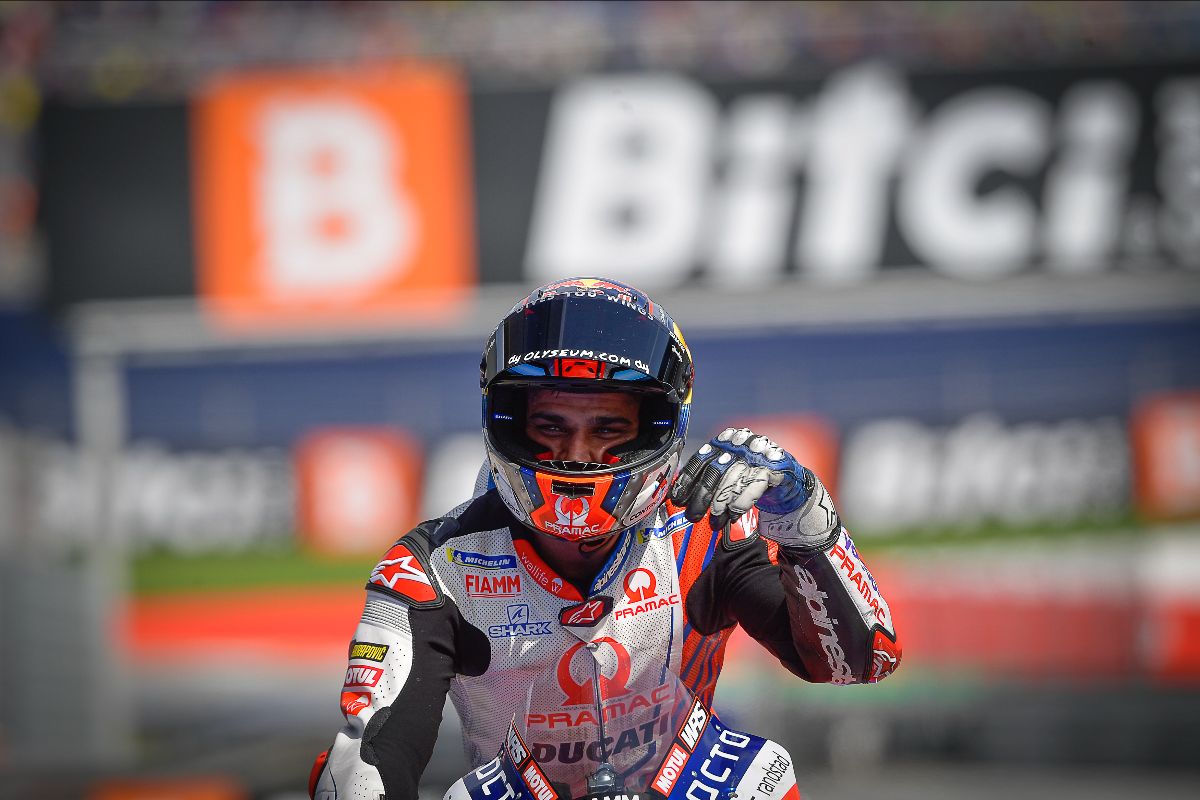 The rookie pips Quartararo to pole by hundredths, bouncing back in style from a trip through Q1.

Jorge Martin (Pramac Racing) has done it again! The rookie sensation has taken his third pole of the season and second in two Sundays as he heads the grid for the Bitci Motorrad Grand Prix von Österreich, setting another new all-time lap record around the Red Bull Ring to do it. Fabio Quartararo (Monster Energy Yamaha MotoGP) misses out by just 0.034 and held said record for about a minute before getting pipped to the post, with Francesco Bagnaia (Ducati Lenovo Team) completing the front row.

Q1
Q1 saw plenty of fast faces looking for a way through, including Martin, Red Bull KTM Factory Racing’s Miguel Oliveira and Alex Rins (Team Suzuki Ecstar). Martin was fastest from the off in the session, with a few tenths in hand after the first runs and Rins in P2.

The final push for a place in the top 12 and the chance to fight further up saw everyone come out swinging, but Martin moved the benchmark by another few hundredths first. Then red sectors started to appear across the board, but no one could keep it going throughout the lap except the rookie number 89. He improved his laptime to move through on top, joined by Oliveira as the Portuguese rider just pipped Rins to P2.

Q2
Martin got down to a 1:23.037 as the first real benchmark, but not long after that there was a new lap record. Quartararo was four tenths up and heading round the final corner, the Frenchman kept it nice and tidy to set a scorching 1:22.677 – the new fastest lap ever of the Red Bull Ring, knocking a couple of tenths off Zarco’s Friday fastest.

Bagnaia then started lighting up the timing screens, the Italian not yet having registered a valid lap either, but losing out in the final sectors saw him slot into third, just behind Martin. But the Italian wasn’t done and went for another shot at it, again up in the early stages but then losing out. He improved, but stayed third.

Marc Marquez (Repsol Honda Team) was up early and then lost over a second, Jack Miller (Ducati Lenovo Team) set a red first sector, and Bagnaia was on a roll too. But it came down to two…

Together on track, Zarco was ahead of Martin and the duo was pushing. But the Frenchman was losing bit by bit as Martin’s timing showed he was a tenth and a half up on the new lap record from Quartararo. Could be keep it going?

Zarco crossed the line with another good lap, enough for fourth, but behind him his teammate smashed it on Saturday once again. Another new lap record, and just 0.034 up on Quartararo’s, sees Martin regain his crown as fastest ever MotoGP™ rider around the Red Bull Ring with a 1:22.643. With that, the Spaniard takes his third pole of his rookie season.

Quartararo is forced to settle for second, although that’s one better than last weekend as he pips Bagnaia this time around. The number 63 completes the front row, however, and only missed out on a 1:22 by an apt 0.063.

The Grid
The same front row in a slightly different order heads the grid. Martin remains the poleman, with Quartararo second and Bagnaia third. Zarco heads up Row 2, with Marc Marquez putting in a solid Q2 to take fifth. Jack Miller completes the second row as he looks for some redemption after a crash last weekend.

Joan Mir (Team Suzuki Ecstar) is a little further back than the Styrian GP but takes a solid P7, with Aleix Espargaro (Aprilia Racing Team Gresini) and Miguel Oliveira alongside on the third row.

Brad Binder completes the top ten after the South African had a run off on his final attempt, but that is six places further forward than where he started in Styria… and then, he charged up to fourth place. Pol Espargaro (Repsol Honda Team) had a muted qualifying and lines up 11th, similarly Takaaki Nakagami (LCR Honda Idemitsu) in 12th.

That’s Saturday done, now make sure to tune in for the Austrian GP at 14:00 (GMT +2) as MotoGP™ takes on the Red Bull Ring once again! Can Martin make it two from two?

Jorge Martin: “I always work well under pressure and today was one of those days, after crashing in FP3 I wasn’t confident, I don’t know why but this morning, the setup… I was missing confidence in braking and acceleration, but we tried things in FP4 and I was really happy. Then in Q1 I was a bit nervous because it’s always difficult to go to Q2, even if I was confident, in Q1 everyone’s fast! (…)

“Then the first stint in Q2 was good but I had a problem with the front brake, it was too hot because of Q1 and I had a lot of vibrations on the second stint too. But I could get this pole position and it’s unbelievable, when I was up three tenths in the first sector, I was impressed! I was thinking ‘oh I can get pole’! but then I made a mistake at the final corner, and I had some doubts… but yeah, when I crossed the finish line I was impressed. I’m living a dream, I love the bike and love the team, we’re in a great moment even with two crashes and some pain in my knee from the last crash, but happy for the work done and hope we can battle for the podium tomorrow.”