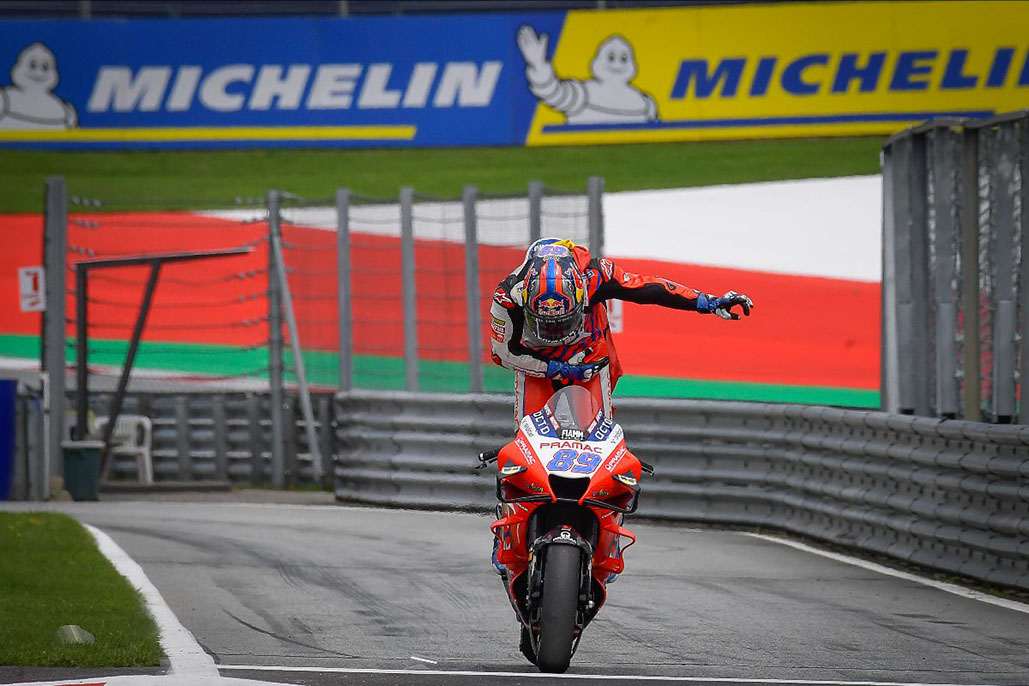 The wait is over for Pramac Racing as the rookie puts in a stunner for his first premier class win and the team’s first with Ducati.

Ladies and gentlemen, there’s a new MotoGP™ winner in town! From injury to pole position to top step of the podium, comeback stories don’t get much better than Jorge Martin’s (Pramac Racing) first weekend back from the summer break. The Spaniard broke the lap record for pole on Saturday and then put in an imperious performance to outpace reigning Champion Joan Mir (Team Suzuki Ecstar) on Sunday, taking his first premier class win and becoming the first Independent Team rider on a Ducati to win a MotoGP™ race. And for Pramac Racing, the wait is over as that victory with Ducati finally comes their way.

Mir took second and his best result of the season so far, with Championship leader Fabio Quartararo (Monster Energy Yamaha MotoGP) completing the rostrum to do some impressive damage control in the standings at a tougher venue for Yamaha.

The first race start of two saw Francesco Bagnaia (Ducati Lenovo Team) take the holeshot as Mir and Martin slotted in behind, but it wasn’t long before a huge moment of drama would interrupt proceedings. A couple of laps later, MotoGP™ Legend and wildcard Dani Pedrosa (Red Bull KTM Factory Racing) slid off out of Turn 3 – and his bike was then struck by Lorenzo Savadori (Aprilia Racing Team Gresini). Both riders were up and ok after the crash, but the bikes burst into flames and the Red Flag came out immediately – leaving a clean-up job to do.

Savadori headed for a check up and was found to have fractured his right malleolis, therefore out of the restart – but Pedrosa was able to get back out. After a considerable wait for the track to get cleaned and race ready, a new distance of 27 laps was set and the grid lined up again.

But again, more drama hit – this time for Maverick Viñales (Monster Energy Yamaha MotoGP) as the number 12 couldn’t get away on the Warm Up lap and was forced into pitlane. That left a gap on the grid, and the lights then finally went out for the second time.

This time around, Martin took the holeshot but Jack Miller (Ducati Lenovo Team) struck at Turn 3, with Mir slotted into third and a gap back behind the trio already. Quartararo was on the chase, with another – after the same in the first start – moment between Marc Marquez (Repsol Honda Team) and Aleix Espargaro (Aprilia Racing Team Gresini) slightly shuffling the pack just behind as El Diablo took the inside line and the room ran out.

At the front though, Miller led Martin led Mir, but Quartararo was homing in – and closest Championship challenger Zarco was the last man going with the front group. Bagnaia, meanwhile, had dropped behind both LCR Honda Castrol’s Alex Marquez and LCR Honda Idemitsu’s Takaaki Nakagami. Another rider of note was Brad Binder (Red Bull KTM Factory Racing), as the South African started to ignite his Sunday charge, up into ninth and looking like little would stop further progress.

Up ahead, by the braking zone for Turn 3, Martin was into the lead and past Miller though, and Quartararo and Zarco switched and switched back. Mir then got past Miller to get on the chase for victory, and a gap started to open up behind the leading duo. By 21 to go, Quartararo moved past the Australian too, and Miller responded at Turn 4 before El Diablo elbowed his way back through. With that, the gap to the lead duo only grew…

Quartararo managed to hold on in third, but then more drama hit behind him to assure it. Martin and Mir had disappeared in the distance and Miller was starting to put the pressure on the number 20 in the fight for the podium, but disaster hit for the Australian with 10 laps to go. Suddenly sliding out at Turn 7, his rostrum hopes were over and the Yamaha ahead was released into some solid breathing space.

From there on out, the key question became: Martin or Mir? But as the laps ticked down, the answer became clearer. The number 89 was edging away, and then a mistake from Mir at Turn 3 just took the gap over a second… and that was that. If Martin could keep it clean, his first premier class win was there for the taking.

Keep it clean he did. Mir did too from there on out, but it wasn’t quite enough as the Pramac Racing rider in the lead just pounded on. Over the line, the comeback fairytale was complete and Martin took the flag with a second and a half in hand, making some incredible history with an emotional victory, from a pole position lap record no less. Mir was forced to settle for second but was right back in the hunt – and moved up to third in the standings – with Quartararo a distant but valuable third as Ducati territory didn’t play out that way for his closest challengers in the points.

Fourth place, meanwhile, looked set for much of the race. But Brad Binder had other ideas, and the South African absolutely smashed the final lap. Beginning it behind both Nakagami and Zarco, the KTM rider wanted more than sixth and that’s exactly what he got. Dispatching the Japanese rider AND the Frenchman in just one lap, the number 33 took fourth and the honour of top KTM on home turf. Sunday rider can also be a compliment!

Nakagami then snatched fifth and Zarco was forced to settle for sixth, losing out some ground to Quartararo. Alex Rins slotted into seventh, with Marc Marquez able to salvage eighth after some dramas for the number 93 on Sunday. Alex Marquez faded in the latter stages to ninth but still took a valuable top ten… as did Pedrosa, in the end. Bagnaia was given a time penalty for not taking a Long Lap – he exceeded track limits – and that puts the number 26 back into the top ten in Grand Prix racing. An impressive achievement for any rider, but especially more than two years after retirement.

So that’s all she wrote for Styria… but not for the Red Bull Ring. The stunning venue welcomes MotoGP™ back for more next weekend for the Austrian Grand Prix, and there’ll be a new premier class winner lining up: Jorge Martin. Will the deck shuffle again or can he go back to back? We’ll start to see some answers on Friday!

Jorge Martin: “I can’t believe it, for sure I think I still don’t believe it so I’m still not so excited! What I did today was amazing, I kept a really constant pace throughout the race, in the same tenth, and I was super focused. Even if I made some mistakes, my target was to win the race. Joan was impressive today too, he was behind me almost all the race but in the last laps I tried a bit more to brake a bit harder even if the front tyre was destroyed, and I could take a gap for the lead. On the last laps I was thinking a lot of things, about everything and everyone who helped me to arrive here and that’s why I was a bit worse in the last laps! But I had the gap to manage. Thanks to all my family, this is one big step towards my dream of being World Champion. Today is one big step, we’re a bit closer and I want to dedicate it to all the people who’ve helped me and also to my grandfather who is still fighting, this is for you. I hope to keep this line for next weekend, it’ll be more difficult but I think we still have some margin to work and we’ll try for the win again.”