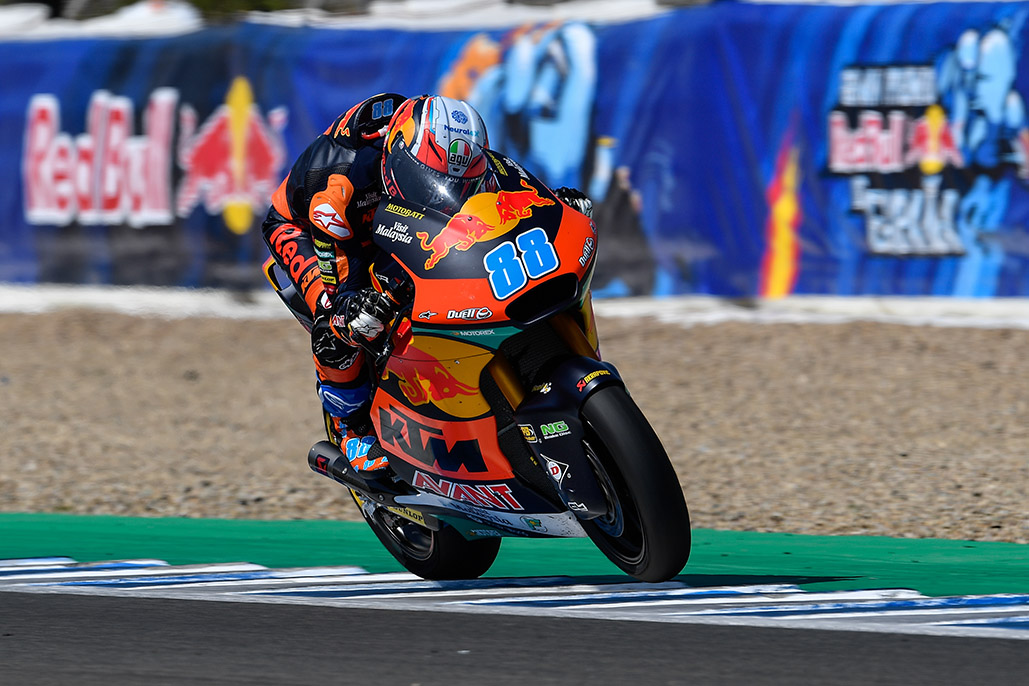 The Spaniard proves untouchable, ahead of Navarro and a return to the front row for Lowes.

Jorge Martin (Red Bull KTM Ajo) stole the show in Moto2™ qualifying at the Gran Premio Red Bull de España, the Spaniard setting a 1:47.384 on his second flying lap to eventually beat Jorge Navarro (HDR Heidrun Speed Up) to pole position by 0.181 seconds. On his return from injury, Sam Lowes (EG 0,0 Marc VDS) claims P3 and a front row start in Jerez – a venue the Brit has ruled before.

Martin was straight out in Q2 to almost immediately got down to the low 1:41s, with that eventual pole position time coming on only his second flying lap. It wasn’t such a good start for Q1 graduate Fabio Di Giannantonio (HDR Heidrun Speed Up), however, as the Italian tucked the front at Turn 2, with his bike then catching fire in the gravel. Fellow Q1 graduates Xavi Vierge (Petronas Sprinta Racing), Hafizh Syahrin (Inde Aspar Team Moto2) and Joe Roberts (Tennor American Racing) soldiered on.

Meanwhile at the top, Martin stood firm, with Lowes able to slot into second but still a number of tenths in arrears. The Sky Racing Team VR46 bikes of Luca Marini and Marco Bezzecchi were working in tandem to try and reel in Martin’s advantage too, but despite the duo continually slamming in personal bests, that three-tenth gap couldn’t be eaten into. It looked like Martin’s time was safe with the temperatures rising all the time, but Navarro was then looking good on a personal best. The polesitter from 2019 couldn’t quite repeat his feat in 2020, but he did displace Lowes from P2 to go 0.181 off Martin and split the two men at the top.

Lowes improved his time although his position remained the same, and P3 for the number 22 is a great way to kick off his 2020 campaign after missing the Qatar GP. Can he challenge for the win on Sunday? And speaking of, the Sky VR46 duo have looked stellar all weekend. Friday pacesetter Marini will lead teammate Bezzecchi off the line in P4 and P5, with rookie Aron Canet (Inde Aspar Team Moto2) sitting just behind the two Italians on Row 2 after he moved up the timesheets on Saturday.

Jerez lap record holder Marcel Schrötter (Liqui Moly Intact GP) couldn’t repeat his form from FP3 and will launch from the front the third row, although the German rider was just 0.019 off the second. Championship leader Tetsuta Nagashima (Red Bull KTM Ajo), meanwhile, finished half a second off teammate Martin and will aim to keep his advantage in the overall standings from P8. Vierge came through Q1 to take ninth, just ahead of 2018 and 2019 Spanish GP race winner Lorenzo Baldassarri (FlexBox HP 40), who rounds out the top ten. Can the Italian repeat his feat from the previous two years?

Martin was untouchable in qualifying, but the race is a different story and the grid behind him packed with challengers looking to strike back on Sunday. Who can handle the heat best at 12:20 local time (GMT+2)? Tune in to find out!

Jorge Martin: “This is another step in my career! I’ve been waiting for this moment for a year and a half. Today I didn’t think it was my day because in the warm temperatures yesterday it was difficult, but we did an incredible job and the team worked so well, with such a stable bike and lots of confidence in the front. I’m really happy and I think tomorrow in the cooler temperatures I will be faster and hopefully i I can battle for the race.”