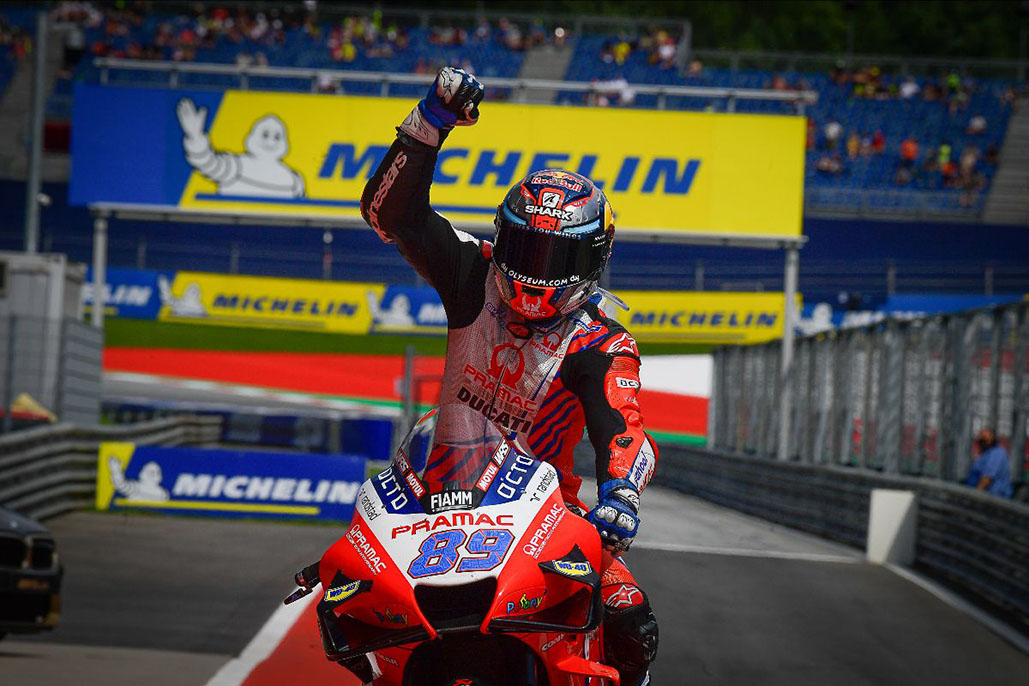 The rookie denies Bagnaia and Quartararo, with less than a tenth covering the top three in Styria.

Jorge Martin (Pramac Racing) may be a MotoGP™ rookie, but the Spaniard now already has two premier class pole positions to his name. The first was in only his second MotoGP™ appearance, in Doha, and led to his first podium. After some serious injury struggles since then, the Spaniard said he’s reset, reloaded and ready to fight it out again at the Red Bull Ring… and beating Marc Marquez’ (Repsol Honda Team) previous lap record on Saturday is certainly quite a statement. Martin’s 1:22.994 makes him the first rider below the 1:23 barrier at the Styrian venue, and it was enough to deny Francesco Bagnaia (Ducati Lenovo Team) by 0.044 and Fabio Quartararo (Monster Energy Yamaha MotoGP) by just 0.081 as less than a tenth covers the top three for the Michelin® Grand Prix of Styria.

Q1
Q1 saw the home heroes – this weekend comprising five KTMs – looking for a way through after a more difficult start to their Styrian GP, as well as the likes of Alex Rins (Team Suzuki Ecstar).

Miguel Oliveira (Red Bull KTM Factory Racing), despite his Friday highside that’s left him riding through the pain barrier, got the job done under pressure. He spent much of the session leading the way before getting pipped to P1 by Alex Marquez (LCR Honda Castrol), but the two moved through as Rins was left in P13 on the grid.

Wildcard and MotoGP™ Legend Dani Pedrosa (Red Bull KTM Factory Racing) continued to impress on Saturday. He didn’t make it through but will line up 14th as the second Austrian machine, despite not having raced since 2018.

Q2
Once Q2 was underway, Quartararo was looking like the man to beat as the Frenchman led the way after the first runs with a 1:23.075. Could Yamaha take a pole position at the Red Bull Ring once again? El Diablo looked strong, but as the final push began, Bagnaia came out the blocks stronger as most remained in pitlane.

The Italian took over on top with a 1:23.038, incredibly close to Marc Marquez’ fastest ever lap of the venue, but the showstopper came not from the factory man but from Martin. The Spaniard stunned to put in the first sub 1:23 lap of the Red Bull Ring, but Quartararo was on a fast one…

Unfortunately for the Frenchman, Turn 9 was more bucking bronco than bull by the horns, and the Championship leader touched the green on the outside of track limits – cancelling his lap and leaving him a best of third on the grid. Bagnaia then also had some red sectors, but he couldn’t topple Martin either… and then drama for Marc Marquez muted the end of the session. A lowside at Turn 3 was no harm done for the eight-time World Champion, but it did put paid to any improvement after he’d been up too.

The Grid
The incredibly close top three sees Martin, Bagnaia and Quartararo on the front row split by less than a tenth. The rider on pole is a rookie, but Bagnaia’s performance also steals the headlines as it’s his first MotoGP™ weekend at the Red Bull Ring after missing last year with injury.

Behind Quartararo, there’s a more comfortable 0.225 back to Jack Miller (Ducati Lenovo Team) in fourth, although the Australian took two podiums at the venue last year and will likely be an immediate threat. Likewise reigning Champion Joan Mir (Team Suzuki Ecstar) as he had a great qualifying at a track that’s seen him enjoy considerable success, taking P5 this time. It’s his best position of the season and his best since the 2020 Europe GP… which he went on to win. Johann Zarco (Pramac Racing), second in the standings, completes the second row and will be looking to slice forward early.

Aleix Espargaro (Aprilia Racing Team Gresini) heads up Row 3, with Marc Marquez forced to settle for eighth and his first time off the front two rows at the Red Bull Ring. Also off-form was Maverick Viñales (Monster Energy Yamaha MotoGP), who took a pole last year in Austria but completes Row 3 for the 2021 Styrian GP after finding a few engine gremlins in Q2.

Takaaki Nakagami (LCR Honda Idemitsu) completes the top ten, meaning the two Q1-graduates didn’t make big inroads in the second qualifying session. Alex Marquez will start 11th, his best since the Teruel GP last year, with Oliveira looking to move forward from 12th as he rides through the pain barrier.

That’s it from Saturday at the Styrian GP, with a rookie on pole, a venue first timer right behind him and the Championship leader looking play his cards right at what’s traditionally been a tougher venue for Yamaha. With Miller and Mir lurking… KTM wanting to push… Zarco needing a points haul… and a million more stories up and down the grid. Tune in for the Styrian GP at 14:00 (GMT +2) as MotoGP™ takes the Red Bull Ring by the horns.

Jorge Martin: “It wasn’t a perfect lap, I started well in the first sector then in the second corner I blocked the front going uphill, but then I thought the first sector was good so tried to stop the best I could. I kept pushing and saw I was coming in hot, then I made a mistake with the gear at Turns 4 and 5… but anyway, in T3 I was improving and in the last two corners I tried to not go in the green because today with the wind that was difficult… and when I finished I saw 22.9 and I thought ‘woah that’s a good time’… but on the TV I saw maybe Quartararo improved, I don’t know, but maybe touched the green? When I saw I was on pole I was amazed. I want to dedicate it to my grandfather who is in hospital battling a lot, but… yeah I’m really happy, the points are tomorrow but I’ll try and battle for the podium.”