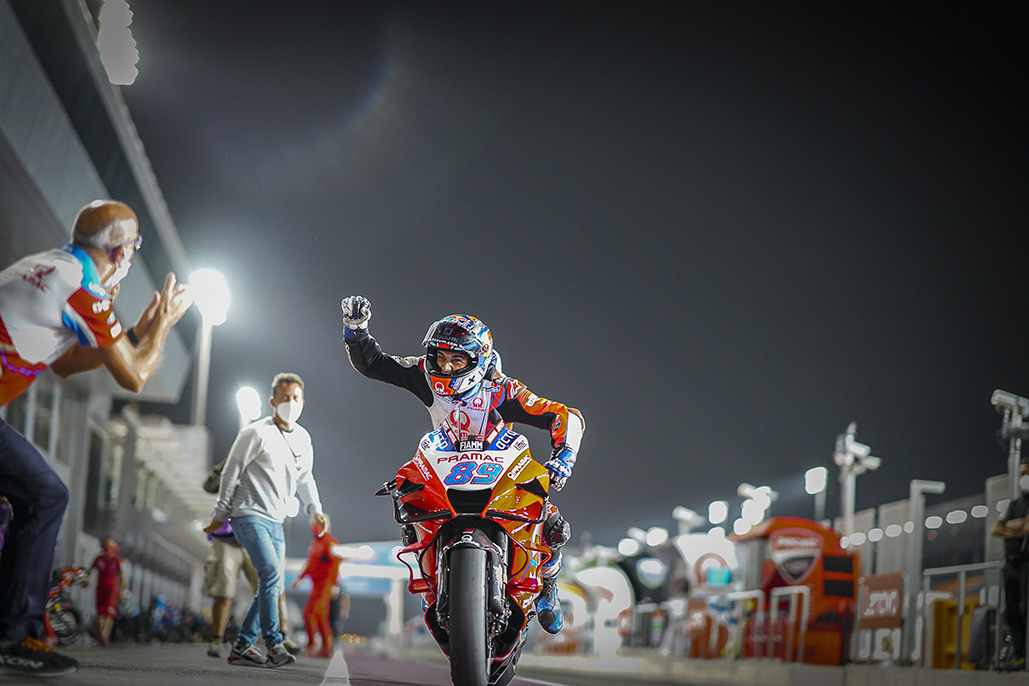 The rookie pulls out some magic on Saturday to take his first premier class pole position, ahead of Zarco and Viñales

Jorge Martin (Pramac Racing) achieved something special on Saturday at the TISSOT Grand Prix of Doha. After stealing the headlines early last Sunday with his stunning start, this time around it was a stunning qualifying session as the Spaniard took his first ever premier class pole position. He joins an exclusive club in doing so for only his second MotoGP™ race, with the other members comprising only Marc Marquez (Repsol Honda Team) and MotoGP™ Legend Casey Stoner, so the Pramac Racing rookie is in some fast company. Martin also has a tenth and a half in hand over teammate Johann Zarco as Pramac Racing made it a 1-2 on the grid for the Doha GP, with Maverick Viñales (Monster Energy Yamaha MotoGP) taking third – as he did last week on his way to the win…

On a windy day in Doha, Q1 saw some big names fighting to move through, including – once again – reigning MotoGP™ World Champion Joan Mir (Team Suzuki Ecstar). But Mir got the job done and with a more clinical show of speed this time around, topping the session to head through alongside Miguel Oliveira (Red Bull KTM Factory Racing). And so, the time to fight it out for pole was nigh.

As Q2 began, it was a familiar name making his presence felt. Martin put in a 1:53.892 straight out the traps to impress early, before Franco Morbidelli (Petronas Yamaha SRT) briefly deposed him. Shadowing Mir, however, Martin hit back quick with a 1:53.597 as Fabio Quartararo (Monster Energy Yamaha MotoGP) slotted himself into P2, just 0.017s behind Martin’s early benchmark.

After the first couple of flying laps, Martin, Quartararo and Aleix Espargaro (Aprilia Racing Team Gresini) was the provisional front row, with Morbidelli and the Ducati Lenovo Team duo of Francesco Bagnaia and Jack Miller on the second row with just over five minutes remaining. World Championship leader and Qatar GP winner Viñales was a whole nine tenths off in P9 – just behind Mir, who was down in P8. But soon the field rumbled back out for their second runs, and it was Viñales first on a mission.

Despite a couple of moments for the number 12, he shot from P9 to P1 with under two minutes to go and it was clear there was more in the locker. Sure enough, Viñales was over a quarter of a second up on his next flying lap. He then nailed Sector 2, nailed Sector 3 and taking the chequered flag, the Qatar GP winner extended his advantage to 0.330s.

Attention then turned to Martin, however, as the rookie was up by 0.015s in Sector 2. It was his final shot at it too, and he seemed the last rider on the roll needed to depose Viñales. In the final sector though, Zarco suddenly gained over two tenths to snatch provisional pole by an absolute whisker – 0.004s – but Martin wasn’t done yet. Out on his own without a tow, in classic Martin style, the new kid on the MotoGP™ block stormed across the line and did it. A tenth and a half clear, it was provisional pole with only Miller and Quartararo in the hunt. Could either spoil the party? Not quite. Firing their way to the chequered flag, neither worried the front row although both improved their times to grab P4 and P5 respectively.

A little history is therefore made in Doha as the ‘Martinator’ shows us how it’s done, with Zarco making it Saturday Night Fever for Pramac Racing in a 1-2 for the team. Viñales once again lines up P3 at Losail, and he’ll be looking to repeat his season opening feat – just maybe this time without the Ducati armada swamping everyone at the start.

Spearheading Row 2 is Miller, who will have wanted more but already proved how quickly he can make up that ground last week. The Australian also suffered a wobble in Q2, so a Row 2 start is a job well done. Quartararo’s fifth place was less than the Frenchman would have expected, but it’s another solid session for the number 20 to get back in the fight at the front. Sixth was another rider who would have wanted a little more after taking pole last week: Pecco Bagnaia. He’ll want to get the most from Ducati’s stellar starts and move up from there.

Leading the third row is Aleix Espargaro after another fantastic performance. With the Yamahas and Ducatis looking strong in Qatar, starting P7 – one place higher than last week – is yet another job well done for the Noale factory. Joining the Aprilia rider on Row 3, meanwhile, are both Team Suzuki Ecstar riders: Alex Rins sits 0.040s ahead of teammate Mir as the GSX-RR duo finish 0.6s shy from pole position. Judging by their progress last weekend on race day, there’s plenty to come from the Hamamatsu factory.

Rounding out the top 10 is Morbidelli, the Italian just 0.009s from the third row, with leading Honda rider Stefan Bradl (Repsol Honda Team) and fastest KTM Oliveira completing the Q2 graduates in P11 and P12 respectively. So where’s Valentino Rossi (Petronas Yamaha SRT)? P21 after one of the Doctor’s worst days at the office, so he’ll be looking for a lot more on Sunday.

That’s it from a history-making qualifying, and if Martin gets anything like the start he did last Sunday, then he’ll be into Turn 1 with a couple of hours in hand. He says he’s aiming for the top six though, whereas Zarco is very definitely aiming for the win from second. With Viñales exactly where he was last week though, will history repeat itself?

Jorge Martin: “It’s difficult to describe my feelings. On the first run I was behind Mir and I felt super confident, I was catching him so fast and I thought, ‘ok I need to be behind a faster bike’. I was hoping to be behind Pecco but he wasn’t pushing a lot so I thought, ‘ok it’s my time to push, time to demonstrate who I am’. And for sure I didn’t expect to get pole! I expected to be top four, top five, and when I finished the lap and I was up there in first.. it’s unbelievable. I want to thank my family and my team, they’re working great and we’re a family in in the box after just a month. This is so great! Tomorrow is another day to learn, because for sure it’s not my day to win, but if we can fight for the top six it would be great and I’d be super happy.”