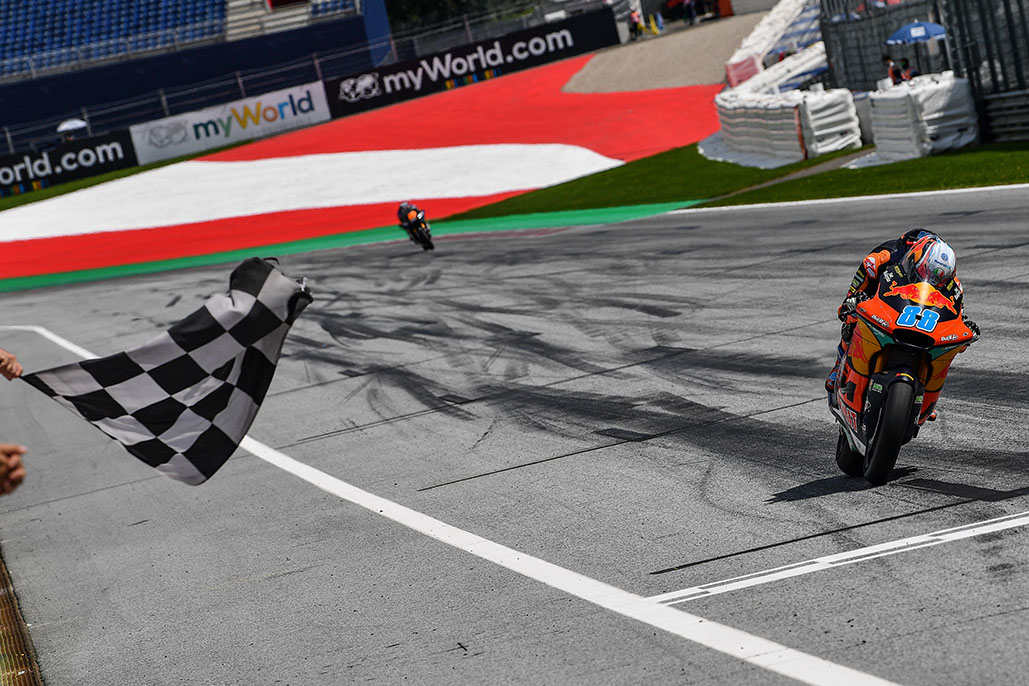 After a Red Flag and restart, the Spaniard nevertheless was able to stamp some authority on Austria, taking his first intermediate class win ahead of Marini and Schrötter.

After a dramatic crash, Red Flag and restart, Jorge Martin (Red Bull KTM Ajo) took a commanding first Moto2™ victory in the myWorld Motorrad Grand Prix von Österreich, and after proving the man to beat on the initial start and the restart. Luca Marini (Sky Racing Yeam VR46) tried to go with the Spaniard but was forced to settle for second, thereby, however, taking over in the Championship lead, with Marcel Schrötter (Liqui Moly Intact GP) completing the podium.

The incident that brought out the Red Flag was a highside for former points leader Enea Bastianini (Italtrans Racing Team), who was in fifth place on Lap 5 of the first start when he highsided out of Turn 1, leaving his bike stranded in the middle of the track. In a real heart-in-mouth moment, Moto2™ riders swerved left and right to avoid it before Hafizh Syahrin (Inde Aspar Team), unsighted sitting behind another rider, was left with nowhere to go and hit the machine.

Both Edgar Pons (Federal Oil Gresini Moto2) and Andi Izdihar (Idemitsu Honda Team Asia) were also caught up in the crash and were fortunately OK and walking away. Syahrin was first taken to the Medical Centre at the track where no fractures were found in initial checks, before the Malaysian was taken to hospital for CT scans and a comprehensive examination. He is ok, but was ruled “unfit” for a pelvic contusion as per official terminology.

On the restart, Martin took off like a shot from pole – he’d been leading when the Red Flag went out – with Marini making good use of a front row start this time around to settle into second. Again, Schrötter and Marco Bezzecchi (Sky Racing Team VR46) were in contention in third and fourth, although the Italian then tried a move and headed extremely wide at Turn 3. Original poleman Remy Gardner (ONEXOX TKKR SAG Team) was the ultimate opportunist and squeezed through on both in the aftermath, moving up to third but that now some distance behind the two leaders.

Martin and Marini were a second clear of the chasers at the end of the second lap, and Bezzecchi then made the same mistake again just one lap later and dropped right out podium contention as a result. Former World Championship leader Tetsuta Nagashima (Red Bull KTM Ajo) then crashed out at Turn 1 at the start of lap 4 as his title aspirations took another huge blow, joining Jorge Navarro (Beta Tools Speed Up) on the sidelines after the Spaniard had crashed earlier.

With ten to go of the 13-lap sprint, Marini was looking ominous behind former Moto3™ World Champion Martin. And behind them, the podium fight suddenly took a big twist as Gardner tucked the front into Turn 1, promoting Schrötter to third as a consequence and the German left with a comfort buffer of over one and a half seconds to Sam Lowes (EG 0,0 Marc VDS) in fourth. The Brit didn’t hold that position for long though, with Petronas Sprinta Racing’s Xavi Vierge diving past, and the pair had company from resilient rookie Aron Canet (Inde Aspar Team) too as he put himself in contention for another top five finish. The quartet was completed by the recovering Bezzecchi and they certainly didn’t assist their podium chances as the melee continued for the next couple of laps.

A near highside for Lowes then dropped him to sixth as that battle continued, but at the front Martin had pulled the pin. Over a second clear of Marini after the Italian’s pressure failed to pay off, it looked his to lose and sure enough, the Spaniard cruised to the line for his first Moto2™ win, although the reality was far from as easy at it looked. Marini took second and the points lead given Bastianini scoring a 0, with Schrötter holding steady in third for his first podium since the 2019 German GP.

The fight behind remained absolutely raging however, with Lowes vs Vierge vs Bezzecchi lighting it up. The Briton went defensive into Turn 3 and consequently sacrificed all of his drive down the back straight, and then on the final lap, Bezzecchi got his elbows out down the back straight in an attempt to get past Lowes. The squabbling didn’t halt Lowes’ progress in the final half a lap though, and he was able to pounce on a late Vierge mistake to take fourth, ahead of both the Spaniard and Bezzecchi, who finished in that order. Liqui Moly Intact GP’s Tom Lüthi got the better of Augusto Fernandez (EG 0,0 Marc VDS) in a fierce fight for seventh, before the top ten was completed by Canet and podium finisher last time out, Tennor American Racing’s Joe Roberts, in a solid ride for the American.

That’s a wrap for the intermediate class in the Austrian GP if not Austria, with Marini in the driving seat now and Bastianini looking to bounce back. Tune in for more next weekend, but more than anything, we wish Hafizh Syahrin a speedy recovery.

Jorge Martin: “It was difficult, in the first race I was feeling better and had a gap after two or three laps, I was consistent with a good feeling but in the second race I was struggling a bit more with the front end. At the beginning it was difficult to pull away, Luca was as fast as me but after four or five laps I kept pushing and I could control the race. I’m happy to be here, but we’ll work hard for next weekend because for sure we need to improve some points, and everyone will improve.”