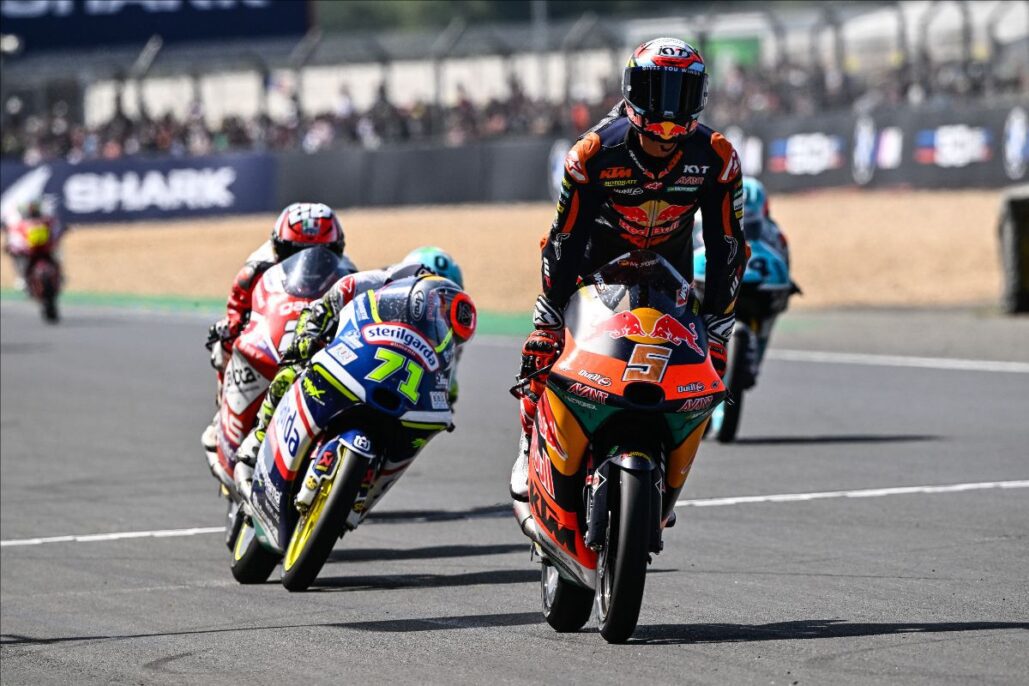 The Red Bull KTM Ajo rider takes a fourth podium in a row and another victory, fending off Sasaki on the last lap.

In typical barnstorming Moto3™ fashion, fans were out of their seats for a grandstand finish as a restarted race went down to the wire at the SHARK Grand Prix de France. Red Bull KTM Ajo’s Jaume Masia earned victory after a thrilling final corner move past Ayumu Sasaki (Sterilgarda Husqvarna Max) while Izan Guevara (Gaviota GASGAS Aspar Team) stole the final podium place with another dramatic final corner past poleman Dennis Foggia (Leopard Racing). It’s the first time Masia has taken four podiums in a row and it moves him up to second in the standings, 17 off leader Sergio Garcia (Gaviota GASGAS Aspar Team).

The threat of rain loomed large over Le Mans on Sunday but initially, Diogo Moreira (MT Helmets – MSI) got a brilliant launch from the line to take the holeshot going into the Dunlop Curve, but the Red Flag soon came out as rain hit the final sector. There had been seven different fallers, including GASGAS Aspar duo Garcia and Guevara, Sasaki, Andrea Migno (Rivacold Snipers Team) and Riccardo Rossi (SI58 Squadra Corse), but riders all ok and all able to make the restart.

With a new race distance of 14 laps set, it was always going to be a tight affair with the sun shining again, and so it proved. In a carbon copy of the first race start, Moreira managed to push himself into the lead from the second row while a superb effort from Championship leader Garcia saw him move up into the podium places behind then-closest challenger Foggia. Behind them, there was lots of chopping and changing as Tatsuki Suzuki (Leopard Racing) battled with Migno and Deniz Öncü (Red Bull KTM Tech3) throughout the first lap.

The race began to settle somewhat by the time the third lap rolled around, while Masia was finding his groove, picking off Suzuki at Garage Vert before getting the better of Foggia on the next lap at the Turn 3 chicane. The Italian tried to return the favour one lap later, but the Red Bull KTM Ajo rider fended him off. The race had lost Scott Ogden by this stage, with the VisionTrack rookie crashing out at La Chappelle, rider ok.

Behind Masia, Garcia had moved up to second after getting past the Leopard Hondas, while Öncü in P4 had entered the podium conversation. All the chopping and changing brought the leader of the second group, Sasaki, into contention too.

Back at the front, Foggia pushed himself back into second at the expense of Garcia. The GASGAS man tried to respond into the chicane, but it went awry and he was forced wide, costing him his drive out of the corner and dropping him to sixth overall. That gave Masia a couple tenths of breathing space out front, but it didn’t last long as he was soon reeled in by Foggia and Sasaki at S Bleu with just over three laps to go.

Coming into the endgame, Foggia led Sasaki ahead of Masia with Suzuki, Garcia and Guevara just behind. However, a move at Garage Vert returned Masia to P2. Coming over the line for the penultimate time, it was anybody’s race. The Dunlop Chicane is always a popular overtaking spot, and Masia lined up a successful attempt for the lead.

La Musee is another hot spot for overtaking, and that’s where Sasaki picked off Foggia, relegating the poleman to third. Having bided his time all race, the Japanese rider looked like he would steal the win with just two corners to go, taking the lead on the flick back left at S Bleu. The drama was still far from over, with Masia producing a sensational last corner lunge up the inside to take the win, while Guevara had done something similar to Foggia to deny the pre-season Championship favourite a podium.

Behind that podium shuffle, Suzuki finished fifth ahead of Carlos Tatay (CFMoto Racing Pruestel GP), with Garcia recording a P7 finish. Ryusei Yamanaka (MT Helmets – MSI) ended the day eighth, ahead of Öncü with Migno rounding out the top 10.

That’s a wrap at Le Mans, now the field heads for Mugello and a very different challenge. Join us again in two weeks for more!

Jaume Masia: “It’s amazing, no? It’s incredible, I don’t know what is happening, honestly. I’m enjoying it a lot. It was not easy to manage the situation after the rain, but it’s always amazing to be here. I just want to say thanks. We are really, really strong, I feel really, really good. Maybe we are not the fastest, but we can manage really well. Today, Le Mans repaid me for what happened last year, when I broke my wrist here. So, victory and the first row in qualifying is amazing. I really want to come back stronger, I want to go to Mugello because I like the track a lot. I just want to say thanks to all the people, all my team. We’re going to keep pushing really hard and just really thanks to everybody.”