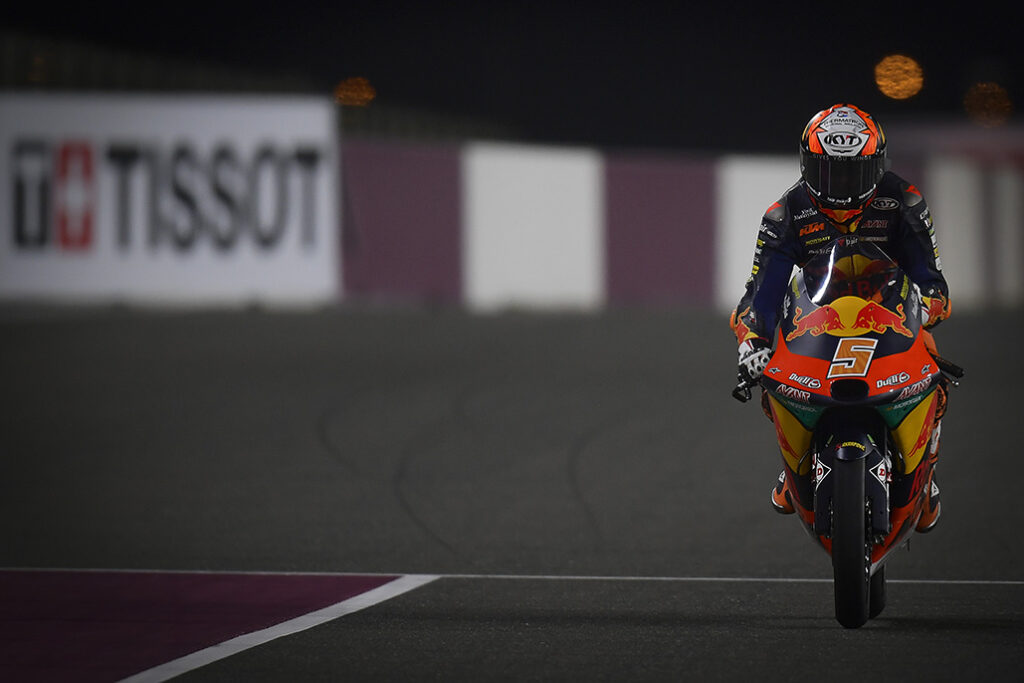 The Qatar GP winner snatches it late, with Garcia and Alcoba next up but some pitlane starts switching up the grid.

He left it late but Qatar GP race winner Jaume Masia (Red Bull KTM Ajo) will start from pole at the TISSOT Grand Prix of Doha after a last dash to the top, the Spaniard taking it from Sergio Garcia (GASGAS Gaviota Aspar) by less than a tenth as the Championship leader proved the only rider under the 2:06 mark. Garcia was second quickest but will start from pitlane due to a penalty, with third quickest in Q2, Jeremy Alcoba (Indonesian Racing Gresini Moto3), therefore set to start second. His teammate Gabriel Rodrigo was fourth fastest but bumps up onto the front row.

The pitlane start penalties played their part deciding the Moto3™ grid even before qualifying did, with seven riders – including Garcia – given the punishment for their riding in FP2 on Friday evening. The rest are Pedro Acosta (Red Bull KTM Ajo), Romano Fenati (Sterilgarda Max Racing Team), Dennis Foggia (Leopard Racing), Stefano Nepa (BOE Owlride), Deniz Öncü (Red Bull KTM Tech 3) and Riccardo Rossi (BOE Owlride), with a few in Q2 and a few in Q1, complicating life somewhat for those looking to move through.

Once Q1 was underway though, it was the experienced head of Andrea Migno (Rivacold Snipers Team) who topped the first qualifying session with a 2:06.925, a tenth faster than Leopard Racing’s Dennis Foggia and Xavier Artigas. Jason Dupasquier (CarXpert PrüstelGP) got the job done to earn the final place in the top four and with the windy conditions making a big difference, slipstreaming – an ever-present factor in the lightweight class – was even more important than before.

Once they headed back out for Q2, Garcia was the early pacesetter but Migno was soon at the summit. The Italian, lapping with the Leopard duo and Dupasquier, then improved on his second lap to go over a tenth clear of Garcia with seven minutes to go. Izan Guevara (GASGAS Gaviota Aspar) was provisionally on the front row too, with the likes of John McPhee, his Petronas Sprinta Racing teammate Darryn Binder and World Championship leader Masia languishing outside the top 10.

The fun and games started as the riders headed out for their second runs though, with everything coming down to the final three minutes and a one-lap dash for the entire 18-strong field. As they thundered over the line, Garcia was the first to take to the top but almost immediately, Masia snatched it back by less than a tenth. Just behind them, Indonesian Racing Gresini Moto3 duo Alcoba and Gabriel Rodrigo were able to propel themselves to P3 and P4, with McPhee and Binder also improving in the same gaggle of riders. But no one could beat Masia’s laptime.

That leaves the Championship leader top of the pile in the perfect position to try and complete the double on Sunday, although pole is nearly two seconds off last week, the challenge was a different one in the conditions. Garcia heads for pitlane despite going second fastest, with Alcoba and Rodrigo therefore locking out the front row.
.
Tatsuki Suzuki (SIC58 Squadra Corse) heads the second row, with Andrea Migno alongside him as the Italian slipped to sixth fastest but fifth on the grid. Last week’s polesitter Binder and teammate McPhee didn’t have the best Q2 but were P7 and P8, and both move up a place in the penalty shuffle: Binder completes Row 2 as McPhee spearheads Row 3.

Rookie Pedro Acosta was the ninth fastest man in Q2, but the Red Bull KTM Ajo rider also has a pitlane start so it’s two positions gained for those directly behind him. The first of those was 10th fastest Izan Guevara who will start eighth, ahead of Jason Dupasquier as the Q1 graduate was 11th quickest and moves up to complete the third row.

Row 4 has two Qatar GP winners at the helm in the form of Niccolo Antonelli (Avintia Esponsorama Moto3) and Kaito Toba (CIP Green Power), with Xavier Artigas (Leopard Racing) moving up to 12th on the grid as Fenati and Nepa join Garcia and Acosta in pitlane. Artigas does, however, have to do two Long Lap penalties in the race after his incident in the Qatar GP.

That’s it from another classic Moto3™ shootout, and it’s early points leader Masia who continues to lay down the marker in 2021. With pitlane starts and penalties coming back to haunt many on Sunday, it promises to be another phenomenal Moto3™ encounter so tune in at 17:00 local time (GMT+3).

Jaume Masia: “You can see, it’s a really windy day and this morning I didn’t push at 100% because it was dangerous and would have been a stupid risk to take. But now I’m really happy for this pole position, we will keep working on this line and I’m ready for the race tomorrow.”