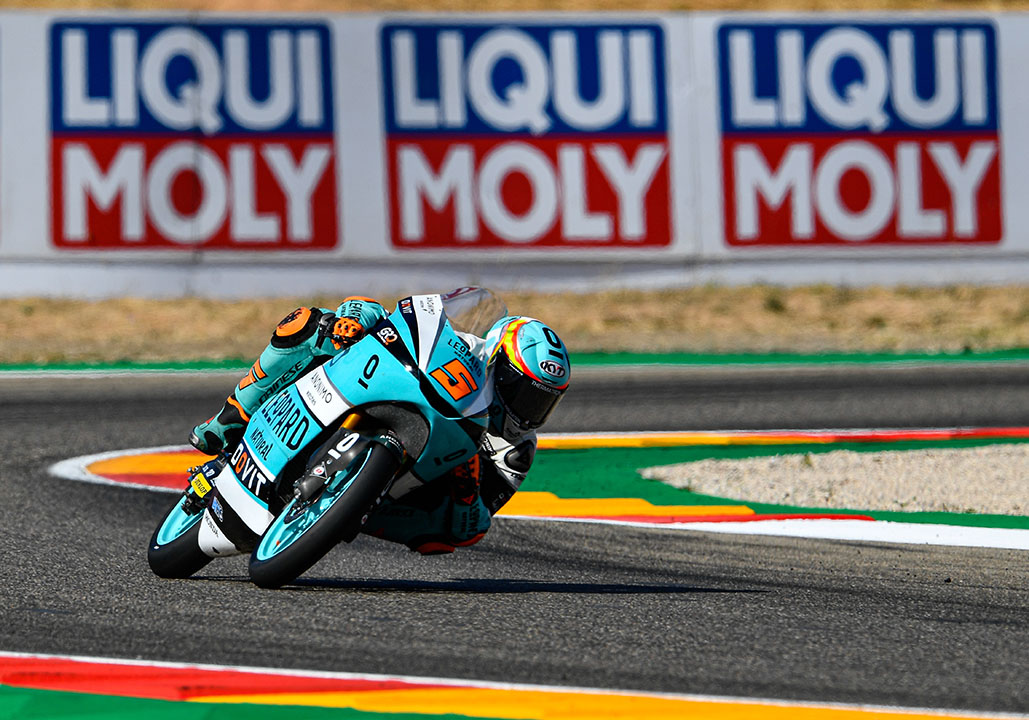 The Aragon GP winner pips Alcoba by 0.004 to head the timesheets on Friday, with Fenati completing the top three.

Aragon GP winner Jaume Masia (Leopard Racing) remains the man to beat at MotorLand after Day 1 of the Gran Premio Liqui Moly de Teruel, going fastest in FP1 and no one able to depose him in the afternoon. It was close, however, with Jeremy Alcoba (Kömmerling Gresini Moto3) fastest in FP2 to cut the gap to just four thousandths. Romano Fenati (Sterilgarda Max Racing Team) completed the top three, still within a tenth and a half of the top.

FP1
Masia started where he left off last weekend, the Spaniard leaving it late but topping the session from Fenati. Everybody inside the top 17 improved in the final five minutes in a late dash for the top, and Masia’s 1:58.076 was enough to see him take it.

Deniz Öncü (Red Bull KTM Tech3) opened his weekend in fine form in third overall, with times already homing in on what would have been good enough for the front two rows of the grid last weekend and much warmer track and ambient temperatures on a sunny Teruel Friday.

Championship leader Albert Arenas (Solunion Aspar Team Moto3) started the weekend fourth on the timesheets, maintaining his solid speed at the venue, ahead of an impressive return for Tony Arbolino (Rivacold Snipers Team), who was fifth. The Italian is back from his mandatory self-isolation after contact with a case of Covid-19, and he missed the Aragon GP – so it was his first taste of the track since last year.

There was only one crasher: Andrea Migno (Sky Racing Team VR46). The Italian slid out at Turn 8 aka the Aragon corkscrew, no harm done.

FP2
In the afternoon it was Aragon GP poleman and podium finisher Raul Fernandez (Red Bull KTM Ajo) who led for much of the middle part of the session, but Alcoba struck late to go fastest and then beat his own best to guarantee P1 in FP2 by just under a tenth and a half. Third in the afternoon went the way of Rodrigo, and the Argentinean rider was also the protagonist of some drama as he crashed at Turn 14 and Jason Dupasquier (CarXpert PrüstelGP) had to take some avoiding action through the gravel, riders ok.

Darryn Binder (CIP – Green Power) was fourth fastest in the afternoon ahead of a much improved session from Ogura in fifth, the two with a little clear air ahead of McPhee in P6 once again. Arenas was tenth ahead of Arbolino, with Vietti down in P16.

The overall timesheets, however, are a mix of FP1 and FP2 – and the top was decided by just 0.004 in favour of Masia. The Aragon GP winner’s FP1 lap edged out Alcoba’s FP2 best, with Fenati’s FP1 time putting the Husqvarna rider in third overall.

Fernandez lost out to Fenati by just 0.008 as he was forced to settle for fourth, with Rodrigo and Binder locking out fifth and sixth courtesy of their afternoon laptimes as well – and split by just 0.005. Öncu was shuffled down to seventh overall with the FP1 lap that saw him end the morning in third, again by a tiny margin – this time 0.006.

Ogura was eighth overall and the fastest of the top five in the Championship, with three key competitors right behind him. Arenas was the next as he took P9 but 0.187 off his closest Championship rival, with McPhee completing the top ten ahead of Arbolino. As it stands, Dennis Foggia (Leopard Racing), Filip Salač (Rivacold Snipers Team) and Tatsuki Suzuki (SIC58 Squadra Corse) are currently the last riders with a provisional place in Q2… with Vietti ending the day in P15 overall and unable to improve in the afternoon.

That makes FP3 even more vital for the Italian as the final chance to guarantee a place in Q2, and Moto3™ will be back out on Saturday morning at 10:00 (GMT +2) for more before qualifying starts from 13:15!