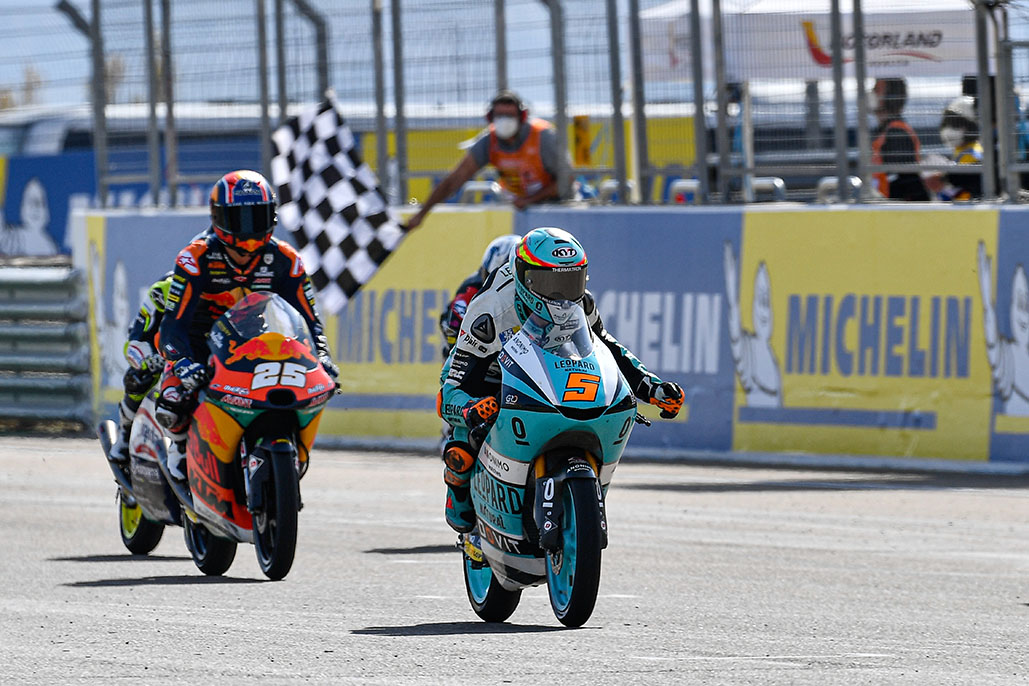 The Spaniard takes to the top step for his first win of the season, ahead of Binder and a first podium for Fernandez… but it’s Arenas who wins big in the title fight

Jaume Masia (Leopard Racing) threatened it last time out, but at MotorLand Aragon the Spaniard got the job done to perfection to take his first victory of the season and become the 100th different Grand Prix winner for Honda. After charging up from P17 on the grid, the man he just beat to the line was Darryn Binder (CIP – Green Power), the South African less than a tenth off, with polesitter Raul Fernandez (Red Bull KTM Ajo) taking his first Grand Prix podium in third.

Albert Arenas (Solunion Aspar Team Moto3) took the holeshot from pole, the Championship leader getting the jump on polesitter Fernandez – but not for long. The number 25 struck back quickly, before Tatsuki Suzuki (SIC58 Squadra Corse) also made short work of Arenas too. There was early drama hit for Gabriel Rodrigo (Kömmerling Gresini Moto3) as he crashed out, and not long after John McPhee (Petronas Sprinta Racing) and Alonso Lopez (Sterilgarda Max Racing Team) were given their Long Laps to take within three.

At the front, a distinct group of four had broken away: Fernandez, Suzuki, Arenas and Romano Fenati (Sterilgarda Max Racing Team), with Darryn Binder hunting them down and, not long after, joining the battle to make it a five-rider fight. Meanwhile, title challengers Celestino Vietti (Sky Racing Team VR46) and Ai Ogura (Honda Team Asia) found themselves mired down in the fight for sixth – and not at the front of that freight train either.

As the five at the front fought it out, however, their pace started to come down and what had seemed an insurmountable gap was suddenly an awful lot smaller. The trio on their tail were Masia, McPhee – despite his Long Lap – and Jeremy Alcoba (Kömmerling Gresini Moto3). And then there were eight, and once on the scene, McPhee struck quickly to take Suzuki at the rear of the initial leaders to make it a full group battle.

Fernandez remained pretty steadfast in the lead until a mistake just onto Lap 14, when Binder swept through to capitalise immediately – followed by Arenas. And the number 75 took the lead not long after that as Fernandez was then forced to defend from Fenati for third. But war broke out at Turn 1 next time around, and just like that the number 25 was back in the hot seat and the whole group had shuffled.

At the start of the penultimate lap, McPhee headed a bit wide and dropped down to just ahead of Suzuki, who seemed to be struggling to hang in with the group, and Arenas also opened the door for Binder to go through. Masia was at the front of the train though and there he would remain – the man ahead onto the last lap.

That had already changed by Turn 2, however, as Fernandez took the baton back and Alcoba threatened in third. Arenas was fourth at that point before the title leader then ran wide on the exit of Turn 5, and then Alcoba and Masia got very close for comfort into Turn 8. Fernandez was still leading as they shuffled behind him though, with Binder round the outside of Alcoba at Turn 14 to have the inside line at Turn 15, grabbing P3 heading onto the back straight.

The podium three were the top three, but it was Fernandez, Masia, Binder still as the three opened the gas down the straight. Tucked into Fernandez’ slipstream though, Masia was the man on the move, able to reel Fernandez in and then take over at the front, with Binder also slipstreaming past the number 25. Coming over the crest of the hill, Masia held it to the line to earn his first victory with Leopard Racing from P17 on the grid – Honda’s 100th different Grand Prix winner.

Binder lost out by less than a tenth but earned his second podium of 2020, and Fernandez may have lost out on the win but the Spaniard bwas ecstatic to seal his maiden World Championship podium.

Fenati had another solid ride to take fourth as the Italian remains super consistent, with McPhee recovering well from his Long Lap and Turn 1 excursion to claim P5 – and important points for the Championship. Alcoba crossed the line P6 in the end, the rookie again impressing, with Arenas losing out on the last lap to finish P7 – just 0.396 from victory though. Suzuki lost touch in the latter stages but took eighth, still on the comeback to full strength.

Vietti never troubled the leading contenders in Aragon but finishes just a couple of places behind Arenas in P9, with Dennis Foggia (Leopard Racing) rounding out the top 10 as the Italian had Kaito Toba (Red Bull KTM Ajo) and Tatay for company in P11 and P12 respectively. Ayumu Sasaki (Red Bull KTM Tech3) finished a lonely P13, the Japanese rider finishing six seconds ahead of struggling compatriot Ogura. It’s just two points picked up in Aragon for the man second in the Championship as Ogura slips to 13 behind Arenas. Deniz Öncü (Red Bull KTM Tech3) picked up the final point at the Aragon GP in P15.

Another scintillating lightweight class encounter sees Masia become the 100th Honda rider to win a Grand Prix, Arenas extend his lead and Ogura continue searching for his earlier season magic. But it could all change again, so get set for another MotorLand Aragon battle in seven days’ time…

Jaume Masia: “For sure, I didn’t expect that rhythm. But I was thinking about not losing my confidence with the bike, the team worked a lot, but all weekend we struggled a lot with the setting unlike in Le Mans. I don’t know how I arrived at the group as Raul put in a high rhythm, he was really strong. But finally we arrived at the group, maybe we pushed the rear too much and used it too much, but finally with my bike on the straight I could overtake Raul.”