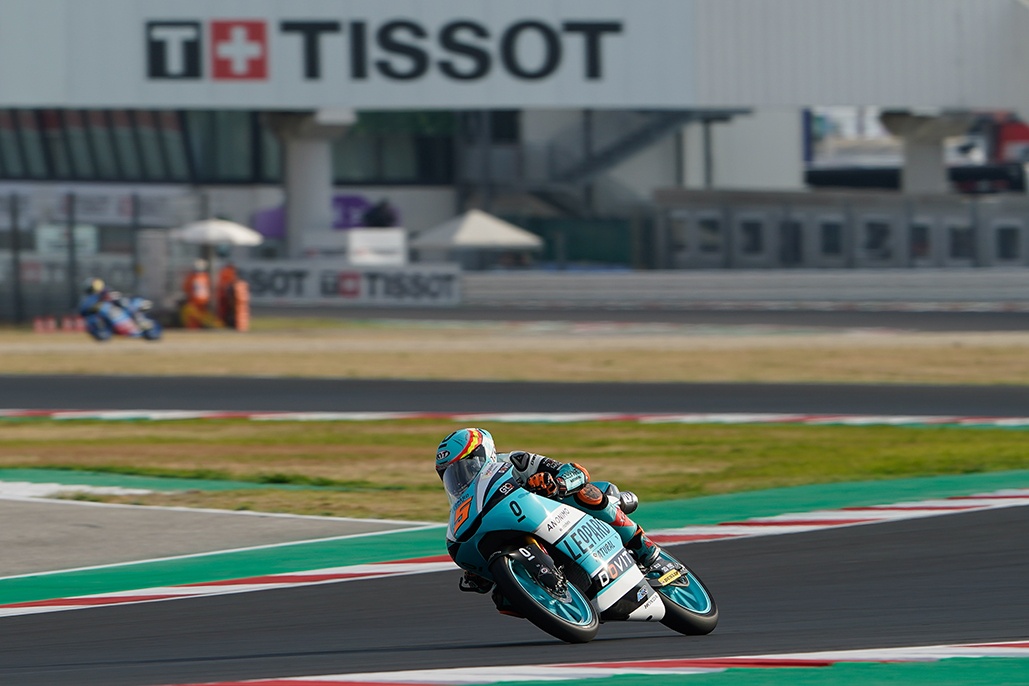 The Spaniard ends the day three tenths clear of Fernandez, with key Championship challengers shuffled back on Friday.

Jaume Masia (Leopard Racing) set a new all-time lap record on Friday at the Gran Premio TISSOT dell’Emilia Romagna e della Riviera di Rimini, a 1:41.663 putting him just under three tenths ahead of Raul Fernandez (Red Bull KTM Ajo) by the end of play. Celestino Vietti (Sky Racing Team VR46) completed the top three by just 0.021 as action got back underway at Misano World Circuit Marco Simoncelli, with the top three in the Championship all outside the top ten on Day 1.

FP1
In FP1 it was Fernandez once again fastest out the blocks, the Spaniard’s last dash 1:41.962 making him half a second quicker than Ai Ogura’s (Honda Team Asia) pole position laptime last weekend. He was also just a fraction away from the 2019 outright lap record that Masia would go on to break in FP2. Reigning FIM Moto3™ Junior World Champion Jeremy Alcoba (Kömmerling Gresini Moto3) was second quickest, 0.164 back, with Dennis Foggia (Leopard Racing) in third only another 0.026 in arrears.

Gabriel Rodrigo (Kömmerling Gresini Moto3) and Andrea Migno (Sky Racing Team VR46) were a quarter of a second back in fourth and fifth.

Masia had a scary moment early on but later found some rhythm to start the day in sixth, just ahead of Filip Salač (Rivacold Snipers Team) and World Championship leader Albert Arenas (Gaviota Aspar Team Moto3). They were the final two of the eight riders who managed to go under Ogura’s pole lap from the San Marino GP.

FP2
In the afternoon, Masia moved from sixth to top as he smashed the lap record, ending the afternoon fastest ahead of Vietti as the Italian looks to bounce back from a tougher first weekend on home soil. Suzuki and Migno were next up, with Fernandez down in fifth and suffering a highside in the session – rider ok and even able to get it back to the pits.

Masia is the man leading the way to FP3 on the combined timesheets after that new lap record, and he’ll likely feel confident of moving through to Q2 despite a penalty he has to serve in the FP3 session. The Spaniard is one of a number of riders suspended from the last 15 minutes due to slow riding in practice last weekend.

Will the grid be able to get the jump on him? Next overall on Friday is Fernandez with his best laptime from FP1, ahead of Vietti, Suzuki and Migno with their fastest efforts from FP2. Alcoba slots into sixth overall courtesy of his FP1 lap, with Salač’s FP2 lap putting him just 0.007 behind the Spaniard.

Foggia’s FP1 quickest puts him in P8 and he’ll be another sitting out the final 15 minutes of FP3, so he’ll be looking for more early on Saturday to ensure he keeps that provisional place in Q2. Rodrigo was ninth overall, with Stefano Nepa (Gaviota Aspar Team Moto3) completing the top ten.

Ayumu Sasaki (Red Bull KTM Tech 3) bounced back from a DNF through no fault of his own last time out to take P11 overall, ahead of Championship leader Arenas by just 0.033. The last two currently set to move through to Q2 are Tony Arbolino (Rivacold Snipers Team) – who’ll be missing the last 15 minutes of FP3 as well – and Kaito Toba (Red Bull KTM Ajo).

That leaves a couple of familiar names outside that all-important top 14 and looking to move forward in FP3: San Marino GP winner and third in the Championship, John McPhee (Petronas Sprinta Racing), who is P15 overall, as well as the man second in the title fight, Ai Ogura. Last week’s polesitter was down in P19.

Can they bounce back on Saturday? FP3 begins at 9:00 (GMT +3), with an interesting final slice of the session to come as Arbolino, Foggia and Masia join Ryusei Yamanaka (Estrella Galicia 0,0) and Davide Pizzoli (BOE Skull Rider Facile Energy) on the sidelines after having been penalised for riding slowly in FP3 last weekend. Qualifying then begins from 12:35 (GMT +2)!