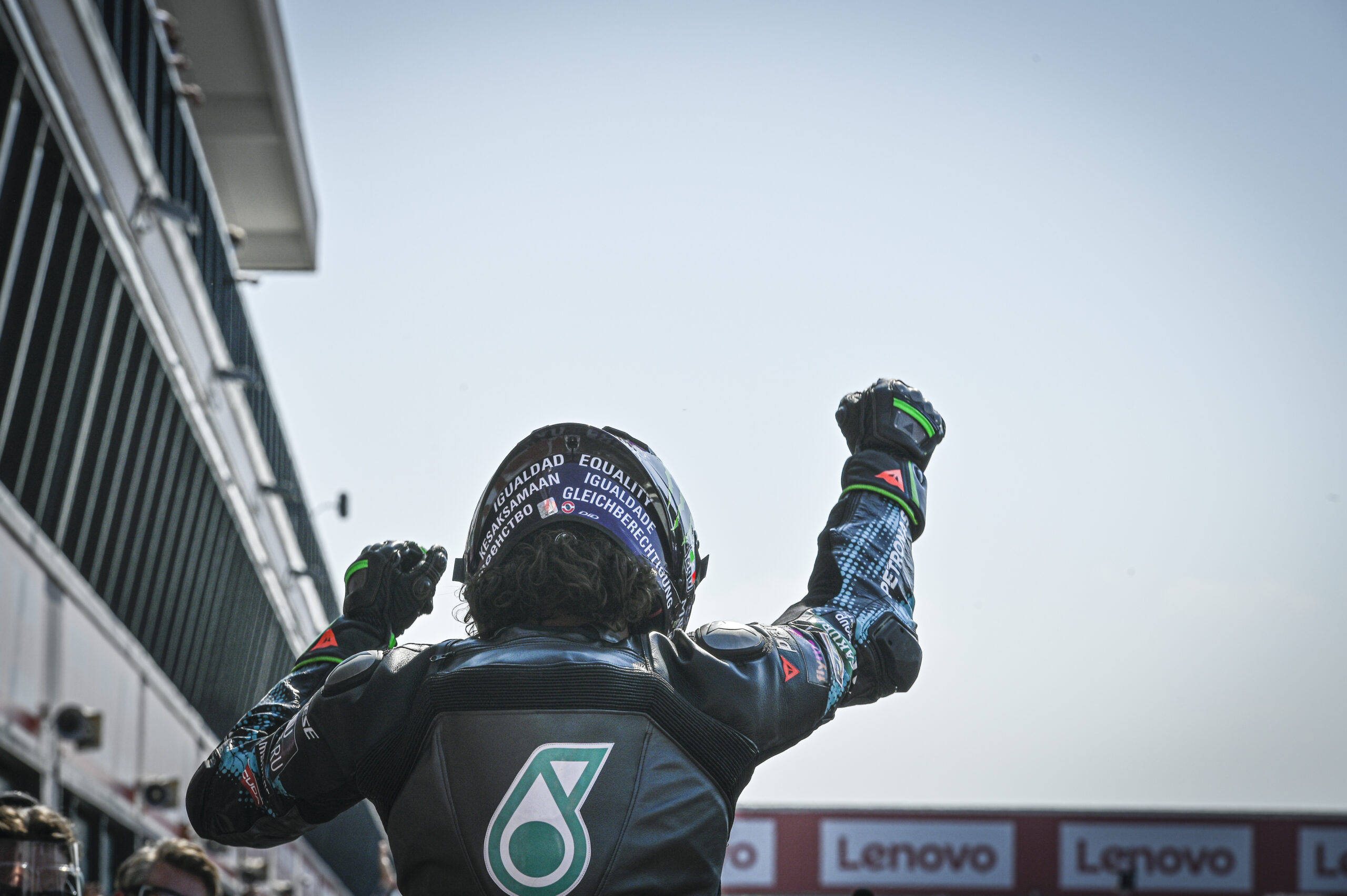 The Italian is the fourth maiden winner in six races, with Bagnaia on the podium for the first time in second as Mir outfoxes Rossi for third.

From the middle of the front row, Morbidelli out-dragged both Maverick Viñales (Monster Energy Yamaha MotoGP) and Quartararo off the line and headed into Turn 1 leading, with fourth place Rossi getting a superb start to slot into second ahead of the equally fast starting Jack Miller (Pramac Racing) from the second row. Viñales slipped to P4, with Quartararo slotting into P5 as Morbidelli and Rossi sent the Italian fans into raptures on the opening lap.

Rossi got a good run down into Turn 8 on Lap 1 and showed a wheel to Morbidelli, but the latter was late on the brakes and closed the door. The numbers 21 and 46 then started to create a bit of a gap to third place Miller, with Viñales holding off both Quartararo and the two Team Suzuki Ecstar machines of Alex Rins and Joan Mir. Viñales was the only rider on the grid to select the hard Michelin rear tyre, and the lap record holder seemed to be taking his time to get it up to speed – with Quartararo looking impatient behind.

The riders then settled into their rhythm, with Miller hauling in the leading duo to sit a couple of tenths behind them and Viñales and co just over half a second back from the Australian. Meanwhile, Miller’s teammate Bagnaia was setting fastest lap after fastest lap, and the injured Italian had soon latched himself onto the back of the Viñales-Quartararo-Rins-Mir train. On Lap 7, Quartararo then made his move past Viñales at Turn 14 – and his eyes were firmly set on the podium trio just a stone’s throw up the road.

However, the Frenchman’s progress took a swift dive only moments later as he went in a little hot at Turn 4, and it would prove costly as the Championship leader tucked the front and crashed out of fourth place in another 2020 MotoGP™ title twist. Quartararo remounted but was down in P20, over 15 seconds down on Stefan Bradl (Repsol Honda Team). The number 20 would later enter pitlane, suffer a tip off and then retire from the race.

Back up front meanwhile, Morbidelli was still easing round in the lead, although Rossi was able to keep his protégé close – for the time being. Miller was also holding firm in P3 but Pecco was on the move and the Italian was through on Viñales down the back straight into Turn 11, that Ducati grunt being put to good use.

Bit-by-bit, Morbidelli was starting to pull away from ‘The Doctor’. By Lap 12 the gap was creeping up towards a second as Bagnaia and Rins continued to make formidable progress further back, and Miller was clearly starting to struggle. Rins produced the classic Turn 2 Misano move to grab 4th from the number 43 and then, heading down into Turn 8, Pecco was through on the Aussie too. Now, Rins and Pecco had Rossi 1.8 seconds up the road, with ‘The Doctor’, in turn, losing touch with Morbidelli. The gap between the Italians was 1.1 seconds – and rising – but it was Mir who was now the fastest man on track…

With 11 laps to go, the gap was down to below a second as the podium scrap started to bubble up in the San Marino sun, and a lap later Rins and Pecco were just half a second down on the nine-time World Champion. The podium battle was well and truly game on.

Into the last 10 laps the riders went, and Mir had got the better of Miller. The sophomore was 1.9 seconds back from the podium scrap, with Rins and Pecco now right on the back of Rossi. The first move was Pecco slicing underneath Rins into the scintillatingly quick Turn 11 and on the next lap, Bagnaia was at it again. This time his good friend Rossi felt the wrath of the Ducati power and Pecco – who fractured his leg just over a month ago – was up into second and on the way to a maiden podium.

By this point, Mir had closed the gap to the trio ahead of him and was doing so at a significant rate of knots. The gap was 1.4 to his teammate, and it seemed the fight for the podium was going to heat up even more. The fight for victory, however, was between Morbidelli and only Morbidelli. A dream debut premier class win was in sight as the number 21 was 2.8 seconds up the road, and Bagnaia was creeping clear of Rossi. With six to go at Turn 8, things got even closer between Rins and he number 46 too, as the Suzuki rider got the run down the straight and showed a wheel up the inside. Rossi closed the door – no way through for Rins, but Mir was then just one second back.

With five to go, Rossi was still holding strong in third place as he continued to ride an impressive defensive display – especially at Turn 2, where Rins looked superb but couldn’t make it happen. With three to go, Rossi was then suddenly 0.4 faster than Bagnaia too – and what looked like a guaranteed second for the former Moto2™ World Champion now became a proper dog fight for second and third.

Coming around the final sector on the penultimate lap, Rins was out the saddle on the exit of Turn 15 and then ran slightly wide at Turn 16, allowing Mir to get the run on him down into Turn 1. Mir was then on a mission as a second podium of the season stood right in front of him… on the last lap, against Rossi, at Misano. Rossi himself was aiming to grab P2 back from Pecco though and it was as you were heading out of Turn 8…

Suddenly, Mir then mugged Rossi. The Spaniard produced an absolutely sublime move up the inside at Turn 10 to climb into third, with the Italian trying to set up a move coming into the Turn 14 hairpin but heading slightly wide at Turn 13… ending his hopes of a dream 200th podium in his backyard.

At the front though, it was pure magic for Morbidelli. The Italian simply didn’t put a foot wrong at Misano and led from start to finish to propel himself right into the 2020 title fight after two disastrous couple of weekends at the Red Bull Ring. In addition, the Italian becomes the fourth rider in six races to win their first MotoGP™ race this year – how’s that for excitement and unpredictability?

Bagnaia’s return from injury couldn’t have gone much better, the sophomore by far and away the fastest Ducati rider at Misano to claim his first MotoGP™ podium, going some way to making up for a lost rostrum after a mechanical at Jerez. Mir, meanwhile, produced an astonishing second half of the race to outfox Rossi on the last lap at Misano – and not many riders can say that. With Bagnaia on the rostrum, that’s 12 different podium finishers in the six 2020 races!

For Rossi, there is bound to be some disappointment for missing out on a home Grand Prix podium by just three tenths. Nevertheless, it was a magnificent performance from the 41-year-old, who will now be as determined as ever to pick up his 200th GP podium in seven days’ time. On a positive not though, Rossi is just 18 points from new Championship leader Andrea Dovizioso (Ducati Team)…

Rins’ error on the penultimate lap cost him a chance of a podium that looked nailed on for much of the second half of the race, but P5 is a solid job to put him just 36 points from top spot. After looking so strong throughout Free Practice and qualifying, Viñales’ race just didn’t materialise. The Spaniard eventually found his rhythm at the end of the race on the hard rear tyre and was searing around, but it was far too late and he had to settle for a disappointing P6.

Seventh went the way of Dovizioso who, despite having more muted weekend, now leads the Championship after Quartararo’s misfortunes. The Italian got the better of Miller in the closing stages to take some crucial points from the first or two Misano races, but there’s work to do. Miller’s early pace didn’t last and the Aussie slipped down the order to cross the line in ninth, but Takaaki Nakagami (LCR Honda Idemitsu) was handed a one-place penalty for exceeding track limits on the final lap so it’s P8 for Miller, P9 and the leading Honda accolade for Nakagami, and Pol Espargaro (Red Bull KTM Factory Racing) winning the KTM battle for P10. Miguel Oliveira (Red Bull KTM Tech3), Brad Binder (Red Bull KTM Factory Racing), Aleix Espargaro (Aprilia Racing Team Gresini), Iker Lecuona (Red Bull KTM Tech3) and Johann Zarco (Esponsorama Racing) rounded out the points.

Another little chunk of history made at Misano underlines the stunning unpredictable 2020 season so far, and the Championship has taken another almighty twist. Quartararo’s DNF is his first since the 2019 Australian GP and he loses the title lead for the first time in 2020 after crashing twice on Sunday in a a day to forget for the Frenchman. Dovizioso now takes charge, but it’s so close: 28 points separate the top 10 riders, with Bagnaia’s second place seeing him 47 points off in P14.

Now much of the MotoGP™ field will be out for a test on Tuesday, and then we go again at Misano World Circuit Marco Simoncelli next weekend. Bring it on!

Franco Morbidelli: “It feels… it don’t know how it feels, I’m still trying to process everything. Definitely it’s good and a good feeling! I’m very happy, I’m enjoying the moment. The only thing I can say is thanks to my team, thanks to my people and all the people who’ve been working with and helping me. On the last laps I was thinking a lot and about how seven years ago I was here racing in the Italian Championship, Superstock, winning that race… this felt just the same but MUCH MORE! So I’m just overwhelmed at the moment, the only thing I can say is thank you to everyone!”