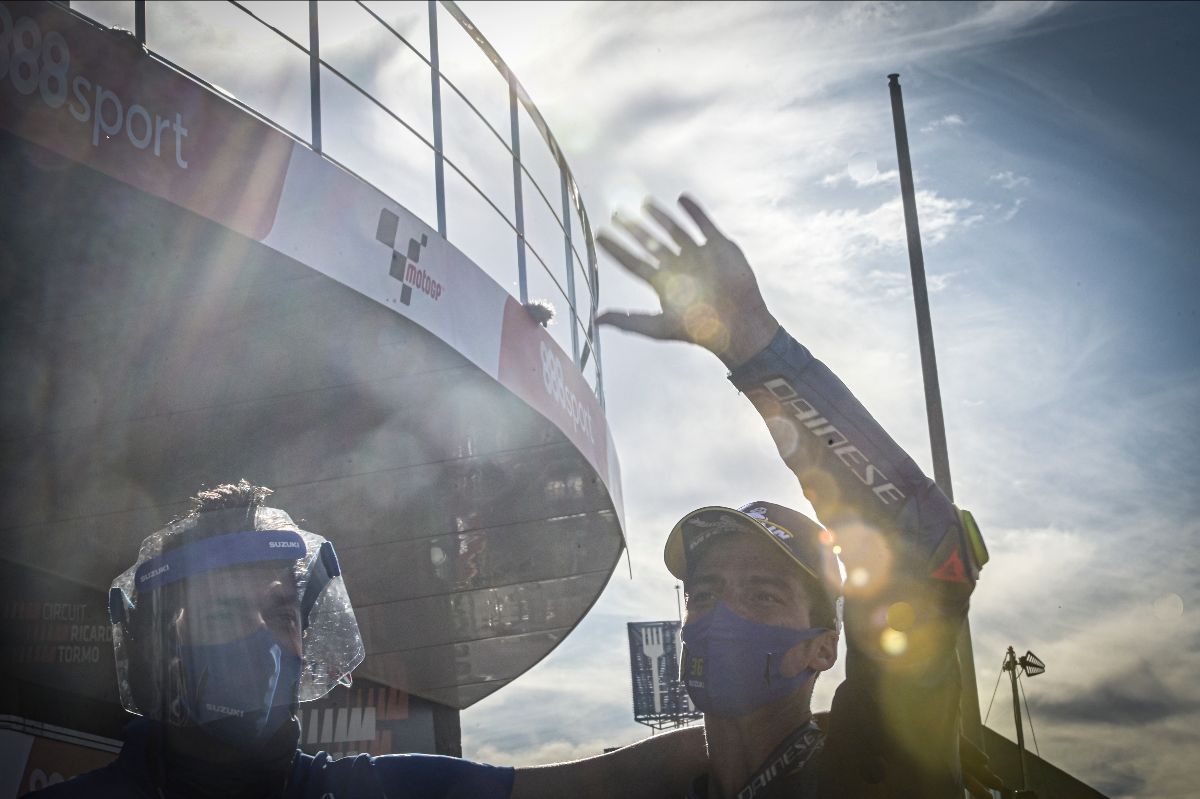 37 points clear, the Suzuki rider has his first shot at the crown – and it’s far from a long one.

For months, the fight for the 2020 MotoGP™ World Championship has seemed too close to call, with almost half the field in with a mathematical chance at the crown. With 15 different riders on the podium and a record-equalling nine different winners, five of them first timers, there have been more twists and turns than anyone would have predicted when competition re-started in Jerez. Yet here we are, on the verge of more history and with one man now firmly in the driving seat: Joan Mir (Team Suzuki Ecstar).

The Majorcan is now 37 points clear of the competition and he arrives into his final stand with that last box finally ticked: a premier class victory. Not only that, he ticked that box under likely the most pressure he’s had all year, not that anyone would have been able to tell. “People who can’t pay rent, that’s real pressure. This is my job,” is what Mir told the media after the race. Next time he faces them after the flag, it may well be as the first fresh face to win the title in seven years, the first Moto3™ Champion to become premier class Champion, and the first Suzuki rider to do it in two decades.

The pressure to win, with a 37-point advantage, may well be less in the Gran Premio Motul de la Comunitat Valenciana than the pressure on those who stand to lose, however. This weekend, Mir needs a mere podium to wrap up the crown and as the most consistent man in the field for some time, arriving back at the venue where he just took his first MotoGP™ win, the Majorcan’s higher ground is more mountain than molehill.

The resistance won’t throw in the towel without a fight though. Mir’s closest challenger is, was, and has been for quite some time Fabio Quartararo (Petronas Yamaha SRT), with the Frenchman retaining second overall by virtue of his win count, now equal on points with Alex Rins (Team Suzuki Ecstar). Quartararo crashed out of the first race at Valencia, and it’s now or never for ‘El Diablo’. Will that see him come out swinging to bounce back? Or does it put him on the back foot as he tries to regain some serious ground?

Rins, in third, is on the back foot in terms of points but on a roll in terms of momentum. A win followed by two podiums – and having the measure of his teammate at MotorLand – makes for some good reading of late for the number 42, and he was back on the podium to complete the first Suzuki 1-2 since 1982 last time out. Can he find what was missing to stay on a par with Mir and beat him? Having overcome a serious shoulder injury this year, it’s an impressive achievement for Rins to even be in with a shout. But he is, and he’s also in the best position to observe the man at the top because Mir isn’t behind enemy lines… he’s on the other side of the garage.

Maverick Viñales (Monster Energy Yamaha MotoGP), meanwhile, arrives with a deficit of 41 points and it’s very much last call for ‘Top Gun’. After exceeding his engine allocation, he had to start from pitlane last time and we didn’t get to see what he can do at the front round the Circuit Ricardo Tormo. Pretty much accepting of the fact the fight for the title is over, Viñales can gas it first and think of points later, which could be interesting. That’s also true for Franco Morbidelli (Petronas Yamaha SRT), who had a tough time out in the Europe GP. But a full race distance is lessons learned, and he’s already a two-time MotoGP™ winner.

Andrea Dovizioso (Ducati Team) is now sixth overall although equal on points with Morbidelli, the two men 45 off Mir, so there’s little Championship pressure – although Pol Espargaro (Red Bull KTM Factory Racing) is coming in hot, now just 11 points further back, and he was on the podium last time out. For Dovizioso too though, Valencia is his penultimate race before taking a planned sabbatical in 2021, so that could have an effect. Will there be another shuffle in the tightly-packed fight for the top five? Or will another weekend with more track time see Dovi move forward?

Moving forward is something on the agenda for Takaaki Nakagami (LCR Honda Idemitsu) too, although he had a stunner last time out as he equalled his best result in fourth. Traditionally though the Japanese rider has been quicker on take two at the same track and that bodes well. Jack Miller (Pramac Racing) and Miguel Oliveira (Red Bull KTM Tech 3) are well within striking distance of Nakagami or higher in the title fight too – and both were the next men up the road in the Europe GP. Can they move forward? And can Brad Binder (Red Bull KTM Factory Racing) leapfrog them? The South African fought back from a Long Lap Penalty to end up seventh – and stunningly, set the fastest lap of the race. That sees him get back ahead of Alex Marquez (Repsol Honda Team) in the fight for Rookie of the Year, too… so there’s a lot on the line.

That is, course, true up and down the field, and no more so than at the top. After five months of madness, mayhem and magnificent MotoGP™ races, it’s all come down to this: Joan Mir, with 37 points and a new trophy in his pocket. Tune in on Sunday at 14:00 (GMT +1) as the field take on the Circuit Ricardo Tormo once again; you’re guaranteed either a coronation or a stunner of a last stand.