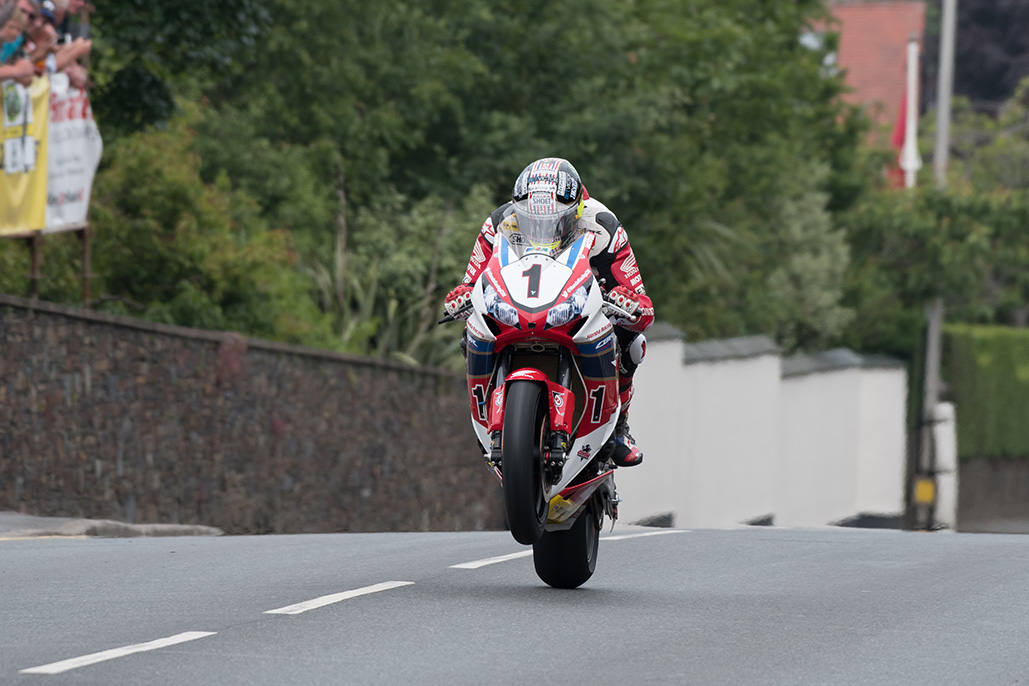 Morecambe’s John McGuinness has had his motorcycling achievements recognised having been made a Member of the British Empire (MBE) in the 2021 New Year’s Honours List.
McGuinness joins a select group of motorcyclists to be recognised in such a manner and follows in the footsteps of, amongst others, John Surtees, Gary Hocking, Jim Redman, Mike Hailwood, Phil Read, Barry Sheene, Joey Dunlop, Carl Fogarty and, the most recent recipient of the MBE, Jonathan Rea.
The now 48-year old has enjoyed an illustrious career in the sport, which spans more than 30 years, with success coming on both the short circuits and on the roads, the latter, in particular, seeing him establish himself as one of the greatest ever especially at the Isle of Man TT Races.
Having made his debut on the 37.73-mile Mountain Course in 1996, McGuinness has gone on to record a stunning 23 wins, the second highest ever in the 113-year history of the event and only three behind the record tally of 26 held by Northern Ireland’s Dunlop.
One of the most popular riders of his generation, his tally of 47 podiums is the highest ever recorded with his wins coming across all solo classes between 1999 and 2015. He also held the outright lap record for a decade.
“I’m thoroughly humbled to receive an MBE and when I started racing all those years ago, never in a million years did I think I’d go on to achieve the success that I have let alone be recognised and honoured by the Queen!” said McGuinness.
“When you look at the previous motorcyclists to have received an MBE, it’s a very select group of riders who are both multiple world champions and legends of the sport so to be recognised in the same way as them now is something I’m extremely proud of.”
“It doesn’t happen very often in our sport so it’s an incredibly special moment for me and my family and even though I received the letter informing me of the award some time ago, I’m still finding it hard to believe so it’ll probably be a while before it properly sinks in.”
As well as the TT, McGuinness has had an equally successful career elsewhere with multiple wins at both the North West 200 and Ulster Grand Prix with victory also taken at the Macau Grand Prix. On the short circuits, he was 250cc British Champion in 1999.
A factory rider for both Yamaha and Honda, the latter seeing the majority of his success, McGuinness can also count a British Superbike Championship podium for Kawasaki amongst his glittering success whilst, off the track, he’s been a regular supporter of various charities over the years, attending countless events up and down the country to help raise funds for those less fortunate.
“Obviously, the Isle of Man TT and my 23 wins there are what people most associate me with but I’ve also been fortunate to achieve success elsewhere and I’m proud of all my achievements whether it’s the TT, my other road racing wins, being British Champion or taking a British Superbike Championship podium.”
“I’ve had a lot of support over the years from a lot of people, particularly my family who have been with me all the way, and also my sponsors and fans and I’m extremely grateful for all of that support. I’ve always tried to give something back to the sport as well so for both myself and motorcycling to be recognised in the New Year’s Honours List is a truly special day.”
Picture by Stephen Davison (Pacemaker Press International)