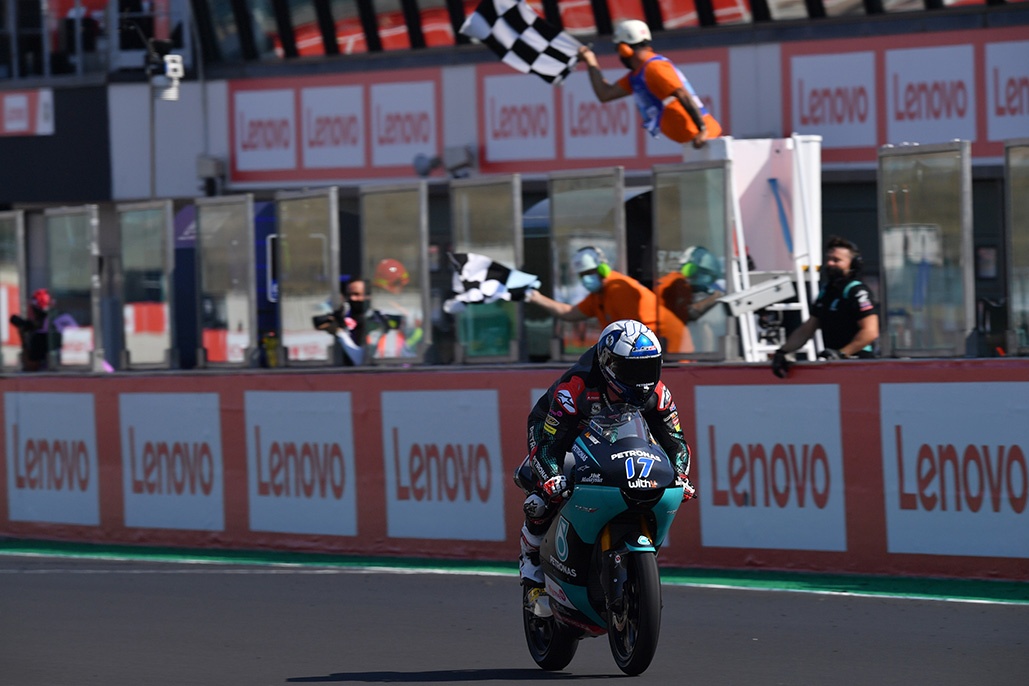 The Scot slices through from P17 to narrowly beat Ogura as Championship leader Albert Arenas crashes out.

John McPhee (Petronas Sprinta Racing) crafted a masterpiece on Sunday at the Gran Premio Lenovo di San Marino e della Riviera di Rimini, slicing through from P17 on the grid to take back to the top step and beat fellow Championship contender Ai Ogura (Honda Team Asia) to the line in the 150th Moto3™ race. The 1-2 for the men second and third overall in the standings is even bigger news at Misano too, as Championship leader Albert Arenas (Pull&Bear Aspar Team) crashed out. There was no such drama for 2019 winner Tatsuki Suzuki (SIC58 Squadra Corse), however, as he completed the podium to give Paolo Simoncelli’s Moto3™ outfit some more hometown glory.

Ogura got the launch he would have been looking for from pole position but Suzuki was clean and aggressive from the start, taking the lead at Turn 2 after starting third. There was big drama from the off in the Moto3™ race moments later though as three riders hit the deck at Turn 4: Sergio Garcia (Estrella Galicia 0,0) tucked the front and took out Raul Fernandez (Red Bull KTM Ajo), with Styrian GP winner Celestino Vietti (Sky Racing Team VR46) unable to avoid crashing either as three contenders were out on Lap 1.

Back at the front, Suzuki was holding firm but Gabriel Rodrigo (Kömmerling Gresini Moto3) was making moves in the early stages, the Argentinian taking the lead into Turn 13 and Ogura following him through. Suzuki bit straight back on the polesitter and we had a freight train as ever, with squabbles up and down the field.

Meanwhile, CIP Green Power’s Darryn Binder, having started P19, was producing the goods on race day again. The South African was up the inside of Andrea Migno (Sky Racing Team VR46) at Turn 4 on Lap 5, and Binder was soon fourth later round the lap. But this was a proper group fight, with three seconds covering the leading 21 riders and the positions changing constantly at Misano World Circuit Marco Simoncelli.

Binder was again getting busy and there was slight contact at Turn 2 with Tony Arbolino (Rivacold Snipers Team) as the Italian tried a move,; just enough to see Arbolino lose a couple of places. Binder then led but Rodrigo, looking mighty in Misano, didn’t let the South African have the baton for long, with the two Leopard Racing machines on Dennis Foggia and Jaume Masia getting the better of Suzuki who felt the wrath of Binder at Turn 5.

After starting from a season’s worst qualifying in P13, Arenas was now rising to the fore. The Championship leader was up to third with nine laps to go…

There was a shot of drama soon after as Binder went down at the exit of Turn 6, but some of the key Championship frontrunners were starting to strut their stuff after quieter races. Arenas, Ogura and McPhee – who started P17 – were into the top six with seven laps to go, although the gaggle of riders that were line astern was still 19, down to Barry Baltus (CarXpert PrüstelGP). Suzuki vs Rodrigo continued at the front.

With five to go though, McPhee was making his move. Squabbling his way to near the front McPhee, made a great move at the final corner to lead – just three laps left on the clock.

Thought you’d seen enough drama in one race? Well, more was about to unfold – and it was the biggest of them all. After being run wide by Arbolino at Turn 2, Arenas crashed at Turn 3… unhurt, but scoring another 0 as second and third in the standings – McPhee and Ogura – marched on at the front.

It was Masia who led onto the last lap, closely followed by McPhee, but Rodrigo was up to second at Turn 2. Suzuki then tried his luck around the outside of McPhee at Turn 4 and 5 – and it worked. Heading down the back straight though, it was elbows out – it couldn’t get much closer. There was contact between Masia and Rodrigo, with McPhee getting a clean run and taking the lead into Turn 8 and Ogura profitting up the inside. The Japanese rider, on the wide line, was then passed by Suzuki heading onto the back straight, with McPhee led the way.

The number 17 held his advantage down the back straight and coming around the last sector, and McPhee made no mistake and despite the best efforts of Ogura, crossing the line in P1 for the first time since Le Mans 2019. Ogura was just 0.037 off as the two title contenders took full advantage of Arenas’ misfortunes, however, as Suzuki takes a SIC58 podium on the track named after the late, great SIC58 – Marco Simoncelli. Ogura
and Suzuki also make it two Japanese riders on the lightweight podium together for the first time since Welkom 2001!

Rookie Jeremy Alcoba (Kömmerling Gresini Moto3) earned his best result of the season with a fantastic P4 result at Misano, getting the better of teammate Rodrigo on the last lap as the Argentinian got shuffled back. Arbolino took a valuable top six on home soil, with Masia having to settle for P7 after getting a little bit beaten up on the last lap. Romano Fenati (Sterilgarda Max Racing Team) picks up his best result of the season in P8, just ahead of Foggia and Migno, who complete the top 10.

After another Moto3™ stunner, the title race takes another titanic twist. Ogura is now just five points behind Arenas in the standings, with McPhee only 14 adrift – is that exciting enough? You bet! The lightweight class riders return to Misano next weekend, so can Arenas bounce back?

John McPhee: “It was a crazy race, I’m a bit lost for words I’m so so happy! To come from 17th! I knew I had the pace all weekend and I’ve been trying to do as much as a I can on my own so I knew where I was at on the bike, massive thanks to the team because it worked so well today and I was able to have a proper fight! I got shuffled back to 11th or 12th with about eight laps to go and I thought ok, I’m not settling for 12th, I have to just put the hammer down here and charge forward, and it paid off.”