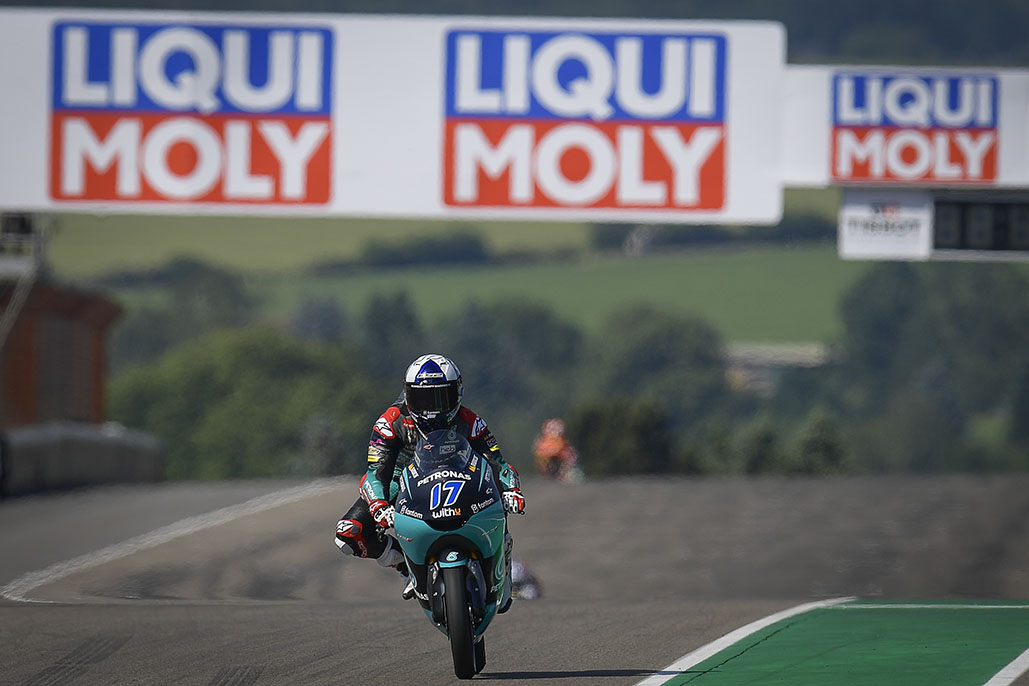 The Brit is fastest out the blocks on Day 1, with a tenth in hand over Suzuki as Moto3™ return to the Sachsenring

John McPhee (Petronas Sprinta Racing) was the man to beat on Day 1 of the Liqui Moly Motorrad Grand Prix Deutschland, the Brit topping the timesheets in the morning and no one able to displace him. Tatsuki Suzuki (SIC58 Squadra Corse) starts his German GP off on good footing too as he ends Friday in second, just over a tenth off the top, with Championship leader Pedro Acosta (Red Bull KTM Ajo) completing the top three after going quickest in the afternoon.

FP1
McPhee left it late to displace Suzuki at the top under the scorching morning sun, with Gabriel Rodrigo (Indonesian Racing Gresini Moto3) slotting into third in the first session of the day. The top three were covered by 0.370, and there were no crashes as the lightweight class got reacquainted with the Sachsenring.

Completing the top five were Stefano Nepa (BOE Owlride) and Championship leader Pedro Acosta, who had his strongest opening day to an event of late and laid some foundations for more pace in the afternoon.

Sergio Garcia (Gaviota GASGAS Aspar Team), French and Catalan GP winner and second in the standings, opened the weekend down in P15, and the afternoon didn’t see the Spaniard make a move up the timesheets after a tougher day at the office.

FP2
The afternoon session saw Acosta move up from fifth to first, the number 37 getting the better of Rodrigo by just 0.044 to send another small warning shot to the rest. Third went to Deniz Öncü (Red Bull KTM Tech3) who, like Acosta, showed top pace from the off despite no previous Moto3™ experience at the Sachsenring… although both do have Red Bull MotoGP Rookies Cup wins at the track.

Suzuki was fast once again in fourth, with Romano Fenati (Sterilgarda Max Racing Team) fifth in FP2. Garcia crashed in the afternoon, rider ok, as did and as was Kaito Toba (CIP Green Power). The number 11 went down at Turn 4 and the number 27 at Turn 3. Andrea Migno (Rivacold Snipers Team) also had an incident, but with a technical problem.

Combined Timesheets
It’s a mix of morning and afternoon on the combined times, with McPhee remaining ahead of the game overall. Suzuki is second, 0.113 down, with the top two both faster in FP1 than FP2. Third went to Pedro Acosta, with the Spaniard’s chart-topper in FP2 putting him 0.351 off McPhee overall.

Fourth goes to Rodrigo with his FP1 lap, with Öncü’s FP2 best enough to see him complete the top five fresh from his first Grand Prix podium. Nepa’s FP1 effort slots him into sixth ahead of Fenati’s FP2 best, with Dennis Foggia (Leopard Racing) and Filip Salač (Rivacold Snipers Team) taking P8 and P9 respectively, thanks to their FP1 times.

Izan Guevara (Gaviota GASGAS Aspar Team) put in an impressive push to take P13 overall on Day 1, despite never – unlike some fellow Moto3™ first timers at the Sachsenring – having ridden the track before. As it stands, Jaume Masia (Red Bull KTM Ajo) is the last rider set to move through to Q2.

That leaves Garcia down in P17 and looking for more on Saturday morning, along with the rider he duelled for the win at Catalunya: Jeremy Alcoba (Indonesian Racing Gresini Moto3). The latter is one of those riding the venue for the first time. FP3 gives them another shot at moving through to Q2, with Moto3™ back on track on Saturday morning at 9:00 (GMT +2).