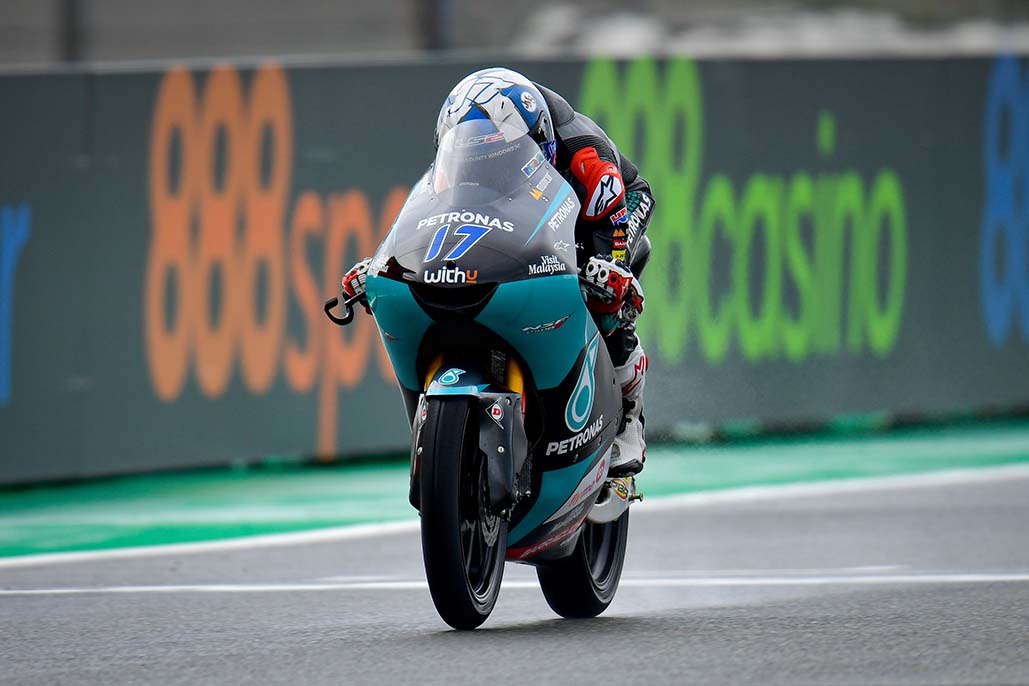 The Brit has Fernandez and title rival Vietti for company on the front row as the heavens open again in Valencia.

Ahead of Q1, very dark clouds were threatening at the Circuit Ricardo Tormo. Three title contenders were in the opening qualifying session, Arenas, Ai Ogura (Honda Team Asia) and Jaume Masia (Leopard Racing). It was a crucial and tense start to the session as the riders piled out on slick tyres, and Arenas had a big moment on his out-lap as the rain started falling – albeit lightly. But after overnight rain as well, there were still plenty of wet patches on track.

Ogura and Arenas were the early leaders in the session, the rain just about holding off, with Masia struggling. Gabriel Rodrigo (Kömmerling Gresini Moto3) then crashed before CarXpert PrüstelGP’s Barry Baltus and Jason Dupasquier went down as well, and then Jeremy Alcoba (Kömmerling Gresini Moto3) took a tumble too as the rain came down at Turn 14. Rodrigo crashed again at said corner to make it a hugely dramatic start to the afternoon. Masia remained three seconds off Ogura’s time at the top, the double MotorLand winner heading back out on wet tyres… but to no avail. He finished P14 in the session, which is P28 on the grid and quite a mountain to climb on Sunday.

Ogura, Rodrigo, Arenas and Dennis Foggia (Leopard Racing) were the four contenders going through to Q2 by the flag, and it would be a wet session to decide pole. The heavens had fully opened for the second part of qualifying and it was Darryn Binder (CIP – Green Power) who set the first banker time. That was immediately beaten by Sergio Garcia (Estrella Galicia 0,0), Arenas and Riccardo Rossi (BOE Skull Rider Facile Energy), but there were going to be plenty of changes in the next 10 minutes.

At the front, Alonso Lopez (Sterilgarda Max Racing Team) had taken over ahead of Binder and McPhee, but the provisional polesitter was the next man down as he crashed unhurt at Turn 4. McPhee then went three tenths clear of Arenas with a 1:52.514, with Garcia tumbling at Turn 9 and Carlos Tatay (Reale Avintia Moto3) at Turn 12 – proving the conditions were continuing to get trickier.

Nevertheless, Fernandez then threatened McPhee’s time to take second, just over a tenth off with two minutes to go. McPhee was responding though, the Scotsman 0.3 under his best time by Sector 3 and as the sun started to pierce through the clouds, the number 17 extended his advantage by another two tenths. Just ahead of McPhee on the road, title contender Vietti crashed at Turn 6 while occupying P3 – the end of his session, but with a good lap in the bank beforehand.

It came down to the final push. Could Fernandez spoil McPhee’s party? On his final lap the Spaniard gave it a cracking shot and coming across the line, he was just 0.064 off the Petronas rider. But then drama hit, with that lap cancelled for the Spaniard. Ultimately, his second best lap was enough, however, giving the Red Bull KTM Ajo rider second on the grid.

He’ll start alongside polesitter McPhee after the Scot took his first pole since the 2019 Austrian GP, with Vietti completing the front row. Arenas heads up Row 2 after coming through Q1, late laptime shuffle not bumping him forward in the end.

The Championship leader will be joined by Lopez, who crashed twice in Q2 but took P5, with Rossi completing the second row. Garcia spearheads Row 3 ahead of the man second in the standings, Ai Ogura, with Darryn Binder taking P9. Kaito Toba (Red Bull KTM Ajo) rounds out the top 10.

A hugely dramatic Saturday afternoon in Moto3™ sees one title contender suffer as Masia is left with a mountain to climb on Sunday afternoon – and his main rivals all sit inside the top 10. What will the weather bring for another crucial showdown? Find out at 11:00 local time (GMT+1) on Sunday morning!

John McPhee: “It was a tricky session for us because with the conditions looking like it would be dry we had the bike ready to go with slicks and dry settings, and then part-way through Q1 when the other guys were on track we saw it was getting wet and we didn’t know whether to go half-half or fully wet. When the rain started to come down we went for fully wet, which was a good call from the team to do that. It was difficult because the first couple of flaps weren’t so wet and then lap-by-lap there was more and more water to the point where at end of the session there was even some standing water. It was hard to improve but we got a good banker in at the beginning and were able to improve at the end which I was more happy with, because like I said with more water it was more difficult. Overall we’ve been strong in all conditions, in the small dry part we had although it wasn’t fully dry, we were strong as well so I’m looking forward to the race tomorrow. I think we can have a good day.”