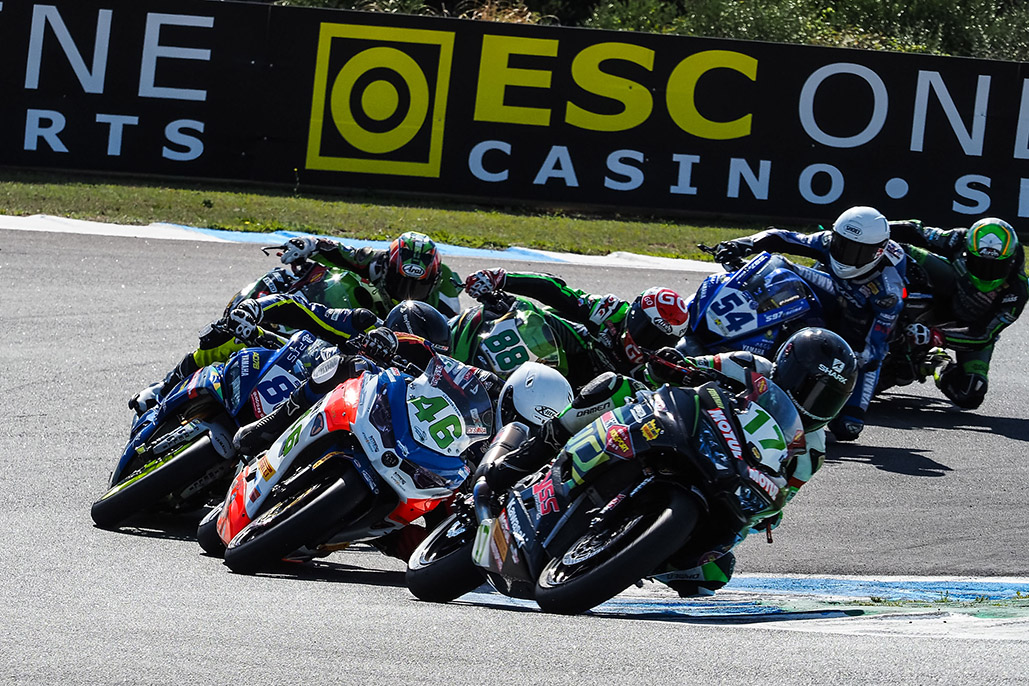 WorldSSP300 season comes to an end in style as Koen Meuffels times the race-winning move to perfection, the tenth different winner of the season.

The battle to win the final FIM Supersport 300 World Championship race went down to the line at the Pirelli Estoril Round as Koen Meuffels (MTM Kawasaki MOTOPORT) claimed his first victory of 2020 after timing the race-winning move to perfection; running second on the run out of the final corner at the Circuito Estoril but using the slipstream to snatch victory from Samuel di Sora (Leader Team Flembbo).

Meuffels and di Sora were able to break away from the chasing group to make it a two-way battle for the top spot on the rostrum. Di Sora led on the final lap and out of the final corner but was outdragged to the line by Meuffels; the Dutchman’s victory meaning all four MTM Kawasaki riders have claimed victory in 2020. Mika Perez (Prodina Ircos Team WorldSSP300) claimed third place as he rounded out the season with another podium, his third podium of the year and his second at Estoril.

Tom Booth-Amos (RT Motorsports by SKM – Kawasaki) had been in the battle for the lead until Lap 7 when he crashed at the final corner and retiring from the race; allowing Meuffels, di Sora and Perez to claim the podium positions. Bahattin Sofuoglu (Biblion Motoxracing Yamaha WorldSSP300) claimed third in the Championship with a fourth-place finish in Race 2, beating Meikon Kawakami (Team Brasil AD 78) by just 0.005s.

Yuta Okaya (MTM Kawasaki MOTOPORT) finished the race in sixth place as he held off the challenge of polesitter Nick Kalinin (Battley-RT Motorsports by SKM-Kawasaki); the Ukrainian finishing in seventh place ahead of Kevin Sabatucci (Kawasaki GP Project). Kalinin was just three tenths away from a podium spot as the season ended in style.

Newly-crowned World Champion Jeffrey Buis (MTM Kawasaki MOTOPORT) battled his way up from 18th place to finishing in ninth, once again showing his strong pace in race situations as he finished almost four tenths clear of Adrian Huertas (ProGP Racing) who rounded out the top ten; holding off the challenge from Mirko Gennai (Team BrCorse) by 0.050s.

2017 WorldSSP300 Champion Marc Garcia (2R Racing) finished in 12th place as his return ended to the Championship ended with a points finish, ahead of Spanish compatriot Unai Orradre (Yamaha MS Racing). Three Yamaha MS Racing riders rounded out the points-paying positions with Ton Kawakami and Alan Kroh battling it out for 14th and 15th just behind Orradire.

Tom Bercot (ProGP Racing) and Jose Luis Perez Gonzalez (Machado Came SBK) clashed on Lap 1 at Turn 6 which forced both riders to retire from the race, while Alfonso Coppola (Kawasaki GP Project) retired after an incident with 2020 World Champion Buis. Filippo Rovelli (Kawasaki ParkinGO Team) had a crash with Alejandro Carrion (ACCR SMRZ Racing by Blue Garage) at Turn 1 on Lap 3; Rovelli retiring from the race but Carrion was able to carry on. Victor Rodriguez Nuñez (EAB Ten Kate Racing) also retired from the race, along with Booth-Amos. Bruno Ieraci (Kawasaki GP Project) was a late retirement from the race as he crashed out on the final lap of the 10-lap race.

P1 Koen Meuffels (MTM Kawasaki MOTOPORT)
“This is perfect. It’s so nice to end the year like this, especially yesterday after the second place. I wanted, so badly, to win. I planned the race in my head, I thought about it all night and everything just went perfectly.”

P2 Samuel di Sora (Leader Team Flembbo)
“It was a very tough rough. The straight here is very long so it’s difficult to make the difference in this part of the circuit. It was a hard battle with Koen and I’m very happy to finish the season like that. We showed everybody our potential and it’s good for next season.”

P3 Mika Perez (Prodina Ircos Team WorldSSP300)
“Today, it was a very hard race. There were a lot of people in the group and all the riders improved their lap times from yesterday, so it was a close race. Finally, I could do a good strategy with the slipstream and I’m so happy to finish the Championship on the podium. It was a really hard season but the team did an incredible job and we were able to finish fifth.”