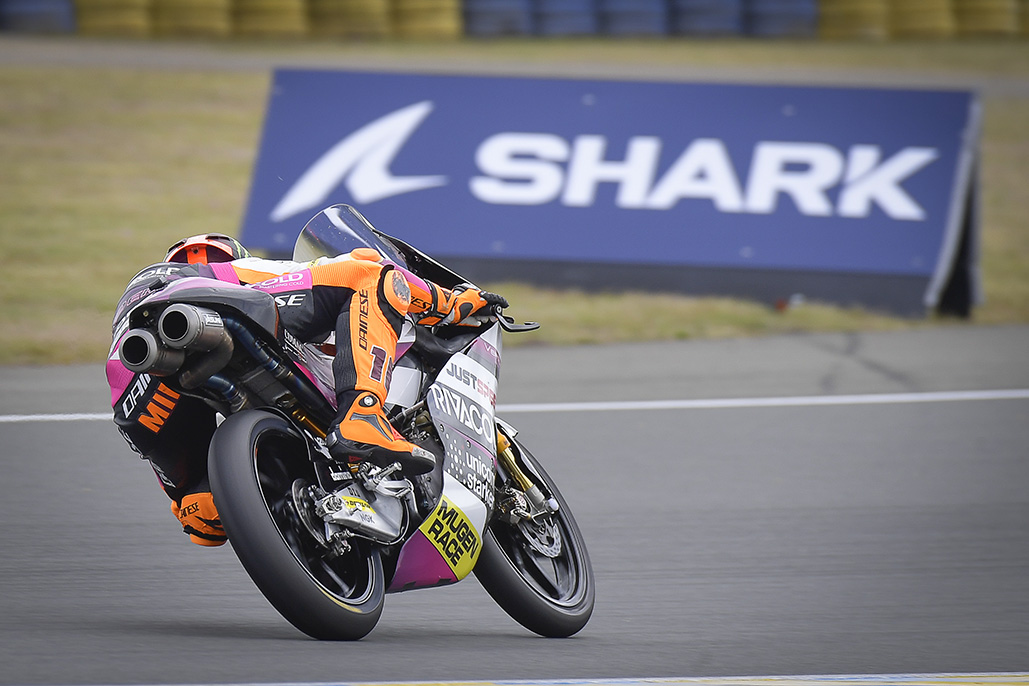 Andrea Migno (Rivacold Snipers Team) pulled out an incredible two seconds on the field in a damp qualifying session at the SHARK Grand Prix de France, the Italian getting into the groove on slicks and the clock proving his only rival by the end of the session. 2.001 is the gap back to a career best qualifying for Riccardo Rossi (BOE Owlride) in second, with Jaume Masia (Red Bull KTM Ajo) completing the front row. The gap from Migno back to Rossi is the largest margin for the rider on pole in Moto3™ history.

All eyes were on Pedro Acosta (Red Bull KTM Ajo) in Q1, with the Championship leader not moving through on Friday – and FP3 then dawning wet. The bad news continued as well, with the number 37 not quite able to make it happen and left a little out of position on the grid outside the top 20. Polesitter in Jerez, it was Tatsuki Suzuki (SIC58 Squadra Corse) who topped the session from Dennis Foggia (Leopard Racing) to move through, the two joined by Filip Salač (Rivacold Snipers Team) and Jeremy Alcoba (Indonesian Racing Gresini Moto3). And then the rain came down…

A few drops at first saw many head out early, but they soon scuttled back into pitlane as it became a very real, although brief, downpour. Suzuki was the first to set a real time once riders headed back on track, before Gabriel Rodrigo (Indonesian Racing Gresini Moto3) took over. Early drama struck for Rossi and Niccolo Antonelli (Avintia Esponsorama Moto3) as they both tumbled out at Turn 11, but riders ok and able to get back out. The rain wasn’t coming back either, so it seemed like whoever went last could well be first..

Masia took to the top three minutes later, but the Spaniard was soon deposed by Deniz Öncü (Red Bull KTM Tech3). And then came Migno. Fastest and then improving a couple of minutes later to go even faster as he got the slicks in the zone, the Italian was on a roll. So too was compatriot Rossi, however, and the BOE Owlride man was able to take over on provisional pole in an impressive bounce back from his earlier crash. But Migno remained on track, and the red sectors were lighting up the timing screens…

Incredibly, as he rounded the final corner and gunned it to the line, the Italian had over two seconds in hand, taking his second pole position of the season in stunning, if damp, style to start the SHARK Grand Prix de France from the front with the largest margin ever. Rossi retains second for his best ever qualifying, with Masia locking out the front row.

Former Le Mans winner John McPhee (Petronas Sprinta Racing) heads up Row 2, joined by Rodrigo and Antonelli despite the crash for the latter early in the session. Salač, despite a highside at the final corner, is another whose damage control was on point as he takes seventh, up and back on track right after the incident. Sergio Garcia (GASGAS Gaviota Aspar Moto3) and Suzuki complete Row 3.

That leaves Darryn Binder (Petronas Sprinta Racing) down in P16 and the South African will be joining Pedro Acosta on the charge forward on race day. Will it be wet, will it be dry? Will there be yet more drama waiting in the wings?

We’ll find out at 11:00 (GMT +2) as the lights go out for the lightweight class race at Le Mans. Rain or shine, it’ll be another stunner – so make sure to tune in!

Andrea Migno: “In the out lap on the first run, arriving at Turn 10 was completely wet, and also there was a crash from Antonelli and Rossi so then everyone went in the pits… I don’t know why but my sensations told me to do another lap just to check the rest of the track because on the first lap it was completely dry, the rest of the track. It was like that, I did the lap alone and it was dry! After, I went in the pits and asked the team whether we should put on wets because the rest of the track was completely dry, so if it didn’t rain again the wet bit would dry out. So we decided together to stay on slicks, and said let’s go out again until the end and hope it doesn’t rain again. At the end my feeling was very good, so I took a good pole position and I’m very happy!”