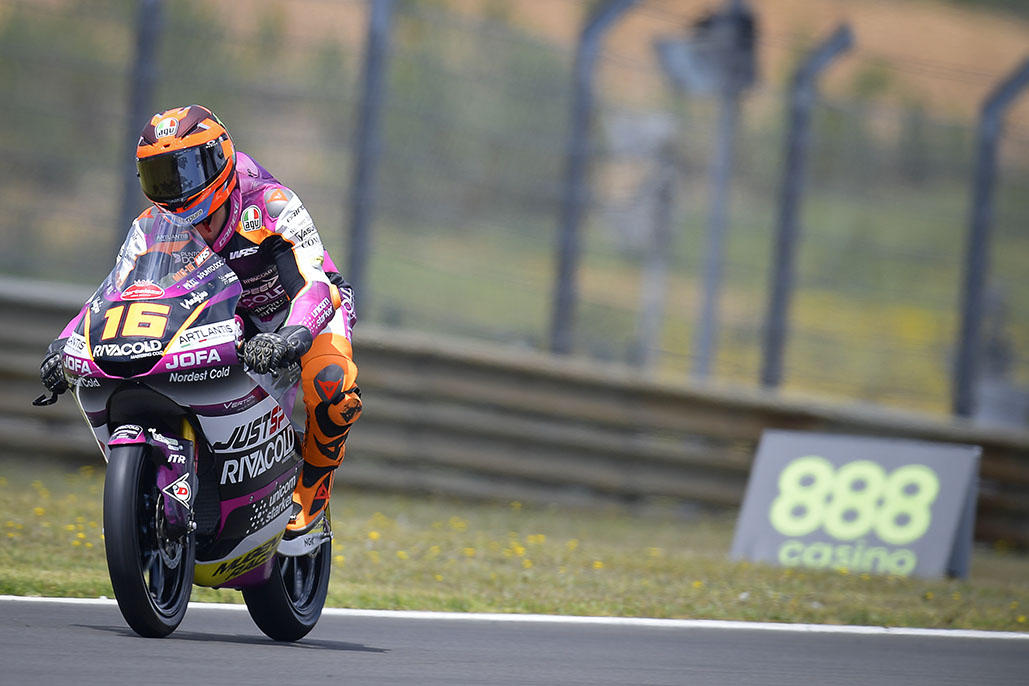 Only just off the lap record, the Italian reigns in Q2 as Foggia takes second but a tenth and a half back.

Andrea Migno (Rivacold Snipers Team) put in a pretty imperious qualifying at the Grande Premio 888 de Portugal, the Italian on top after the first runs and coming over the line in the final push to secure his second Grand Prix pole position. He pulled out a tenth and a half on last year’s podium finisher Dennis Foggia as the Leopard Racing rider takes second, with Jeremy Alcoba (Indonesian Racing Gresini Moto3) third quickest but set to start from pitlane – plus a five second delay – on Sunday.

Once Q2 began and the first runs were done, Migno was already top of the pile. The Italian has had good pace all weekend and as the grid filed back out for one final push, was very much the man to beat. Niccolo Antonelli (Avintia Esponsorama Racing) didn’t quite make the cut as he ran out of time to make it to the line though, and a couple more key rivals for Migno’s provisional pole wouldn’t make it round either as Salač collided with Friday pacesetter Gabriel Rodrigo (Indonesian Racing Gresini Moto3) and both went down. The Argentinean had looked like a good bet to threaten for pole, but instead headed for a check up at the Medical Centre, rider ok.

Meanwhile, the freight train thundered on and over the line, a few improved but only Alcoba was able to take over from Migno at the top. It didn’t last long though and Migno hit back to better his own time and snatch back pole position. Foggia splits the two, but with Alcoba to start from pitlane it will be fourth quickest Sergio Garcia (GASGAS Valresa Aspar Team) who takes the final place on the front row.

Rodrigo was fifth quickest in the end, just 0.009 off Garcia, but the Argentinean will start fourth as Alcoba leaves the grid for pitlane. John McPhee (Petronas Sprinta Racing) was sixth quickest but is another with a pitlane start – his with a delay of 10 seconds – so Deniz Öncü (Red Bull KTM Tech3) capitalises. Darryn Binder (Petronas Sprinta Racing), who’s second in the standings, has had a slightly more muted weekend in Portugal so far and was next up.

Xavier Artigas (Leopard Racing) put in one of his best performances of the year so far and was ninth fastest and set to move up, with Q1 graduate Sasaki tenth quickest after a significantly better Saturday than in Qatar. Speaking of Qatar… the Red Bull KTM Ajo duo of Pedro Acosta and Jaume Masia took a win apiece in the desert, but it’s not been quite the same pace yet in Portugal. Masia got the upper hand as he was 11th, and Acosta 12th although he didn’t take the fastest rookie honours this time around. However, the Spaniard did just win from pitlane, so that seems more molehill than mountain…

Tatsuki Suzuki (SIC58 Squadra Corse) was next up ahead of Fenati, with rookie Izan Guevara (GASGAS Valresa Aspar Team) just behind the veteran Italian. Adrian Fernandez pipped Antonelli, with Salač relegated to last in Q2 after his earlier exploits saw him lose out on a second push.

That’s it from Saturday in the Moto3™ class and Migno launches from pole for the first – and only – time since Valencia 2019. Can the Italian hold off the rest on the charge? Find out on Sunday at the slightly different time of 11:20, and that’s GMT +1 in Portugal.

Andrea Migno: “In FP3 we were strong, I’m happy about the feeling I have with the bike and happy about qualifying. Tomorrow in the race maybe it’ll be a normal Moto3 race, some group of course! But we’re ready to fight and we’ll see what happens tomorrow and just and try and enjoy the race.”