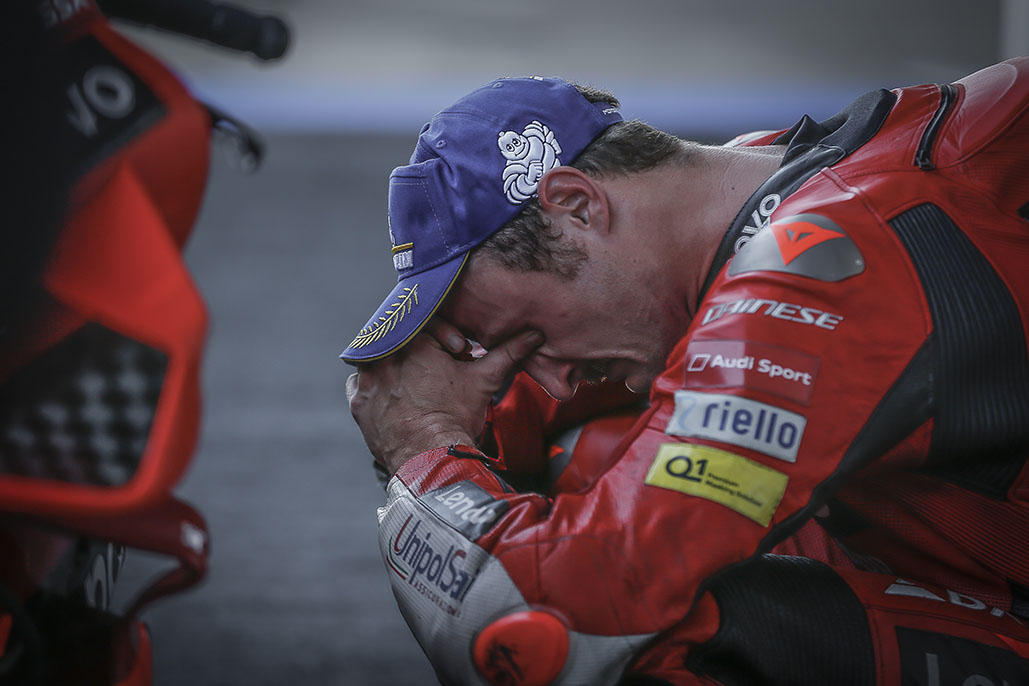 A first win in red, a first since 2016 and Ducati’s first 1-2 in three years? The Spanish GP had thrills, spills and a few surprises.

There are few sweeter feelings for a rider than standing on the top step of the MotoGP™ podium, but doing it for the first time in five years and the first time as a factory Ducati rider adds something special. Add in two muted races, a little dash of drama, surgery and then a crash last time out on the run up to the Gran Premio Red Bull de España and Jack Miller’s (Ducati Lenovo Team) emotion in parc ferme is even easier to understand. It was a masterclass to boot as the Australian got the holeshot, fought it out at the top, reeled in early leader Fabio Quartararo (Monster Energy Yamaha MotoGP) and then kept it pinned, coming home to lead the first Ducati 1-2 since 2018 as teammate Francesco Bagnaia showed more speed for second. Franco Morbidelli (Petronas Yamaha SRT) went one better than Portugal to complete the podium, keeping that momentum just as hoped and taking top Independent Team rider honours. Quartararo eventually finished just inside the points.

Starting from the outside of the front row, Miller grabbed the holeshot as poleman Quartararo lost out slightly. The Frenchman was swamped into the first corner and found himself down in fourth, just ahead of Aprilia Racing Team Gresini’s Aleix Espargaro, who had a strong start to find himself in fifth. Down the back straight for the first time it had settled into Miller leading the way, from Morbidelli and Bagnaia that way round early doors.

There was quick drama a little further back for a couple of riders. LCR Castrol Honda’s Alex Marquez crashed out on the opening lap and he was later joined in the gravel by Red Bull KTM Factory Racing’s Brad Binder, who crashed out at the start of Lap 2.

At the front though, Bagnaia and Quartararo began to duel for third. First, the Frenchman moved up the inside in the opening sector before the Bologna bullet of Bagnaia motored back past down to Turn 6. Then, for a second time, Quartararo got in front of Bagnaia, this time at the final corner. Going defensive into the first corner to make sure it stayed like that, the job appeared done.

On Lap 3 we had faller three of the Spanish GP as Alex Rins (Team Suzuki Ecstar) made it a fortnight to forget with a second consecutive crash, wide at Turn 6 and the front-end then washing away to end his Jerez hopes and loe his chance to unleash what looked like some impressive pace.

Meanwhile, Quartararo dived up the inside of former teammate Morbidelli for second as his charge back to the front continued, with Aleix Espargaro finding a way through on Bagnaia for fourth at the same time.

El Diablo’s plan was coming together. He hit the front soon after with an inch-perfect move on Miller into the final corner, and alarm bells were surely ringing for Morbidelli in third as the factory Yamaha man put the hammer down immediately and stretched out four tenths over the Australian in the space of a lap. A new lap record around the Circuito de Jerez – Angel Nieto a lap later and Round 4 of the MotoGP™ World Championship was following the 22-year-old’s script to a tee. So far…

Miller has admitted in recent weeks that he’s been in the trenches following a disappointing start to the year, but he was certainly gritting his teeth and digging in. Quartararo was only able to go a tenth quicker than the Ducati man and the gap was at three quarters of a second with seven laps completed. As the Frenchman edged his lead out to over a second for the first time, Aleix Espargaro slipped a place back to fifth after falling into the crosshairs of Bagnaia’s Ducati down the back straight too. But as one Ducati rider moved forward, another crashed out: rookie Enea Bastianini (Avintia Esponsorama) hit the deck at Turn 2 – his first DNF of the year, although he continues leading the Rookie of the Year standings.

Bagnaia, meanwhile, had seen off the close attention of Aprilia’s Espargaro and had attached himself on to the rear wheel of Morbidelli. His first look up the inside came down the hill into Turn 6, but no way through. The pair of VR46 Academy partners continued to look inseparable in the fight for the final podium place, before Bagnaia finally got his own way at the final corner. He capitalised on a mistake from the Petronas man perfectly, moving through.

Suddenly at the front, it wasn’t the plain sailing we’ve become accustomed to for Quartararo once he’s out in the lead. The Frenchman’s advantage was cut from nearly two seconds down to nothing in the space of just one lap and it was well and truly game on for Spanish GP glory, with ten laps remaining. Incredibly, Miller then took the lead down the start-finish straight to start Lap 16 of 25, with Quartararo’s progress halted and the Frenchman seemingly fading. In the space of half a lap, the Australian was half a second clear and it only grew.

As Miller got to 1.5 clear, Quartararo behind was nearly a second slower than Bagnaia and Morbidelli and his hopes of a podium finish had evaporated. He was a sitting duck as both the Ducati and Yamaha men scythed through and they were queuing up behind the World Championship leader soon. With seven laps to go Takaaki Nakagami (LCR Honda Idemitsu), reigning Champion Joan Mir (Team Suzuki Ecstar) and Aleix Espargaro all pushed their way past to demote him down to seventh, but the Aprilia ended up a slight loser in that fight too as he lost out to both Nakagami and Mir in the shuffle.

Five laps of a remarkable race remained and Quartararo soon pushed outside of the top ten by Pol Espargaro; a statement that was unthinkable just ten minutes earlier. A couple more laps ticked by and it seemed there could be drama brewing at the front too. Miller’s lead was cut down to just a second by teammate Bagnaia as some tension suddenly appeared for the Aussie. Could the Thriller hold on for a first Ducati victory? They were a nervy final few laps but the number 43 kept his cool and, for the first time since the 2016 Dutch TT, took victory ina MotoGP™ race – Ducati’s first in Jerez for 15 years.

Bagnaia put in another top performance to come across the line in second too, making it a first 1-2 for Ducati in just under three years and the first they’ve ever had at Jerez. There was huge delight for Morbidelli in third as well and the Italian thumped his chest with joy and declared it “as good as a victory” in Parc Ferme. There was yet more Jerez delight for Takaaki Nakagami as the LCR Honda Idemitsu man matched his career-best MotoGP™ result with fourth place too, the Japanese rider seeing off a late charge from Mir, who was forced to settle for fifth.

Aprilia finished the closest they have ever been to a MotoGP™ race winner, 5.164 seconds adrift of Miller, but in sixth so Aleix Espargaro still wanted more, such is their step forward so far in 2021. Monster Energy Yamaha MotoGP’s Maverick Viñales clinched seventh place, ahead of Pramac Racing’s Johann Zarco in eighth.

Repsol Honda completed the top ten as Marc Marquez bounced back from his Warm Up crash – and Saturday crash – to take a commendable ninth place as he returns from injury. The final place inside the top ten went to the eight-time World Champion’s teammate Pol Espargaro, ahead of Miguel Oliveira (Red Bull KTM Factory Racing) and HRC wildcard Stefan Bradl.

Quartararo eventually limped home in thirteenth and, as a result, surrendered the lead of the MotoGP™ World Championship. The Frenchman was in visible pain on the cool down lap and seemingly suffered with his arm. So, as we head to Le Mans for Round 5, Bagnaia leads the premier class title chase for the first time in his career but has just a two point lead over what will be a fired-up Frenchman on home soil next time out. Danilo Petrucci (Red Bull KTM Tech 3) and teammate Iker Lecuona completed the points.

So that’s it from the Spanish GP and a day Jack Miller will remember forever. Tune in for more from the classic Le Mans circuit in just two weeks’ time, and get ready for another shuffle as MotoGP™ continues to deliver in one of the greatest eras ever. Can Quartararo bounce back or is the French town to be painted red?

Jack Miller: “I just tried to do what I could, I did a lot of laps all weekend by myself and I knew I had reasonable pace and when Fabio came past I thought ok I’ve got a bit better pace. I dropped down into the 37s for a few laps there with him but I wasn’t able to maintain that, but neither was he. I didn’t expect him to drop back to me but he did. I was just able to.. I knew I had a bit of a gap behind me and if I could get past Fabio, I could see he was struggling. Get past him, get my head down, make no mistakes and just try to punch out the laps. Those last seven or eight laps were the longest of my career. I mean, it’s just indescribable what I’m feeling right now, it’s a flood of emotions: happy, sad, everything. I wish my parents were here to celebrate it with me but they’re back at home, I know they’ll be celebrating. I want to thank everyone for all their support, I’ll try do it again soon.”