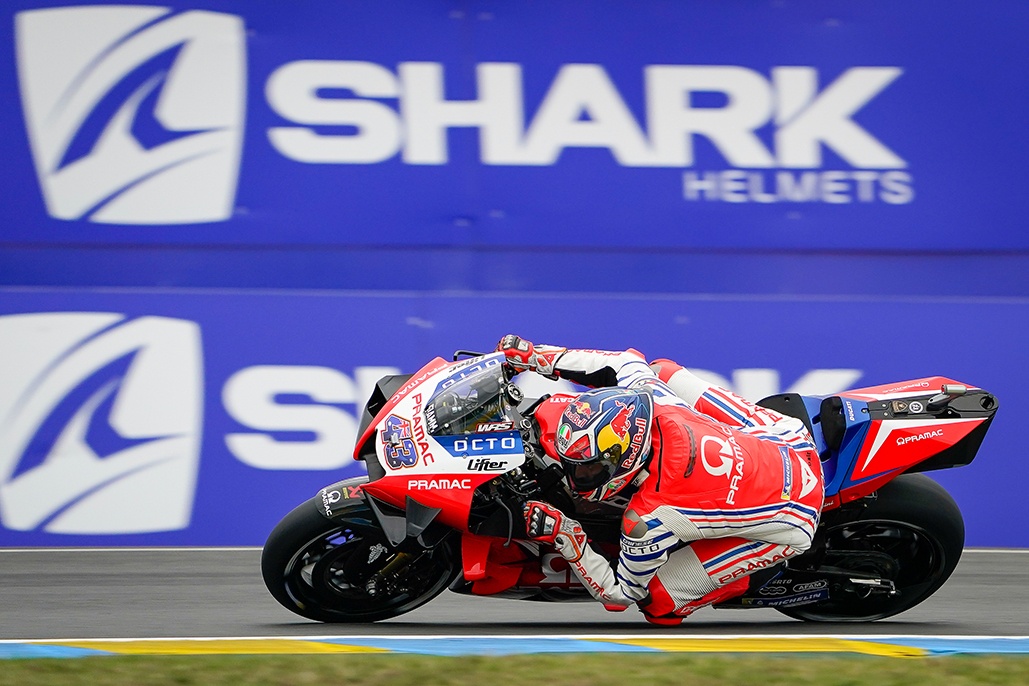 The Australian tops Friday in France by a tenth and a half ahead of Viñales, with Quartararo, Dovizioso and Rossi outside the top ten on Day 1.

It was a mixed bag greeting the grid on Day 1 at the Shark Helmets Grand Prix de France, with a wet FP1 giving way to a dry-ish FP2 and that presenting an interesting set of challenges for the grid. The man on top by the end of play was Jack Miller (Pramac Racing), with the Australian demonstrating his by-now characteristic mastery of tricky conditions to grapple to the top of FP2. Maverick Viñales (Monster Energy Yamaha MotoGP) wasn’t far off in second, a tenth and a half down, with Takaaki Nakagami (LCR Honda Idemitsu) completing the top three but a good three tenths off the top.

FP1
In contrast to the intermediate and lightweight class sessions, MotoGP™ FP1 actually went pretty smoothly without incident. In the wet, cold morning conditions it was Bradley Smith (Aprilia Racing Team Gresini) who struck late to take to the top, the Brit a tenth and a half clear. Overnight rain and a continued light mist of dampness and rain kept it wet, but by the end the laptimes were coming down.

Pol Espargaro (Red Bull KTM Factory Racing) was quickest in the early stages before Andrea Dovizioso (Ducati Team) took over at the summit, with Jack Miller then taking P1 with just under 25 minutes to go despite a small scare when entering pitlane. Teammate Francesco Bagnaia next made it a Desmosedici 1-2-3, before Maverick Viñales went fastest. Wet weather specialist Danilo Petrucci (Ducati Team) was next up as he took over by nearly two tenths, before compatriot Franco Morbidelli (Petronas Yamaha SRT) hit back with around 15 minutes to go.

With eight minutes left, Miller and Petrucci exchanged fastest laps before Viñales ruined the Borgo Panigale party, but ultimately, it would be Smith who rose to the fore to claim a memorable P1. Home hero Johann Zarco (Esponsorama Racing) then impressed to take second on his last flying lap.

Zarco became the first of a Ducati armada completing the top five, with Petrucci, Miller and Dovizioso making it four out of five for the Bologna bullets near the top. Viñales was sixth ahead of Morbidelli and Valentino Rossi (Monster Energy Yamaha MotoGP). Cal Crutchlow (LCR Honda Castrol) pipped Pol Espargaro to P9.

So where are the top two in the Championship? Leader Fabio Quartararo (Petronas Yamaha SRT) was down in P18, and closest challenger Joan Mir (Team Suzuki Ecstar) in P13. Mir, however, was just behind teammate Alex Rins as both Suzukis put in high 1:44s.

FP2
As the riders emerged for FP2, track conditions were still very tricky but most definitely improving. Valentino Rossi was first out on slick tyres but nearly four seconds slower than early pacesetter Mir, the Spaniard completing two flying laps on wets tyres to set a 1:43.515. Miller and Quartararo were two of a few riders who went out on slick tyres early on too, but they immediately came back into pitlane; risks seemingly outweighing rewards at that stage.

Zarco was then lapping on wets over five seconds quicker than Rossi, confirming that track conditions weren’t good enough for slicks just yet. Zarco had got his time down to a 1:40.943 though, nearly three seconds quicker than Bradley Smith’s FP1 pace, but a brave Australian was about to move the goalposts. In a classic Miller move, the Pramac rider headed out on slicks again in iffy conditions… and started setting red sector times. The Aussie slammed in a 1:39 and then got down to a 1:37.738 to go two seconds quicker than Zarco, proving it could well be slick tyre territory with half an hour of Friday action to go.

Miller was soon well into the 1:36s and lapping over three seconds quicker than anyone else. This, of course, convinced many to try the same. Mir slotted into second, but 3.2 seconds adrift of the Ducati man, although by 20 minutes to go the Suzuki rider had chopped Miller’s advantage down to under two seconds. Iker Lecuona (Red Bull KTM Tech3) then shot up to P2 with an impressive 1:36.967, just half a second off Miller.

All the riders were then out on circuit and the times just kept tumbling. Nakagami demoted Miller to P2 before Alex Rins took over at the top, but the Japanese rider then became the first rider to dip into the 1:35s and hit back. With around 10 minutes left, the riders were starting to push. Some, too much. Aprilia duo Smith and Aleix Espargaro were down at Turn 12 and Turn 3 respectively, Smith suffering a nasty-looking highside but rider ok, and then Dovizioso crashed. We don’t say that too often, but the Italian slid into the gravel at Turn 3, rider ok.

In the meantime, Rossi had slotted himself into P4 behind Nakagami, Rins and Lecuona, with early hero Miller shuffled down to P5. Cal Crutchlow (LCR Honda Castrol) then found himself at the summit, but it wasn’t for long for the Brit. First Morbidelli and then Miller again beat the British rider’s time, the Australian 0.8s clear at the top to move the goalposts again.

Viñales then cut the gap to half a second despite running off and into the gravel a lap earlier at Turn 8, before Petrucci and then Nakagami pipped the number 12. The conveyor belt of faster laps looked like it would continue too as with a minute to go, Nakagami set three red sectors. Alas, the Japanese rider then suffered a small tip-off at Turn 11 – rider ok but out of the battle for the top on Day 1, also bringing out the Yellow Flags and that causing a couple of late cancellations for those behind him…

That included Miller as an even quicker lap from the number 43 got cancelled, but the Aussie retained his place at the top. That coupled with a P4 in FP1 sees Miller on form in France; a venue where Ducati have never won. Viñales, who has won at Le Mans, took second overall by a tenth and a half, moving up from P6 on Friday morning. Nakagami completed the top three despite the late incident.

Petrucci ended the day P4 to make it a good Friday for the Italian, he leads fifth place Crutchlow as the duo claim double top 10s in FP1 and FP2 to head into Saturday’s in good shape. Alex Marquez (Repsol Honda Team) went well to claim P6 in FP2 and overall on Day 1.

Morbidelli and Pol Espargaro finished P7 and P8 respectively, another two riders to be inside the leading 10 riders in both the wet and dry-ish conditions. Mir was ninth on the opening day to finish just over a second off Miller’s time, ahead of Zarco in P10. The Frenchman lost a lap in the aftermath of Nakagami’s crash, but he edges out Championship leader and compatriot Fabio Quartararo as ‘El Diablo’ ends Day 1 in P11.

The man in 12th suffered the same fate, Rossi losing his last lap, and Alex Rins was shuffled down to P14 overall. Dovizioso, after his crash, ends Friday in 19th and with an even bigger mountain to climb.

How will FP3 change the game? The final session to decide the direct entrants to Q2 begins at 09:55 local time (GMT+2). Will it be dry? Can the field improve their times? Quartararo, Rossi, Rins and Dovizioso will all have their eyes on the sky on Saturday morning, before qualifying then starts at 14:10 and the grid for the Shark Helmets Grand Prix de France gets decided.