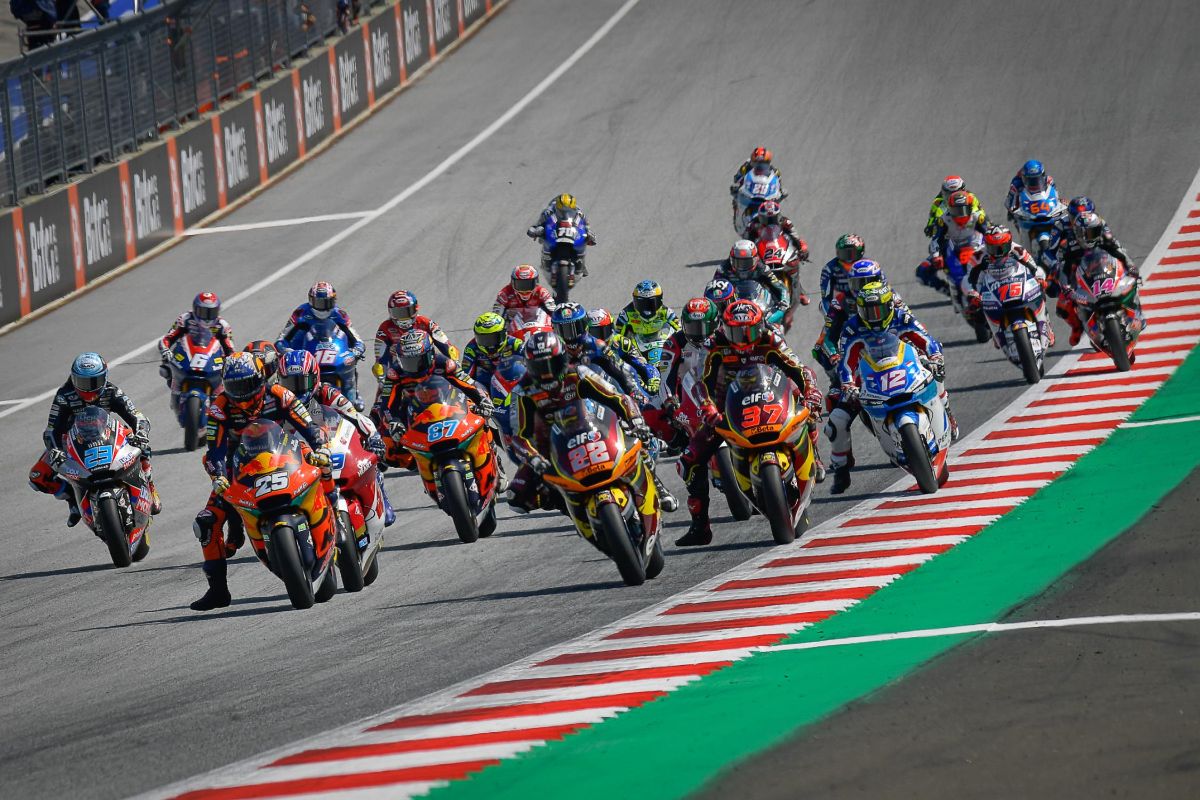 Picture the scene: you’ve bounced back from your toughest race of the season to take a stunner of a win, and in doing so you’ve wrestled back the momentum and closed the gap to your teammate, the Championship leader. What you probably want less than anything as the next round on the calendar is a track you’ve only ever raced once before, in a different class, that’s familiar turf for the rider you’re chasing. But such is the challenge for Raul Fernandez (Red Bull KTM Ajo) as Moto2™ arrives at Silverstone.

There’s good and bad news all round though. For Raul Fernandez it’s that he qualified on the front row when he did race at Silverstone in Moto3™ in 2019, and that his speed this year in the intermediate class hasn’t particularly correlated with whether he’s raced a venue 20 times or two. It’s just correlated with being extremely fast, very consistent, and largely error-free.

For Remy Gardner (Red Bull KTM Ajo), the rider atop the standings, the same can be said but his previous experience also makes for good reading – including on Moto2™ machinery. Silverstone saw him take his second best result of the 2019 season, a fourth place, on his last visit to the track and he may not have been quite in the driving seat at the Red Bull Ring but he remains so in the standings. That’s why risk vs reward is key, isn’t it? Because not every race will be a win. And 2021 Gardner did in Austria what 2021 Gardner does very well: keep his head when it doesn’t quite go to plan, and bring it home for some valuable points. Will the Aussie make it his mission to strike back?

Marco Bezzecchi (Sky Racing Team VR46), meanwhile, had an even tougher bump down the order from Styria to Austria. Taking his first win of the season in style first time out at the Red Bull Ring, his second weekend at the track saw him come home in a muted 10th place. He’ll want revenge but hasn’t got the same experience of Silverstone as many, so he’ll be pushing to cut any initial deficit quickly.

One rider with a lot of experience, however, is the home hero: Sam Lowes (Elf Marc VDS Racing Team). The Brit has plenty of kilometers – or more fittingly, miles – under his belt at Silverstone, and he’s had a bit of a tougher run of late but took a solid fourth last time out as a good springboard heading onto home turf. Can he get back on the podium in front of a home crowd who’ll be cheering him on? He’ll certainly be pushing to the limit to try.

The last Moto2™ winner at Silverstone is the rider on the other side of the Elf Marc VDS Racing Team garage though: Augusto Fernandez. And after a start to the season he describes as on the pace but crashing away the points, the Spaniard has managed to keep digging deep to find a seam of impressive consistency of late. His best ever in terms of the rostrum, in fact, with three in a row. Will that continue at a venue he’s tamed more recently than anyone?

Ai Ogura (Idemitsu Honda Team Asia), on the other side of the coin, faces the same conundrum as Raul Fernandez as he arrives on the crest of a wave, in his case a first intermediate class podium, to a venue he doesn’t know well. Can he reel in the others who also count on a little less experience of Silverstone who’ve been pipping him on Sunday – the likes of Raul Fernandez and Bezzecchi – to stay in that frontrunning postcode?

Ogura is also now equal on points with Fabio Di Giannantonio (Federal Oil Gresini Moto2) too, but the Italian will be pushing to make his experience – including a top six in 2019 – count in trying to pull that gap back out. And what can Aron Canet (Kipin Energy Aspar Team) do? He needs to find some consistency as he’s already found impressive podiums, but he’s only just inside the top five, one point ahead of Augusto Fernandez and only three ahead of Ogura down in eighth. The fight behind Lowes in the standings is only getting tighter…

19 points now separate Gardner at the top from his teammate in second, and the two arrive with two very different hills to climb at Silverstone. Can Raul Fernandez hit the ground running? Can Gardner turn the tables? Or will those snapping at their heels in the standings come out swinging in the Monster Energy British Grand Prix? We’ll find out on Sunday the 29th of August, but make sure to tune in for Moto2™ at the later time of 14:30 (GMT +1).